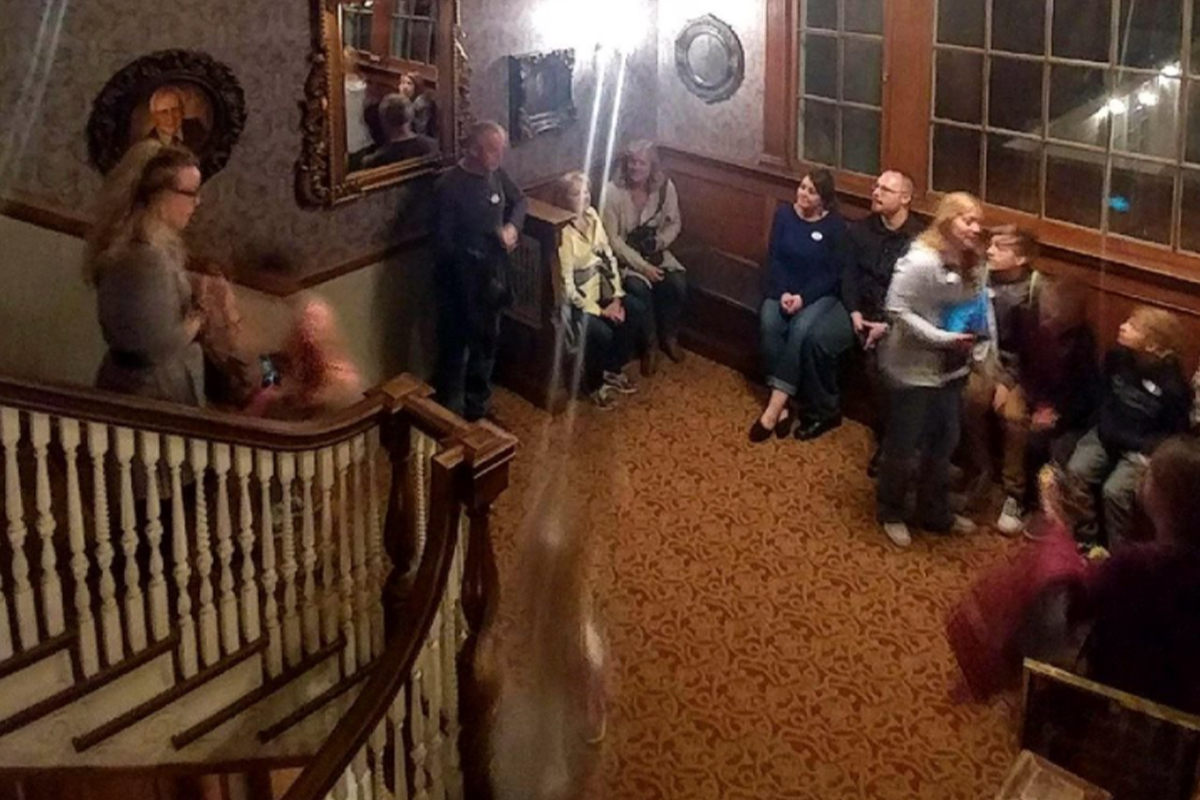 A couple took a tour of one of the “most haunted” places in the United States and came back with an incredible picture no one, not even their tour guide, can quite explain.

Jessica and Jay Mausling took a “Night Spirit Tour” of the Stanley Hotel in Estes Park, Colorado, an hour north of Denver. The Stanley is a beautiful hotel, but also so spooky that Stephen King used it as inspiration for his famous 1977 ghost story The Shining and the subsequent Jack Nicholson film that had people running out of movie theaters in terror.

The history of the hotel, which was built in 1909, is long and includes some ominous events like a gas explosion in 1911.

During the night tour, guests are encouraged to take as many pictures as they can — perhaps that ups the odds of capturing a photo of some paranormal activity? Apparently, it works.

You tell us what they captured here — looking closely at that white-dress-wearing girl that not a single person on the ghost tour appears to notice.

“Even if you look at the picture, you notice no one is looking there. You just don?t excuse something like that. My initial reaction was ?no way,'” Jay Mausling told Inside Edition.

Jessica says she contacted the hotel to ask if a little girl had stayed at the hotel that day and they told her no, not a single guest room had a transparent little girl staying in it — though the tours are open to the public as well as hotel guests.

The most common complaints at the Estes Park hotel, according to Bustle, are “items moving or lights flicking on and off on their own; some have also reported hearing children laughing or finding what looks like the imprint of a child-sized body on unused beds.”

Other ghostly figures have been observed during Stanley Hotel tours over the years as well.

The Stanley Hotel is Basically a 24/7 Ghost Tour

By golly! I think I may have captured a #ghost at #StanleyHotel. #EstesPark

The Stanley is so rife with unexplainable phenomena that ghost hunters frequently visit the haunted hotel for some supernatural sightseeing. Pretty much from the moment you check in you’re on ghost watch. The lodge offers private tours, day tours, and night tours throughout the hotel and its haunted rooms, though fair warning, you may need to hit the whiskey bar or the hot tub to chill out afterward if you’re the traveler type who isn’t a fan of having a ghost hassle you.

The Stanley Hotel is located at 333 E Wonderview Ave, Estes Park, CO 80517. Currently, night tours are limited to ten people at a time and masks are required to protect from COVID. Tickets are $28 per person for visitors and $25 per person for hotel guests.

But don’t worry, if getting your pants scared off isn’t your thing there are plenty of other activities around. If you don’t want to explore the afterlife you can check out the Rocky Mountain National Park instead. Or go white water rafting. Or biking. Or check out downtown Estes Park. You don’t have to wander into the mouth of hell, though it seems pretty cool.

This story was originally published October 15, 2017.

Watch: Good Luck Sleeping Tonight if You Watch This Spooky Video of a Ghost Caught on Camera