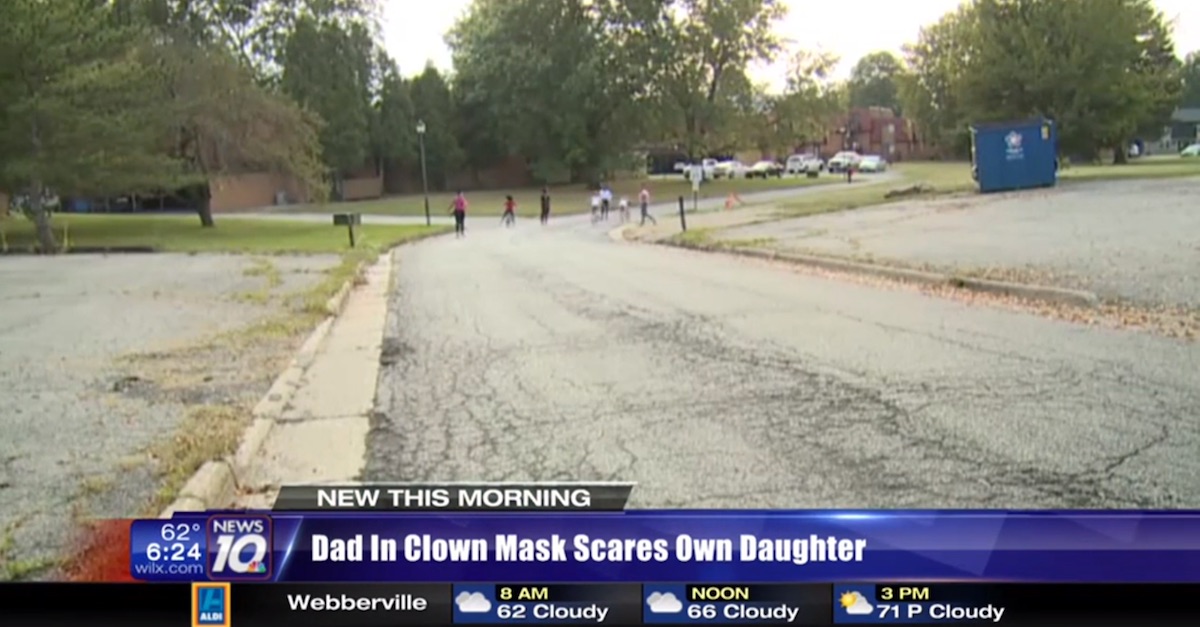 A Boardman, Ohio dad who had apparently decided to scare his 6-year-old daughter into behaving by chasing her around the neighborhood in a clown mask nearly lost his life at the hands of an inebriated, gun-wielding neighbor.

RELATED: Her husband waited until she was fully relaxed in the tub to pull the scariest killer clown prank of all time

A clown-masked Vernon Barrett Jr. chased his 6-year-old daughter out of their apartment on Saturday in attempt to scare her into good behavior at home and school.

The child did not react well, running down the street and jumping into a stranger’s car, saying that a clown was chasing her. That stranger called the cops, but the girl took off again and ran into someone’s unlocked apartment.

As WKBN reports, this is when things got really dangerous. Dion Santiago, whose apartment the girl ran into, spotted Vernon Barrett Jr. wearing the clown mask and, not knowing he was the girl’s father, fired a warning shot in his direction. Santiago would be charged for using a weapon while intoxicated, adding yet another layer to this story. Police said Santiago consumed a few beers before he discharged his firearm.

When the police arrived, Santiago yelled ?that?s him right there officer!? The father and neighbor got into a screaming match and Barrett Jr., according the police report, said “I’ll catch you next week” to Santiago.

RELATED: These clowns are facing the consequences after leaving their 4-year-old kid home alone to take part in this prank

Barrett Jr. has been charged with child endangerment and inducing panic for his disciplinary “tactic,” while Santiago was charged with using weapons while intoxicated.