A 58-year-old director of music publishing at Disney living in California is accused of sexual abuse of two underage girls dating back to around a decade ago, although it wasn’t specified exactly when the alleged incidents occurred.

Variety named the employee in an exclusive report on Friday as Jonathan Heely, who now faces three counts of lewd and lascivious acts on a child.

Heely, according to the report, was arrested on Nov. 16, was held for six days, released on $150,000 bail and was finally suspended by Disney on Friday.

Disney said through a spokesperson that the suspension decision was handed down “immediately” after learning of the arrest.

“Immediately upon learning of this situation tonight, he has been suspended without pay until the matter is resolved by the courts,” the spokesperson told Variety.

The victims have not been named. One victim claims abuse from when she was 11 until she was 15, while the other alleged that the incident occurred when she was 15.

RELATED: A woman was arrested for choking a teenager at Disney World, and the reason she did it is even more absurd

Heely, through his attorney, has “vehemently denie[d] these allegations,” adding, “It’s a shame, that’s all I’ve got to say.”

The New York Daily News and Variety both noted that a Twitter account started in 2014 by Heely listed “Disney Concerts and living to glorify God in all things” as his interests. 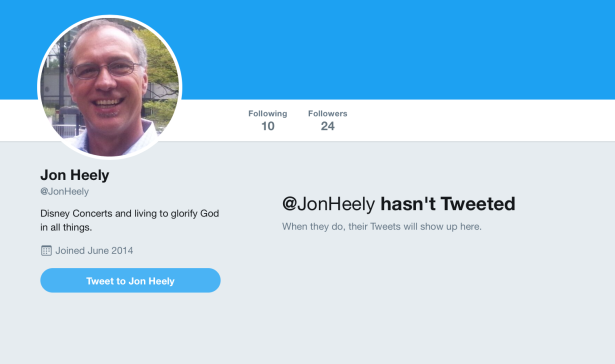