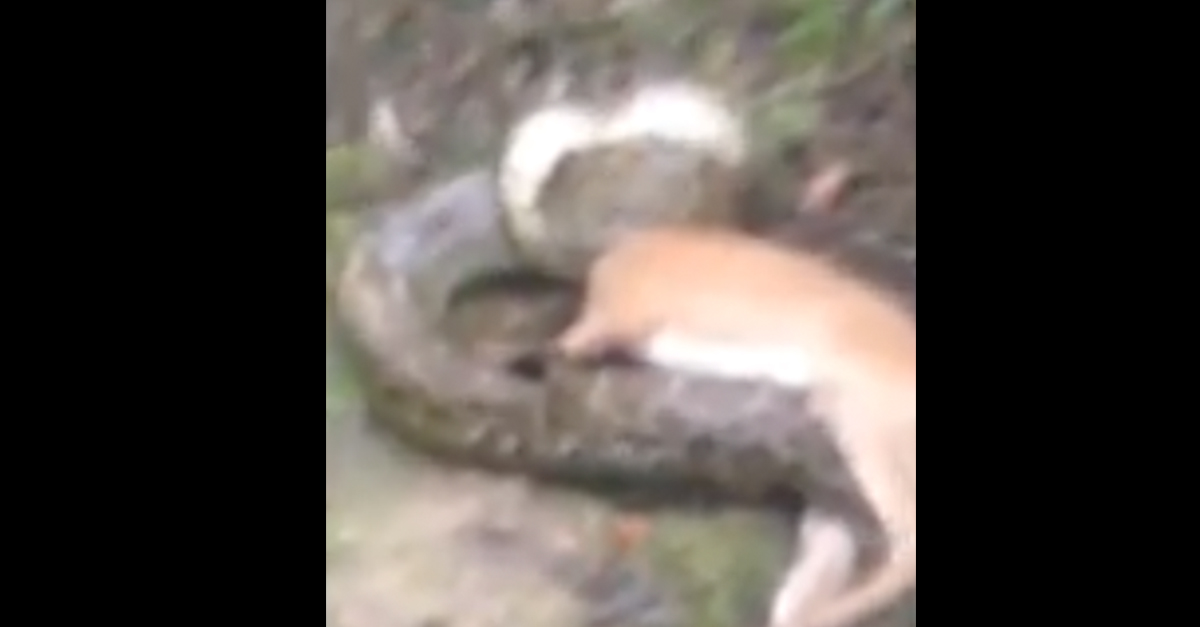 Hunter Jimmy Wilson was out and about in the apex-predator filled hellscape that is the Florida Everglades when he stumbled upon the chilling sight of monstrous python squeezing the life out of a small, helpless deer.

The Florida man, who is from Miami, was hiking near Ochopee and found the python with the deer in its death grip. Because he has stones the size of python eggs, Wilson started filming instead of running away and crying.

Being squarely on #TeamMammal, however, Wilson decided to intervene. Wilson started shooting the python and the snake released its grip on the deer. The python attempted to slither back to hell, but Wilson made sure it wouldn’t get far, finally killing the snake after several more shots.

Wilson then approached the deer and tried to get it to get up and run, but the animal was clearly in shock.

Wilson eventually got the deer to get up and run off to safety — or, at least, somewhere slightly less dangerous than the place where the snake attempted to strangle it to death. This is still the python and gator infested Everglades, after all.

A friend of Wilson’s told the Naples Daily News that the video was actually from a few months ago and that he recently got a hold of it at a barbecue.

“It’s one of a kind, it’s unique, it’s fascinating,” David Chambers said. “I think this can shed light on an important issue.”

The issue of which Chambers was speaking is the danger the invasive pythons pose for the Everglades ecosystem.

1. Again, the balls on this guy. He sees a python so strong that it could legitimately pop his head off of his neck over there snacking on some big game and Wilson is like, “Better murder this thing.” Then he walks right up to it, to the point that he’s standing on top of it, and calmly empties a clip into the bastard, all the while within striking distance.

2. I would rather compete in The Hunger Games than be a deer living in the Florida Everglades.

This story was originally published September 5, 2016.