Nick Lutz had the first and last laugh when he received and read the rambling, substance-less, four-page, hand-written apology letter from an ex-girlfriend after rumors swirled that she had cheated on him.

RELATED: Girlfriend finds out her boyfriend is cheating on her through comments on Burger King’s Instagram

The college student at Stetson University in Florida marked up the letter with red pen, gave it a D-minus and shared the letter on the internet for the world to see.

When your ex writes you an apology letter so you grade it to send it back pic.twitter.com/MczdjcCiil

The relationship ended poorly, and, judging by the letter, it wasn’t Lutz’s fault. He even asked for proof that she hadn’t cheated on him.

We’re going to just type out the whole transcript because this is rich.

This is my only way to get to you. I know you don’t want anything to to with me. I know you would rather me just become nonexistent. Sometimes I do too. By this time you have probably already figured out who this is — hell, you might just even stop right here and not continue reading this, and that’s fine. Maybe you might pick this up again in a day or two, or a month, or a few years from now. Nothing that I am going to say is going to change no matter the time. A lot has happened and I know it has. I know you are probably thinking you are wasting your time reading this, and you might be. It’s hard to imagine there is nothing left of us. I saw you the other day and couldn’t help but cry. You know the saying “You never know how much you had till it’s gone,” that’s how I feel. I took you for granted, I begged for you back, and I ended up falling on my part, and not holding up my end of everything we had. Coming out of all we had you have taught me so many things.You showed me what it looked like when a guy truly [illegible]. You might regret everything between you and I. If I were you I would too. I always complained that you were the one too immature and never taking anything seriously — seems like it was the other way around. I started irrelevant arguments. if there was one thing I never did to you no matter if you believe me or not — I never cheated on you. I promise that on everything. All of me, my mom, my Jeep, literally everything. I never thought about it, nor could I ever put my heart to do that, especially to you. I just couldn’t ever do that […]

Lutz marked the opening 16 lines as fluff, pushed for specifics on how his ex failed and criticized a lack of supporting evidence for the ‘I never cheated’ claim.

But, hey, at least she’s putting her Jeep on the line.

[…] whether you believe me or not. You have made me into a better person. I have begun to realize that it is not just all about me, and now have to be humble and give to others. You listened to every non-important little detail I had to say. I pushed you to your limits and you gave your all to me. I lost it all. All of who I was, more importantly who we were seems like you’re a stranger at this point. Heck, all the promises we had and broke them. I refused to stop texting you in the hopes that you would unblock me. I can’t change anything that you heard, whether you believe what people have said or not. After we broke up I felt like everything was fine. Up until I was by myself and would break into tears understanding how I truly did mess up everything we had. I was the cause of our downfall. That not being together wasn’t all it was cracked up to be nor what I was expecting.  trying to move on it was the hardest thing to do. It still is. The thought of you has made me loose (sic) my sanity. My mind wonders thinking if you think of me. wondering if you think about what we were. I never thought I’d be wishing I was with you Do you remember the playlist you asked me to be your girlfriend with? I continue to listen to it I just drown myself in tears. Almost a year ago we had just begun this adventure. We were there and crazy for each other. A few weeks later I knew I was in love, the feelings and emotions of a perfect bond and relationship were there. I thought you were the one. As the months went on I let my love deteriorate through time. If you have decided to keep reading this […]

Now we’ve finally gotten to the part where rumors of cheating are hinted at, but there is no further elaboration.

At least she still has a playlist.

[…] I’ve had to say you would realize this isn’t a joke or a game. This is how I feel. I have no reason to [illegible], lie or hold anything back from you. I have no part of you so I can’t loose (sic) anything else from here. From the first time we locked eyes I knew you were too good to let go. yet I did. I can’t go back to where we were, and I’m not asking you to. You have a bright future ahead of you and that’s what you always push me to do, my best. You will soon find another love and I truly wish you the best. Find someone who will give their best of who they are the whole time. Don’t let her make all of these mistakes I’ve made. Part of you will remain in my heart. I just hope to God you have thought about me like I have you. I think about where we would be today  if we were together and how much we were in love with each other. Knowing I don’t have you will be one of the things I’ve gone through. by this point you are probably getting tired of reading this (You don’t say? — emphasis ours) and probably regret me as a whole and wish you didn’t just spend more of your time wasted on me or this. But there isn’t a spot in me that regrets  what we were  expect the fact of how I destroyed us. I’m sorry. I wish you the best in all you do. I know you will do great with coaching this year. You have a bright future ahead of you. I couldn’t be more proud of the man you have become. I can’t thank you enough for all you have done for me both physically and emotionally. After it is all said and done I’ve done so much thinking and growing as a person. It’s all because of you. I’ve learned from my mistakes. The sad thing is I lost […]

In reply to “I just hope to God you have thought about me,” he wrote “I have not.” Brutal.

[..] you because of them. If you ever find yourself thinking about me, know I’m thinking of you. I love you.

Long intro, short conclusion, strong hypothesis but nothing to back it up. Details are important. If you want to be believed back it up with proof. You claimed that cheating never occurred but place blame on yourself, then, for what? Need to stop contradicting your own story and pick a side. While this gesture is appreciated, I would prefer details over statements. Revision for half credit will be accepted.

The paper grading session has been liked on Twitter more than 300,000 times.

RELATED: A mistress got a cheating husband killed by doing the dumbest thing possible to drive his wife crazy

Things could be looking up for Mr. Lutz.

.@NickLutz12 I think you're a little young for me, but this makes me want to date — not cheat on — you.

age is just a number

let's call it a date 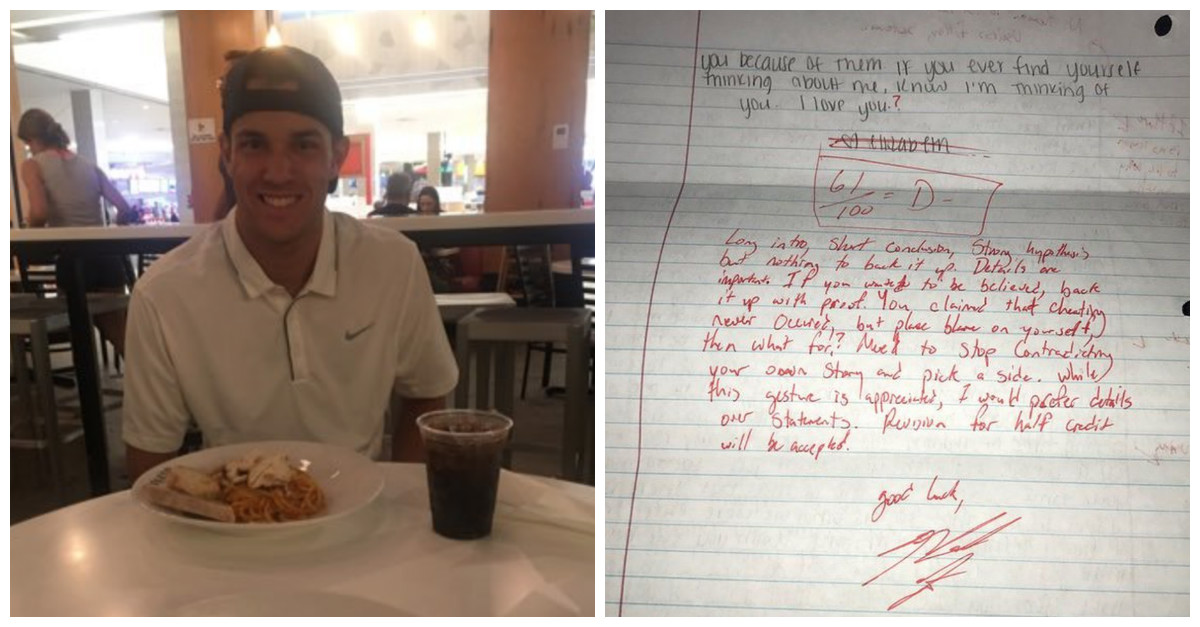