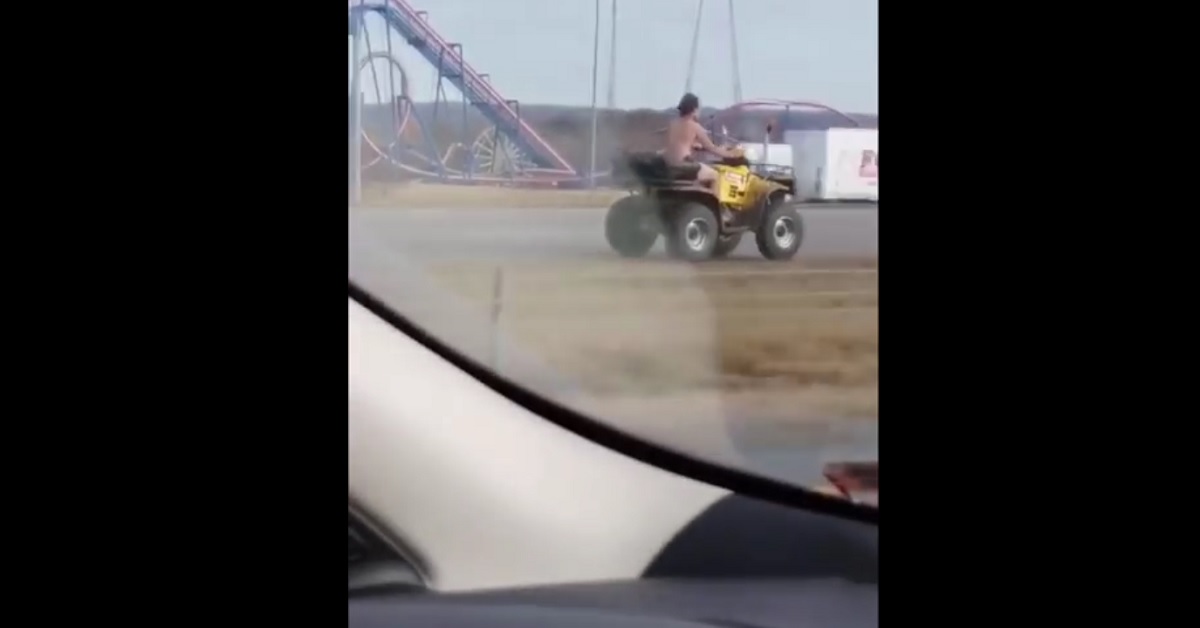 What did you do this weekend?

A naked man — named by police as Johnathon A. Menth, 20 — allegedly led police on a high-speed chase in the Kansas City area for over an hour on Sunday afternoon that quickly took a turn for the strange as he traded his clothes for the feeling of the wind in his hair, and his car for a stolen banana-yellow ATV.

It’s not clear at this time when Menth allegedly lost all of his clothes.

RELATED: A gym teacher decided to give his lesson in the nude, and it only got weirder from there

Menth started on local roads before taking his ATV to Interstate 435. Officers responded to reports of a “suspicious party… a naked male,” according to the Kansas City Star, and the chase went from there. True to the vehicle he chose, the chase covered all terrain: local roads, medians, shoulders, and eventually the wrong way on Interstate 435. All naked.

The police activity you’ve been seeing along 152 Hwy, I-435 and now 210 Hwy is all because of a naked man riding a yellow ATV who refused to stop for police. 🚓 He’s now in custody. No dangerous instruments were found. pic.twitter.com/hH6cL5yiF2

The Clay County Sheriff couldn’t resist joking about the incident either.

Great weather we are having…

Police caught up to him once he exited the Interstate, ending the chase around 3:45 p.m. local time. Menth allegedly tried to steer his ATV onto a set of railroad tracks, striking trackside equipment that caused him to be thrown from the vehicle, per KCTV5.

Menth has been charged with second-degree burglary, tampering with a motor vehicle, property damage and first-degree sexual misconduct.

Despite all the wrong-way driving, only Menth was injured in the chase. Police have not shared results of toxicology reports at this time, but drug use is suspected.

A video shared with the Star by Jess Fishell shows the man overtaking their car. Fishell and a friend were running late to a family dinner, on their way from a shooting range, when they saw the spectacle.

“This dude is butt-a** naked,” said a witness in the video provided by Fishell. “We were trying to figure out what’s going, and then a naked guy comes on the highway.”

Fishell says Menth was remarkably calm for everything that was going on, all things considered. “I couldn’t be that calm in public naked… I’d be freaking out.”