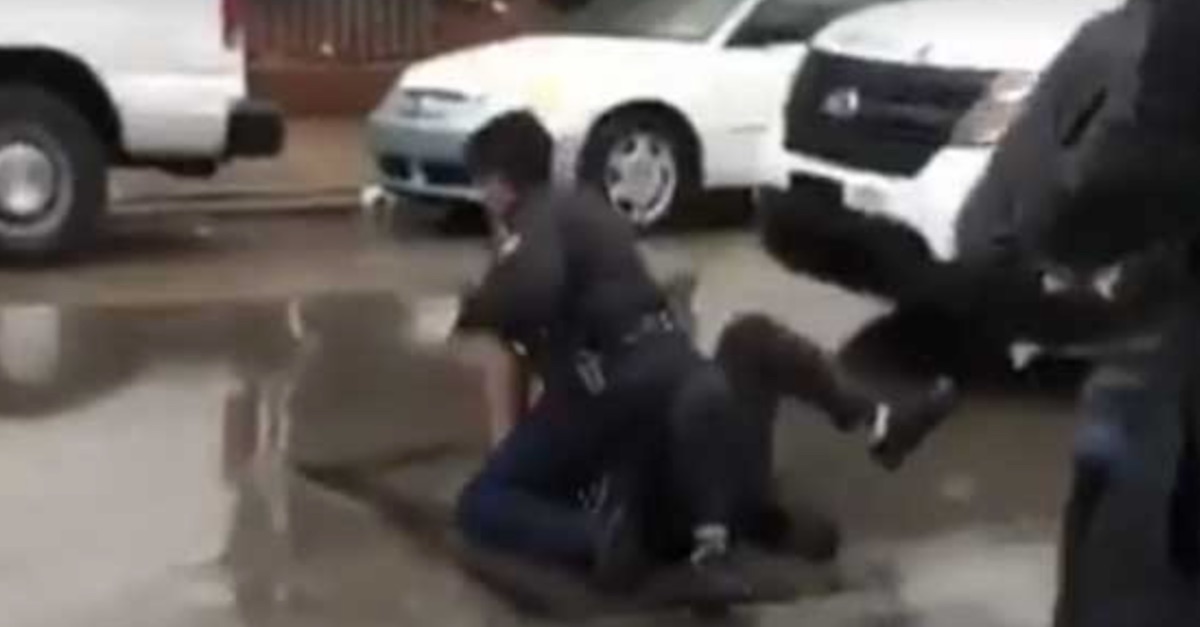 Philadelphia Police are investigating video of a police officer who, while breaking up a fight involving more than 30 people, repeatedly punched a teen on the ground.

RELATED: If you booze it up at Chuck E. Cheese?s and get violent with police, this will happen every single time

As a result of the investigation, the unnamed officer has already been removed from street duty.

According to Philly.com, police responded Monday afternoon to a report of a person with a weapon and arrived to find dozens brawling.

One female officer, who has not yet been identified, was filmed in the middle of it all.

If we do something wrong we are all over the news. What makes this cop so different? No matter the circumstances this was unnecessary. #nbc10 #abc6 #cbs3 #fox29 @fox29philly @nbcphiladelphia @nbc10morningteam @6abcactionnews @cbs_philly @philadelphiapolice215 @philadelphiapolice #policebrutality

At first glance, this appears to be a clear cut case of police brutality.

The police statement on the incident, though, says there is some important context not seen in the video:

The 16-year-old teen, police say, admitted to hitting the officer in the face.

Police Commissioner Richard Ross described both teen’s and the officer’s version of events as “virtually identical.”

?I?m not trying to justify anything. I?m just merely saying that police work sometimes isn?t as pretty as people want it to be,” he said. ?And in this case, rarely do you get incidents where the police officer and the person taken into custody tell an identical story, but in this case they did.?

RELATED: Watch a man step on the gas and end a 3 a.m. bar brawl with a bang

The teen has been charged with assault on a police officer and disorderly conduct.