A U.S. Marine plane has gone down in Australia and three are still missing — the early signs are not good 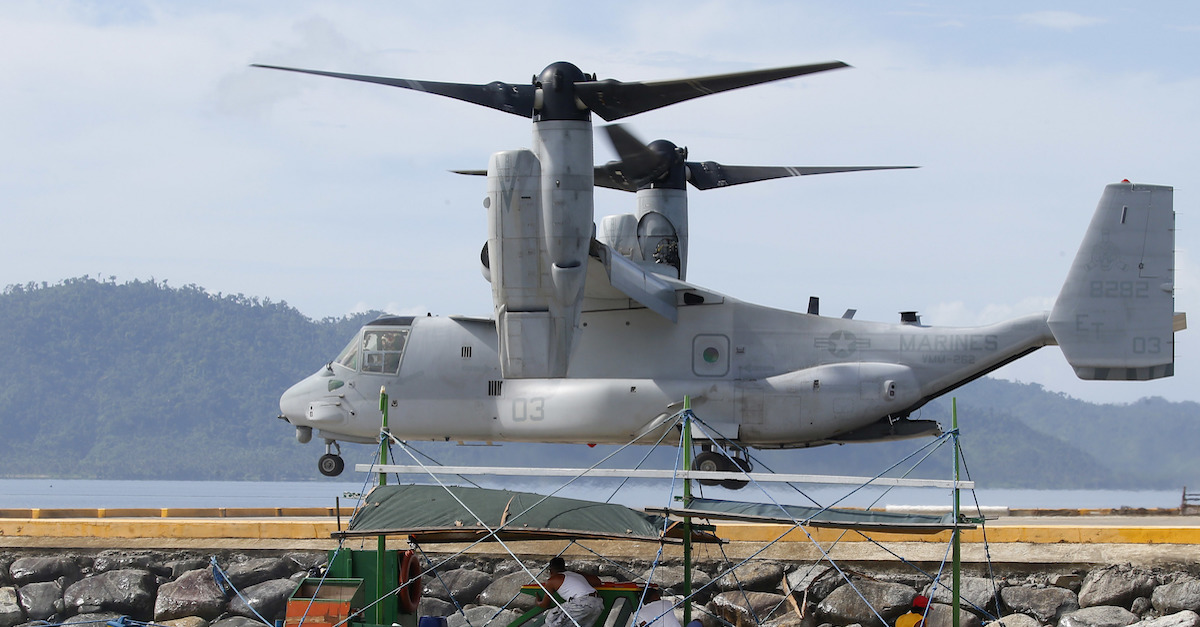 AP/Bullit Marquez
A US Marine Osprey transport aircraft, carrying US troops with relief supplies, lands on a pier to simulate humantitarian assistance to test their readiness in disaster relief efforts at the ongoing joint US-Philippines military exercise at Casiguran township, Aurora province in northeastern Philippines Monday, May 15, 2017. This year's exercise dubbed "Balikatan 2017" or "Shoulder-to-Shoulder" involved air, land and sea assets of US and Philippine militaries to include Ospreys, BlackHawk choppers, Amphibious vehicles and ships but without weapons.(AP Photo/Bullit Marquez)

The U.S. Marine Corps (USMC) has confirmed that it is actively searching for three service members who went missing after an MV-22 Osprey carrying more than 20 went down in Australia.

RELATED: The longest active Marine on duty just ended his career with a celebration fit for an American hero

It’s been termed a “mishap.” While 23 of the 26 personnel on board were rescued, three are still missing.

“The aircraft involved in the mishap had launched from the USS Bonhomme Richard (LHD 6) and was conducting regularly scheduled operations when the aircraft entered the water,” the USMC said in a statement.

These planes had been used during joint exercises between the U.S. and Australian military.

?I can confirm no Australian Defence Force personnel were on board the aircraft,? Payne said in a statement. ?The United States are leading the search and recovery effort.?

RELATED: All 16 service members who lost their lives in the military plane crash have been identified

Payne said she had spoken with U.S. Defense Secretary Jim Mattis ?to offer Australia?s support in any way that can be of assistance.?

The dire situation comes less than a month after 15 Marines and one Navy corpsman were killed in a plane crash and two months after seven sailors on the USS Fitzgerald drowned at sea in a collision with a container ship.