A “United We Stand” rally has been planned in NYC for Colin Kaepernick, who is still without a job 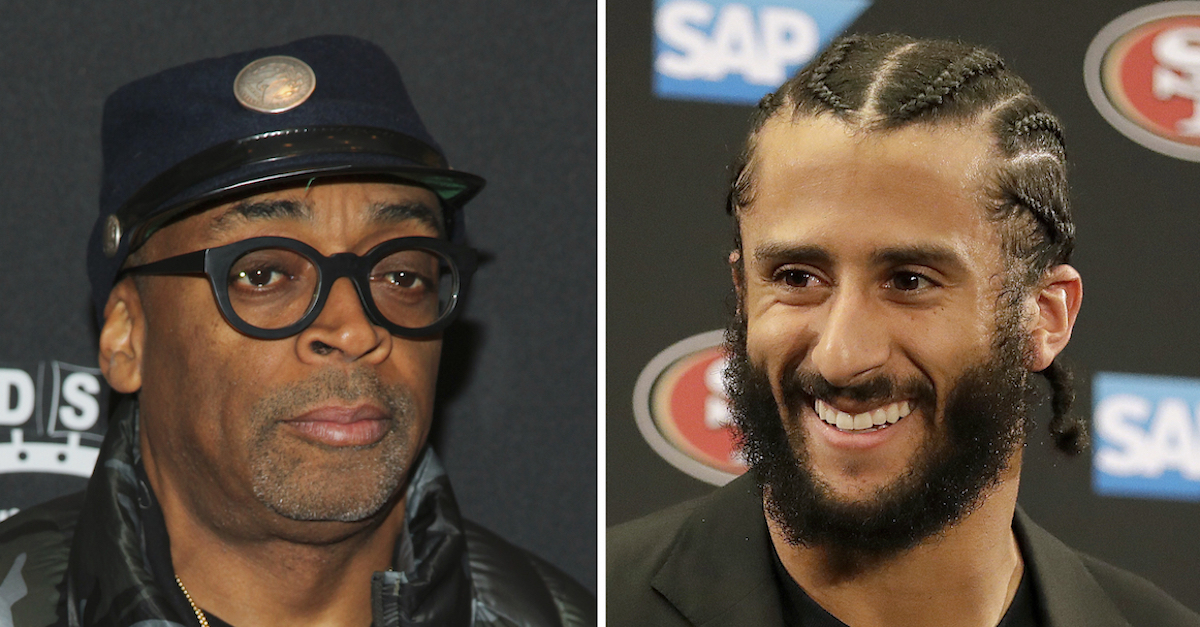 AP Photo/Files
FILE - In this combination photo, director Spike Lee, left, appears at the premiere of "Touched With Fire" on Feb. 10, 2016, in New York and San Francisco 49ers quarterback Colin Kaepernick appears at a news conference on Jan. 1, 2017, after an NFL football game against the Seattle Seahawks in Santa Clara, Calif. Lee says it's "fishy" that Kaepernick has remained an NFL free agent. On an Instagram post, Sunday, March 19, 2017, Lee questioned what crime Kaepernick has committed. He says the quarterback's lack of suitors "smells mad fishy to me." Kaepernick's season-long protest of the "Star Spangled Banner" ahead of 49ers games became a topic of national debate last season. (AP Photo/Files)

The Colin Kaepernick story hasn’t gone away, as the former San Francisco 49ers quarterback, now a free agent, still finds himself jobless at the NFL level after kneeling during the National Anthem last season.

RELATED: Colin Kaepernick, soon to be job hunting, has plans to end his protest during the national anthem heading forward

The opinion on sports talk radio and elsewhere about Kaepernick’s protest is and always has been marked by division.

While some believe that kneeling during the National Anthem was offensive to military families, as well as inappropriate for the workplace and not genuine, others believe Kaepernick is being unfairly shut out of the NFL, pointing out that players who have been violent off the field have gotten second chances, and that he is more qualified to play the quarterback position than others who have gotten jobs this offseason.

Others, even more cynically, believe NFL owners have colluded and agreed not to sign Kaepernick behind closed doors.

The conversation boiled over this week when retired quarterback Jay Cutler came out of retirement to play for the Miami Dolphins, and Kaepernick didn’t get a serious look, even as the Baltimore Ravens are still awkwardly testing the waters of public opinion in advance of a final decision about bringing the 29-year-old QB aboard.

In light of all of this debate, filmmaker Spike Lee tweeted Tuesday morning that there will be a rally for Kaepernick in New York City called “United We Stand,” on Aug. 23.

The naming of the event and the photo choice for it suggests that those supporting it are united in kneeling as a stand.

I Did Not Organize And Set Up This Protest. However I Still Support My Brother And His Stance On The Injustices In The USA

Lee explained that he did not organize the protest, but supports Kaepernick “and his stance on the injustices in the USA.”

RELATED: President Trump issues a not so subtle warning to NFL owners about Colin Kaepernick

The response to Lee’s tweet, as expected, has been mixed.

Some hoped that police, who will be at the rally for security, will be thanked.

Hope everyone thanks the police who will be protecting you to have a rally for Kaepernick.

Others said it was about time someone defended Kaepernick from the NFL.

Finally someone wants to take a stand against what the @NFL is doing to @Kaepernick7
✊✊✊✊✊✊✊✊✊✊✊✊✊✊ pic.twitter.com/zhOEp1oImf

Still others said “No thanks” and that bad stats are largely to blame for Kaepernick remaining unsigned.