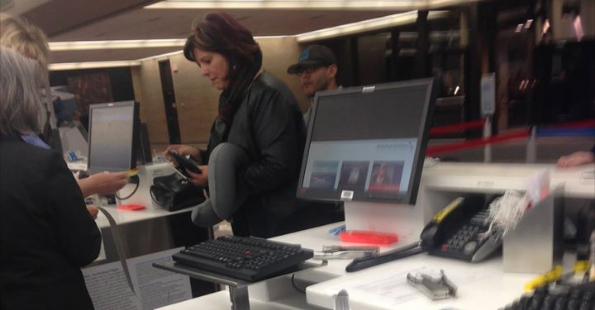 Heartbreak turned into the heartwarming story of the year after a father who thought his 2-year-old daughter could fly for free was told at the ticket counter that she could not. The father was said to be shocked and confused because he would not be able to pay for the ticket.

Then, a stranger purchased a $749 ticket so the man’s little girl could board the flight. The story went viral thanks to a Facebook post that was shared by Kevin Leslie on the page “Love What Matters.”

Leslie wrote that after the father got the bad news, he stepped aside and started making some calls.

RELATED: Ellen DeGeners brought a group of students to tears with this act of kindness

“Hugging his daughter and grabbing his head, you could tell he was heartbroken,” Leslie wrote on the page.

The woman standing next to the man and his daughter, identified by Leslie as Debbie Bolton, overheard the entire situation. After speaking with the father, she went to the counter and asked to purchase a ticket for the man’s daughter.

Despite the agent at the counter asking the woman if she realized how much the ticket would cost, Bolton said it didn’t matter. According to the post, she said to the father over and over, “Don’t worry about it.”

“She knew she wanted to help that man and his daughter no matter what the cost,” the post said.

Bolton is the co-founder and global chief sales officer at Norwex, and was returning from a business trip in Omaha, Neb., when the interaction took place.

A woman who works with her, Suzanne Holt, told DailyMail.com,:

“I’m the Senior Vice President Sales Leader within her company and admire her greatly. She’s an amazing woman and never would have intended  for this to be public.

My first thought was that I’m sure she did this privately and would not want it to be known so I didn’t plan to share it with anyone. With the way news goes viral on Facebook, I saw it spread like wildfire through my news feed as she was recognized.

This is an amazing story because it’s about a woman who is amazing at her very core.

I love, admire and respect her for who she IS, not just for the business she’s built. She lives her life like this.

She’s someone who does good in private just because it’s the right thing to do. She’s not doing it to bring fame to herself, but just to show love.

When showing it to my son, he immediately said, ‘That sounds like something Debbie would do.'”