In the hours of Thursday, Dec. 14, a brown and white bovine belonging to Old First Reformed United Church of Christ in the Old City area of Philadelphia, PA, escaped from a Nativity scene and made a run for it on down the freeway. Needless to say, chaos ensued.

The bold bovine — whose name is Stormy — initially escaped her festive prison at around 2 a.m. Police eventually caught up to her, and were able to coral her back to the relative safety of a fake stable in which a pretend baby Jesus was born.

'STORMY' THE COW CORRALLED: @PhillyPolice corralled a cow that got loose on I-95 in Northern Liberties after leaving a nativity scene at a local church https://t.co/02LSP484N2 pic.twitter.com/46EKSieZ67

But the holiday madness didn’t stop there!

Stormy clearly wasn’t satisfied with her minuscule taste of freedom, so she decided to bust out of the Nativity scene for a second time. This time, Stormy made her way to a nearby parking structure. Police were, once again, able to wrangle her and escort back “home” — let’s hope she wasn’t charged for her brief stay in the parking lot.

“There was a Pennsylvania state trooper with us who owns a horse/cattle ranch in South Jersey,” Philadelphia Police Sgt. Tim Devlin told NBC 10. “He was the one we took the lead from. He’s the expert on the topic, he knew how to corral the animal.”

During the chase, Katherine Scott, a reporter with Channel 6 Action News tweeted: “Storming the cow is now on an upper floor of a parking garage at 4th and Arch after her second escape from a live nativity scene within hours.” (At the time, Scott believed the cow’s name was Storming. She later corrected her mistake.)

RELATED: A bear literally walked into a candy shop, and that’s not the start of a bad joke

As you can see from these videos, the whole thing was like something out of a Chevy Chase movie. It was one of those gloriously farcical events that only occurs once in a blue moon, and boy did the local police have some fun with it.

“If you’re in the area of 4th and Market, beware of traffic delays,” Philly Police wrote in a tweet. “A cow is loose. Again. No, we can’t believe we’re tweeting this either,” they added alongside a popular image of “Star Trek’s” Captain Picard with his head in his hand.

If you're in the area of 4th and Market, beware of traffic delays. A cow is loose. Again. No, we can't believe we're tweeting this either. pic.twitter.com/3FW6iHzQws

They later tweeted a different meme featuring a cow.

“You know, you start your day saying ‘well, being a cop is a tough job, but at least I won’t have to catch a cow today,'” they captioned the meme. “But, it wouldn’t you know it? You’re wrangling a bovine. Then you say, ‘Well, at least I’ll never have to do that again….,'” they continued. “Hold my beer,” said the mean-looking meme-cow.

You know, you start your day saying "well, being a cop is a tough job, but at least I won't have to catch a cow today." But, it wouldn't you know it? You're wrangling a bovine. Then you say, "Well, at least I'll never have to do that again…." pic.twitter.com/EY5K5FkgVd

“Stormy is a 7.5 yr old Hereford from Manatawna Farm in Roxborough. She’s around 1500 lbs and has been in 4H shows,” she tweeted.

The whole thing was udderly ridiculous. 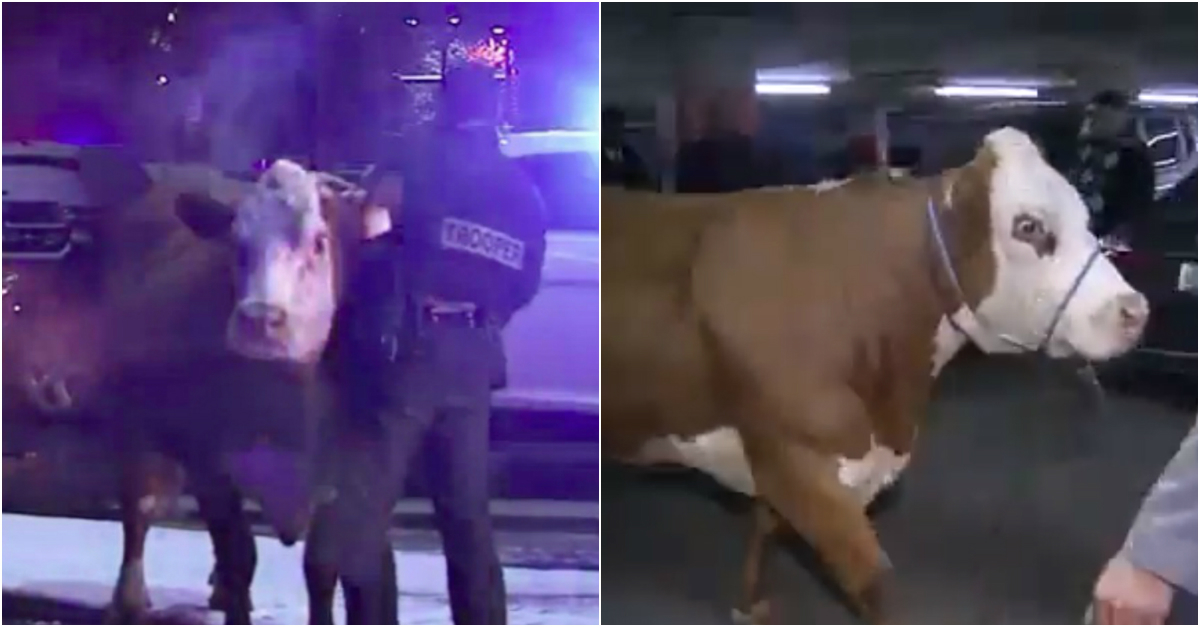