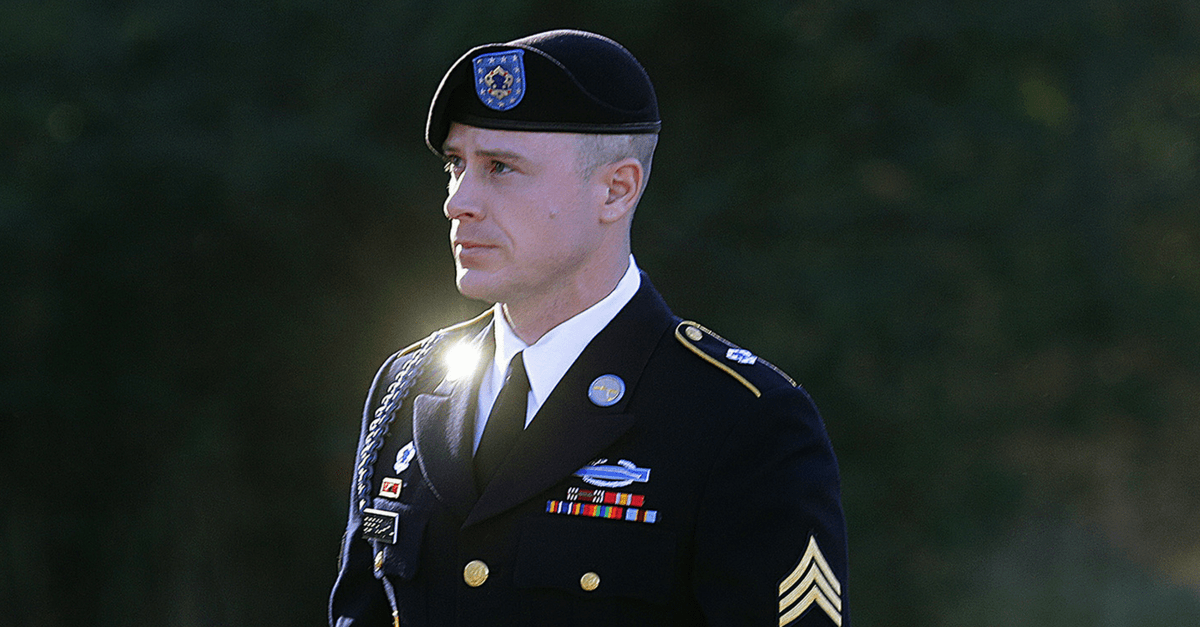 AP Photo/Ted Richardson, File
FILE - In this Jan. 12, 2016, file photo, Army Sgt. Bowe Bergdahl arrives for a pretrial hearing at Fort Bragg, N.C. The Army sought to have U.S. Sen. John McCain back away from statements about punishment for Bowe Bergdahl because of concerns about hurting the soldier's right to a fair trial, according to newly released emails. The emails were revealed in a motion filed Monday, Aug. 1, 2016, seeking the dismissal of charges against Bergdahl, who walked off his post in Afghanistan in 2009 and wound up in enemy captivity for five years. (AP Photo/Ted Richardson, File)

Shortly after it was announced that Army Sergeant Bowe Bergdahl would avoid prison for deserting his unit, President Donald Trump chimed in. Bergdahl was a frequent target of Trump during his presidential campaign.

The decision on Sergeant Bergdahl is a complete and total disgrace to our Country and to our Military.

“The decision on Sergeant Bergdahl is a complete and total disgrace to our Country and to our Military,” Trump wrote on Friday.

According to the Associated Press, Trump sent his Friday tweet from aboard Air Force One as the president traveled to Hawaii and parts of Asia.

As a candidate for President of the United States, Trump was known to use Bergdahl’s 2009 desertion as fodder for cheers at his rallies.

“We’re tired of Sgt. Bergdahl, who’s a traitor, a no-good traitor, who should have been executed,” Trump said in Las Vegas in 2015.

“Thirty years ago,” Trump remarked, “he would have been shot.”

At his sentencing on Friday, Bergdahl was noticeably trembling as he discovered how he would pay for his crime of desertion.

The 31 year old was demoted to private, given a dishonorable discharge, demotion to private and was informed that he would have $10,000 deducted from his salary for the next ten months.

After sentencing, Bergdahl’s lawyer, Eugene Fidell, noted how much he had looked forward to the day.

“Sgt. Bergdahl has looked forward to today for a long time,”, Fidell told reporters. “As everyone knows, he was a captive of the Taliban for nearly five years, and three more years have elapsed while the legal process unfolded. He has lost nearly a decade of his life.”

Earlier in the month, Bergdahl made headlines when The Sunday Times of London published an unreleased interview with him where he claimed he had been treated better as a prisoner of war by Taliban fighters, than by the United States Army.

“At least the Taliban were honest enough to say, ‘I’m the guy who’s gonna cut your throat.’ Here, it could be the guy I pass in the corridor who’s going to sign the paper that sends me away,” Bergdahl said.

He added that, “You might as well go back to kangaroo courts and lynch mobs.”

Bergdahl alluded to President Trump’s earlier statements and expressed fear he would not get a fair trial.

“The people who are to the point of saying, ‘Yeah, just shoot him,’ you can never convince those people to change their minds,” Bergdahl said.

Shortly after his Friday sentencing, and Trump’s comments, Bergdahl became the top trending topic on Twitter.