A “Queer Dance Party for Climate Justice” marched on Ivanka Trump’s home, but there was one problem with their protest 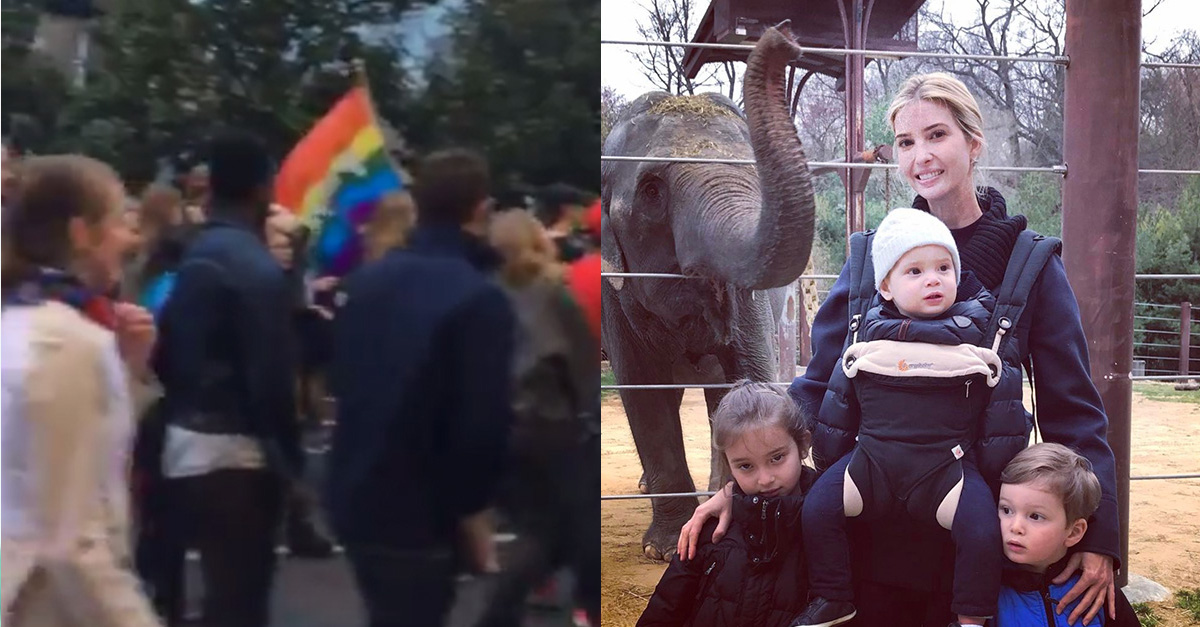 The Trump administration has drawn the ire of many group many activist groups, and their angst was on full display Saturday.

Protesters gathered outside Ivanka Trump and Jared Kushner’s family home in the Kalorama neighborhood of Washington, D.C., to have a “Queer Dance Party for Climate Justice.” People were dressed in festive and wacky attire and dancing on cars, making noise and causing a ruckus.

I got some pretty good footage I'll be filing a story on soon! pic.twitter.com/Igs5IL9zSe

The logistics of the Gay Dance Party in front of Ivanka's house. pic.twitter.com/xobAtv5oKE

They were yelling "fuck Trump" through "We Will Rock You." pic.twitter.com/PB98AfzNj5

The crowd of over a hundred was hoping to send a message to the daughter of the president. However, there was one problem with their effort: She appears to be in New York for the weekend, celebrating her youngest son’s first birthday.

“Theodore caught contemplating if he’ll be able to eat his body weight in birthday cake. (Postscript: he came insanely close,” she wrote on Instagram Saturday.

Unsurprisingly, the neighbors were not pleased with the mayhem. One elderly man came out of his home and yelled at a man he presumed was a protester.

RELATED: Attacks on the first lady continue with a petition demanding she move to the White House or foot her own security bill

“Video shows the man saying he’s an 82-year-old man who lives in the neighborhood before telling one person in attendance to ‘get the fuck out of here,'” the Washington Examiner writes.

The neighbors around Ivanka Trump's house are upset. One of them started yelling at my friend who was just recording with me to leave. pic.twitter.com/w6s9yL6qfj

Rare wrote earlier this week that a meeting was held to discuss the new inconveniences that have emerged with them moving to the neighborhood.

Ivanka Trump recently transitioned into a more official role at the White House, though she will not receive a federal salary. The job title has been described as “assistant to the president.”

Despite the chaos in her neighborhood, her family seems to be adjusting to Washington life nicely. Last week they took a trip to the National Zoo, and shared a great picture with an elephant on Instagram.

Making some new friends in DC! 🐘