Washington woman Cynthia Wakelin wasn’t home last week when a UPS driver showed up to deliver a package. On his way out, he, apparently, ran over her 14-year-old dog and wrote a short note to her on a “missed package” slip.

“Sorry, but I backed over Tobey [sic]. He’s dead over by where I turn around,” the note read. “I didn’t see him behind me. Sorry.”

Not only is Wakelin, who lives in a remote location just so that her two dogs could roam freely, heartbroken by the loss of her dear pet, but she’s also bewildered by the driver’s short, heartless note.

RELATED: After months of anticipation, April the giraffe has finally welcomed her eagerly-awaited calf into the world

“All I saw on the note was ‘Tobey’ and ‘he’s dead,’ and I just started screaming,” she said in an interview. “I told my girlfriend to get my kids in the house. My son was asking what was wrong, and I said I needed to find Toby. I guess I didn’t believe it was true.”

She claims she had to search hard for the Sharpei-terrier mix’s body, which was hidden in a wooded area under a log. She added that the driver was familiar with her pet, as he would deliver packages frequently, and he could have called the number on Toby’s collar.

“If he would have called me, it would have lightened the blow a little bit,” she said. “I don’t ever want to see his face again.”

However, things got worse when she tried to report the incident to UPS’s customer service, when a representative told her, “At least he had the heart to leave a note and didn’t just leave your dog dead on your driveway.” But luckily, another more sympathetic representative was sent out to her house to apologize in person. He even intercepted the driver, who was attempting to redeliver the package, and admonished him. However, Wakelin hasn’t heard from the company since, so she took to Instagram to share the horrifying news:

PLEASE SHARE! A @ups driver killed my 14 y/o dog, Toby, and left this note on my door!” she wrote as the caption. “He also put his body where I had to search for him. My phone number was on the package and on my babies collar. You took my baby! You couldn’t even call and tell me or give a sincere apology? You thought you could redeliver my package the next day and apologize? We weren’t worth your time that day? I had to come home WITH MY KIDS and find a note! Do you know how traumatizing that is for a 6 year old boy?! I’m sick. My whole family is sick. This is not acceptable! I live far off the main roads. You failed to pay attention and have no heart! You ripped my family into pieces. I didn’t get to say goodbye to the first dog I have ever owned. He was my family. He was my child’s best friend.

“UPS apologized to the customer for this unfortunate incident. Our local manager personally visited the customer and gave our condolences. The driver involved has been disciplined, and the company will make a goodwill payment to the customer,” spokesman Dan Mackin said in the statement.

As for Wakelin, she’s been speaking with animal rights lawyers to explore her legal options because she wants “UPS to make it a point to tell their drivers that they need to care about the people they are delivering these packages to. And if their pets get hurt – even if they don’t care – they should act like they care.”

RELATED: Tragedy struck a North Carolina family on vacation in Atlanta when their son got stuck in a rotating restaurant 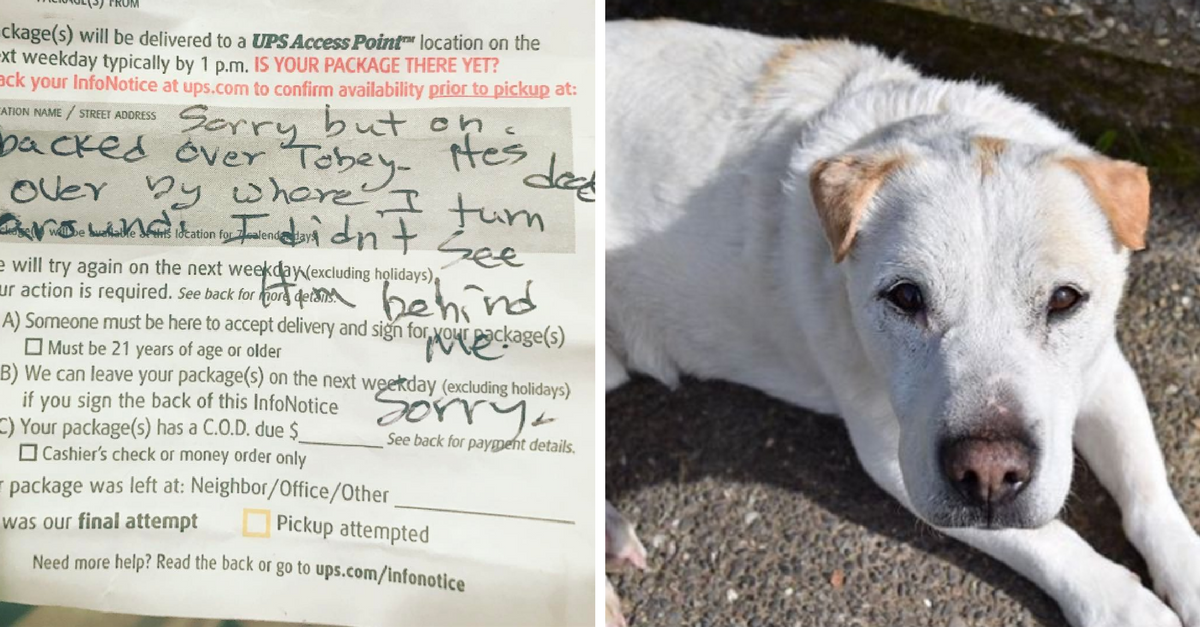