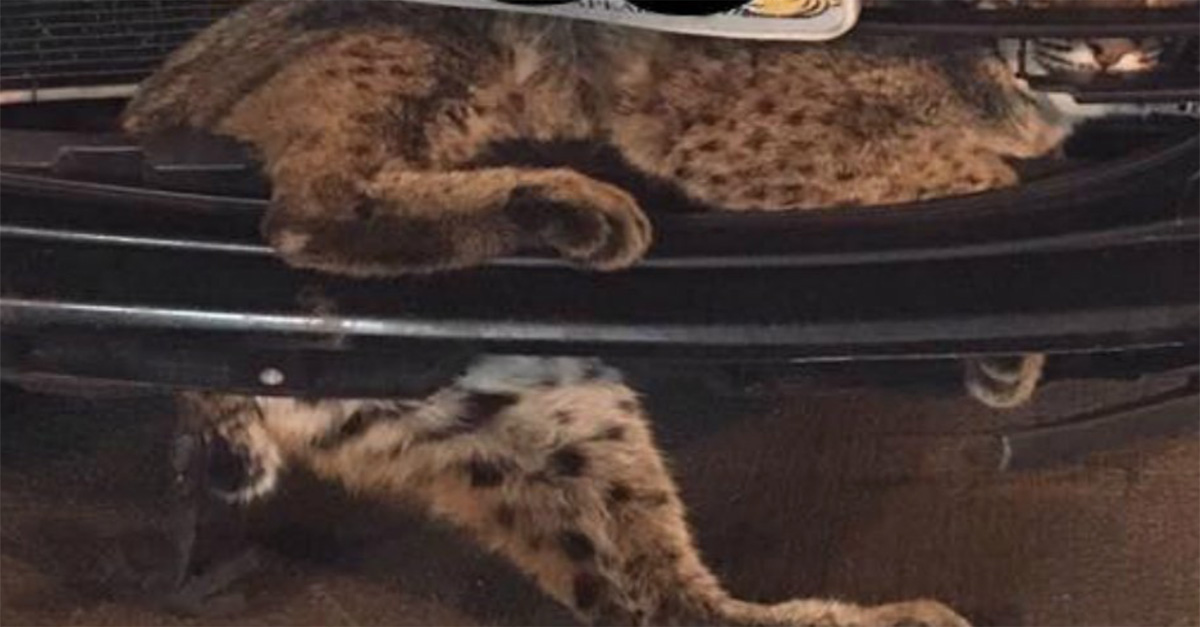 Animal control was shocked when they found a bobcat in a woman’s car grill on Thanksgiving morning.

Christie Peters was baking chocolate pie for Thanksgiving dinner — her husband’s favorite — when she received the call about the big cat.

The director of the Richmond Animal Care and Control (RACC) got a text from her colleague, RACC Officer Barbara Jones, asking what to do, reported WTVR.

RELATED: A man who took on a rabid bobcat with his bare hands in viral video has some advice for all of us

“We’ve never done anything like this,” Peters explained. “I didn’t want to make anybody else get out of bed on Thanksgiving morning, so I went with my dad.”

According to Peters, when she and her father responded to the scene, the driver told her that she had hit something while driving, but it wasn’t until she parked in Richmond an hour later that she found the bobcat lodged in the grill of her Prius — 50 miles away.

“When we walked by, he hissed at us, so he’s alive and may be OK, which was so crazy since she drove from Gloucester to VCU,” said Peters.

They worked to sedate him, before freeing him from the makeshift cage.

“And really, in reality, the only thing holding him up was a wire… to his underbelly and one plastic piece under his ribcage,” she explained to WTVR.

Officers Peter and Jones made sure to take precautions when carrying the bobcat, including using a catch pole around its neck. Miraculously, the bobcat came away with only a minor cut on his back.

“I’ve only ever seen one once in real life like running across a road somewhere,” Peters said. “We just don’t ever get a chance to be so close to such beautiful, wild creatures and it was just wonderful to know that he made it through such a weird, crazy situation.”

According to officials, the bobcat will be eventually released into the wilds where he was hit.

“Animal Control is so funny, you never know what you’re going to walk into,” Peters shared. “It’s perfect that it was Thanksgiving … because it was just a miracle and we’re so grateful that it ended the way that it did.”

A similar situation occurred in September when a Canadian woman hit a coyote while driving, Fox 8 reported. The woman, Georgie Knox, believed the animal was dead and continued her 20 mile journey to Calgary. Only then did she realize the coyote had survived the trek.

“Upon stopping at a traffic light by my work, a construction woman notified me that there was in fact a coyote still embedded in my car,” she wrote. “When I got out to look, this poor little guy was looking up and blinking at me,” Knox wrote on a now-deleted Facebook post.

“Clearly mother nature has other plans for this special little guy!” Knox shared.