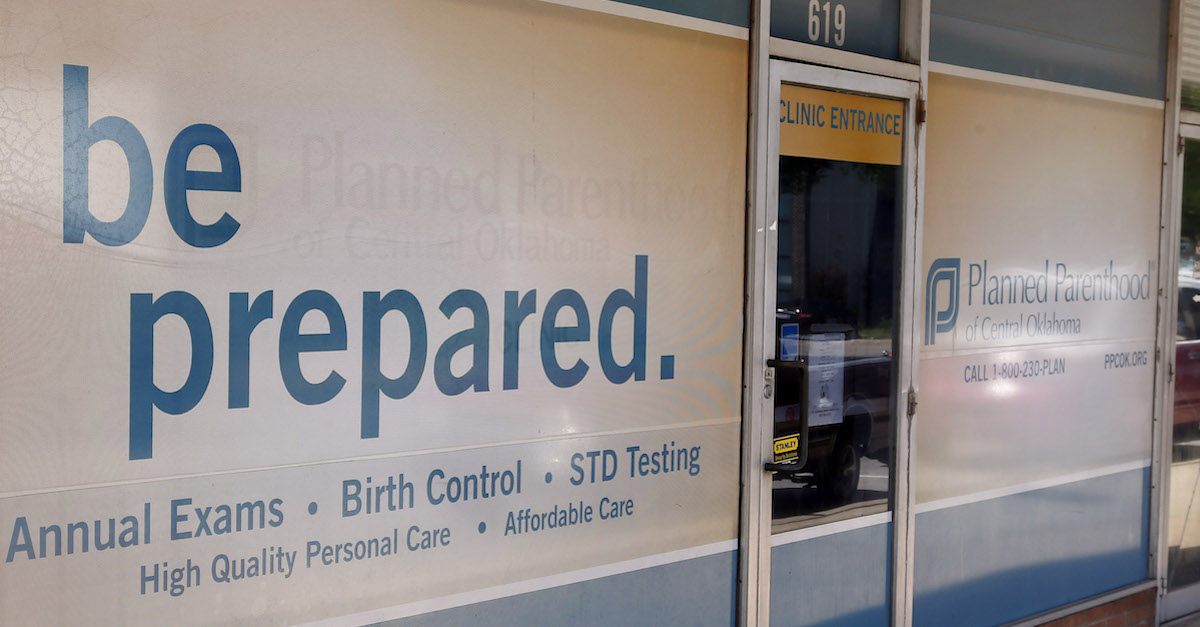 AP Photo/Sue Ogrocki
The entrance to a Planned Parenthood Clinic is pictured in Oklahoma City, Friday, July 24, 2015. U.S. Sen. James Lankford, R-Okla., a Baptist minister and fierce abortion opponent, has introduced a bill in the U.S. Senate that would end all federal funding for Planned Parenthood unless the organization stops performing abortions. Recently released videos that show a Planned Parenthood official discussing the distribution of fetal body parts are being used by anti-abortion advocates in Oklahoma to seek political contributions and bolster support for legislation to further restrict abortion. (AP Photo/Sue Ogrocki)

David Robert Daleiden and Sandra Susan Merritt, the activists behind undercover videos that targeted Planned Parenthood, had the tables turned on them as they were charged Tuesday with 15 felony counts of invasion of privacy, according to a criminal complaint filed in California.

The pair think of themselves as “citizen journalists” and investigators for the Center for Medical Progress, a nonprofit, anti-abortion group. In a statement Tuesday night, the center responded by promising to go on the offensive and release even more secret videos.

The statement continued: “The right to privacy is a cornerstone of California’s Constitution, and a right that is foundational in a free democratic society. We will not tolerate the criminal recording of confidential conversations.”

The last time @PPact colluded with political cronies to persecute citizen journalists, both charges AND corrupt DA thrown out! BRING IT ON!!

According to the complaint filed Tuesday in state Superior Court in San Francisco, Daleiden and Merritt posed as “Robert Sarkis” and “Susan Tennenbaum” of Biomax Procurement Services — a company they made up and registered with false documents, including fake driver’s licenses.

They first gained entry to a conference in 2014 of the National Abortion Federation in San Francisco, and managed to continue the ruse through September 2015. Once inside these events, they would secretly record speakers, vendors and attendees, according to the complaint.

RELATED: President Trump offers a deal to Planned Parenthood — with one big catch

The Center for Medical Progress website started posting heavily edited videos in July 2015, investigators said. Several people named and portrayed in the videos reported receiving death threats, according to the affidavit. Identities of the 14 targets of the videos are under seal.

Planned Parenthood Federation of America spokeswoman Mary Alice Carter on Tuesday said that the charges were “a clear message that you cannot target women and you cannot target health care providers without consequences.”

She continued: “Planned Parenthood has done nothing wrong, and the only people who broke the law are those behind the fraudulent tapes.”