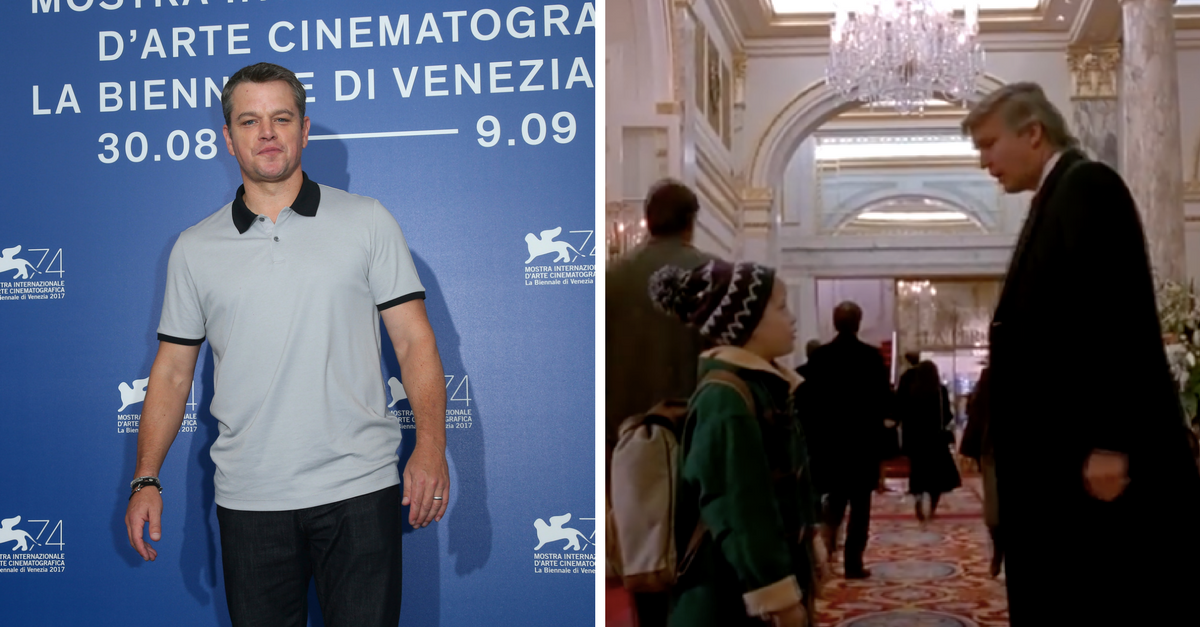 While speaking with The Hollywood Reporter about his new movie with George Clooney “Suburbicon,” actor Matt Damon revealed Donald Trump demanded to be written into “Home Alone 2” and several other movies in exchange for filming on his property.

“The deal was that if you wanted to shoot in one of his buildings, you had to write him in a part,” Damon explained. “[Director] Martin Brest had to write something in ‘Scent of a Woman’ ? and the whole crew was in on it. You have to waste an hour of your day with a bullshit shot: Donald Trump walks in and Al Pacino?s like, ?Hello, Mr. Trump!? ? you had to call him by name ? and then he exits.”

RELATED: Another Civil War reenactment has been cancelled thanks to ?recent events?

While most of Trump’s cameos were ultimately cut from films, one made it to the big screen: the famous scene from “Home Alone 2,” in which Kevin Mcallister bumps into Trump in the foyer of The Plaza, which he owned in the 1990s. In the well-known scene, McAllister asks the billionaire, “Where’s the lobby?” That’s when Trump, then age 45, delivers his line, “Down the hall and to the left.”

“You waste a little time so that you can get the permit, and then you can cut the scene out,” Damon said. “But I guess in ‘Home Alone 2’ they left it in.”

Damon spilled the beans about the president’s former demands while discussing how race plays a role in his new film and how movies that address race relations are necessary after the recent violence in Charlottesville. The actor called President Trump’s “many sides” comment in the wake of the tragedy “absolutely abhorrent” and noted, “Sadly, I feel the movie was made at the right time.”

RELATED: A man who said he was stabbed for his ?neo-Nazi haircut? now faces charges of lying to police