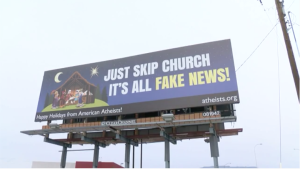 Despite President Trump’s declaration of victory back in October, the “War on Christmas” is apparently still raging in one New Mexico community after a group of atheists put up a billboard with what many are calling an offensive message ahead of the holidays.

The billboard features a nativity scene off to one sign with the words, “Just skip church. It’s all fake news!” At the bottom, a cheery message reads, “Happy holidays from America’s Atheists.”

While locals may consider the display “a slap in the face of people of faith,” Nick Fish, national program director for American Atheists, says that wasn’t his organization’s intention, bringing up the fact that many people are “rightly skeptical” of the news they come across on social media or hear from friends.

Fake news has been a topic of conversation for two years now, and the best way to fight against fake news is to think critically and look at the evidence. We want people to do that in all aspects of their lives and not shut off that part of their brain that does critical thinking for two hours when they attend their houses of worship each week.

He also indicated that the organization was simply trying to find a way to acknowledge non-Christians during the holiday season.

“Christianity or any other religion doesn’t have a monopoly on December,” he said. “So, our message here is, however, you want to celebrate it go ahead and do that.”

“They’re not promoting conversation; they’re just saying Christianity is false, the Nativity is a farce, the church and everything we stand for is fake, the Bible is a lie, and we are all liars,” Rev. Richard Mansfield, senior pastor of the New Beginning Church, said, adding that the billboard is “mocking everything that Christians around the world believe in, and they’re saying, ‘Skip church because it delivers fake news.'”

“They are attacking the church,” he said.

RELATED: City threatens to pull the plug on a man’s three-decade tradition of spreading Christmas joy

“I think it’s terrible, because Christmas is almost here for one thing, and that’s not the way I wish to celebrate the holidays,” Connie Lindsay additionally told KRQE.

The sign comes two months after President Trump promised that we’d be hearing the phrase “Merry Christmas” a lot more this year.

“We’re getting near that beautiful Christmas season that people don’t talk about anymore. They don’t use the word Christmas because it’s not politically correct,” he argued at the time. “You go to department stores, and they’ll say ‘Happy New Year,’ or they’ll say other things, and it’ll be red, they’ll have it painted. But they don’t say — well guess what? We’re saying merry Christmas again.”