Wyatt Gillette, a sick 8-year-old boy, passed away this weekend, one day after becoming just the 96th civilian to receive one of the highest Marine Corps honors.

According to the Marine Corps Times, Gillette was made an honorary Marine in a ceremony at Camp Pendleton in California.

“Marine Corps Commandant Gen. Robert Neller approved Gillette as an Honorary Marine just days after a petition was posted online asking him to bestow the honor on the young boy, who was born on Aug. 15, 2008, and diagnosed four years later with Aicardi-Goutieres Syndrome Type 1 (Trex 1 Mutation), a rare genetic disorder,” the Marine Corps times reported this weekend.

One of the easiest decisions yet as CMC was to make this 8-yr old a Marine. Keep fighting, Wyatt! You are a Marine! pic.twitter.com/bSDrEHcc3c

Gillette’s family detailed the boy’s struggles in a crowdfunding post asking for assistance in his medical care.

“As most of you know Wyatt Gillette was born August 15 2008 to SSGT Jeremiah Gillette & Felishia Gillette. He was born with a rare genetic syndrome called Aicardi-Goutieres Syndrome (Trex1); with this syndrome its amazing Wyatt has made it this far,” the family wrote.

“The syndrome causes many other conditions which have to be treated such as: diabetes, seizures, g-tube feeds, body temp regulations, cerebral palsy, and many more.  Even with all these obstacles, Wyatt has made it through all of this by the love and support he has in his life, so thank you to everyone who has been there!”

“One of the easiest decisions yet as CMC was to make this 8-yr old a Marine. Keep fighting, Wyatt! You are a Marine!” Neller wrote on Twitter.

Earlier in the week, Gen. Neller told the Marine Corps Times that the young boy was the epitome of Semper Fidelis.

“The courageous fight that Wyatt continues is absolutely ‘Marine,’” Neller said on Thursday.

“Wyatt is the epitome of Semper Fidelis, and we are hoping and praying for him and his family.” 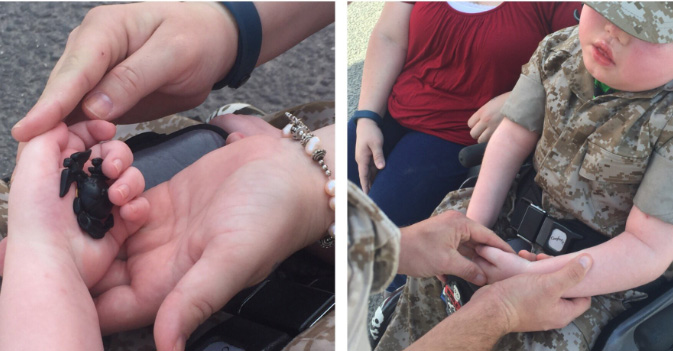