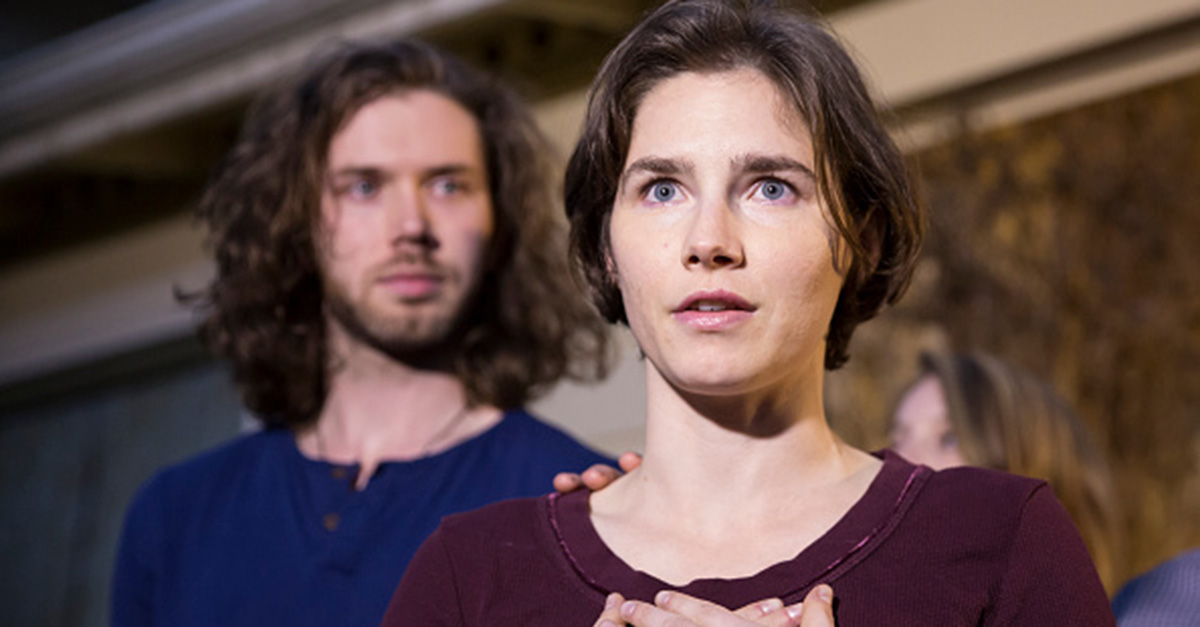 Photo by Stephen Brashear/Getty Images
SEATTLE, WA - MARCH 27: Amanda Knox speaks to the media during a brief press conference in front of her parents' home March 27, 2015 in Seattle, Washington. Knox and Raffaele Sollecito have been acquitted by Italy's highest court in the murder of British student Meredith Kercher, who was killed in her bedroom on November 1, 2007 in Perugia. Standing behind Knox is her fiance Colin Sutherland. (Photo by Stephen Brashear/Getty Images)

The woman convicted of convincing her boyfriend to kill himself through a series of text messages is getting support from another woman who gained fame because of a high-profile trial.

Amanda Knox, who spent years in an Italian jail after being convicted of killing her roommate, wrote an op-ed in the L.A. Times and said that even though it’s difficult, Michelle Carter deserves sympathy and professional help that Conrad Roy didn’t get before he took his own life at Carter’s encouraging.

Knox said she sees parallels in the so-called “Femme Fatale” narrative prosecutors used in her murder trial in Italy.

Sympathy is not what the Roy family expressed during a sentencing hearing that allowed Michelle Carter to go home to Plainville, for now, as a free woman.

Carter, 20, crouched down into the back of a car outside her family’s Plainville home hours after a sentencing hearing that sent Roy’s father rushing away from the courthouse in disappointment.

“Michelle Carter exploited my son’s weakness and used him as a pawn in her own little game. She has not shown any remorse,” Conrad Roy Jr., Conrad’s father, said.

First, Judge Lawrence Moniz issued Carter a two-and-a-half-year sentence, 15 months of which would be spent in prison.

Then, Moniz issued a stay while Carter’s appeals, allowing her to walk free, for now.

Explaining the move, Moniz said if an appellate court rules in a different way on her involuntary manslaughter conviction, it would be impossible to take back any prison time served in the meantime.

Defense Attorney Peter Elikan said the appeals process could take years to complete given the complicated case of Carter encouraging Roy to kill himself.

“Normally just mere words do not get you convicted,” he said. “This could go all the way to the Supreme Court and it’s going to decide whether she committed a crime or not.”

RELATED: A PA teacher molested two of her female students, and now the courts have decided her fate

Carter received a nod of support from Knox Friday morning. Knox, herself, was found guilty and then was acquitted of murder in Italy, writing:

Just because it’s hard to feel sympathy and understanding, that doesn’t mean it isn’t the right – and just – thing to do. Conrad Roy III needed our sympathy and our help and didn’t get it in time. Michelle Carter deserves the same sympathy and help now.”

Moniz added another condition to Carter’s sentencing. The 20-year-old is not allowed to ever profit from her involvement in Roy’s suicide, meaning she can not sell her story for a book, movie or TV show.

Carter’s attorney said that would be addressed in the appeal as well.