An odd form of protest by one resident against President Donald Trump — flying a Nazi flag beside the front door of their duplex — has forced the neighbors next door, a family of six, to pick up and move after a photo of the flag at the residence went viral and brought strangers out to protest them.

The Diaz family started to feel threatened when a passerby took a picture, put it on Facebook, and the sharing began. Then came the outrage, and angry protesters to their front door. Someone posted her address on Facebook.

Rosangela Diaz, the mother of four children, said she didn’t even know about the flag until she saw the Facebook post. The neighbor, who has not been identified, has said he flew it to make a “political statement” against President Trump.

Diaz is Hispanic, and her husband is black. She said her tires have been slashed and people have threatened to burn down their house.

“We’ve had people knocking on our door,” Diaz told Fox News. “Two men approached my kids on the street. I can’t get out of here fast enough.”

The neighbors, who said the flag was in protest of the uncertain current political climate that aided in sparking large protests Saturday against an executive order signed by President Trump to ban Muslims in seven countries from entering the United States, removed the flag following the outrage.

However, Diaz said it was too late. Their Wisconsin home was the target off too many threats, and she worried for the safety of her children.

RELATED: This is what happens if you’re a copy who flies a confederate flag in Georgia

The neighbors were not able to be contacted, apparently having disconnected their phone. They did tell a local news station that they were trying to make political statement, according to the New York Post.

They released the following statement: “[T]he reason we chose to do so was simple in our minds. To us, America today feels much like it’s heading towards an era likened to the times of Nazi Germany. Our president has spoken out in the past with plans of action that eerily mirror the times of Hitler. We were simply exercising our constitutional right to freedom of speech. We are very sorry for the extreme misunderstanding of our actions and we would like to let people know that we meant no disrespect.”

Perhaps a disclaimer explaining the protest might have helped. The FBI and the local police are investigating the threats made against the Diaz family. She sent up a GoFundMe Page to help raise money for the move and for lawyer fees. She plans to sue the people who made her address public.

“I live there with my four young children and my husband who is almost blind,” Diaz wrote in a statement on the page. “During this time, numerous threats were made to burn down the whole house [and] to knock on the door and punch people in the face.”

Diaz said a new flag has replaced the Nazi one: “Someone had hung a peace flag,” Diaz said. 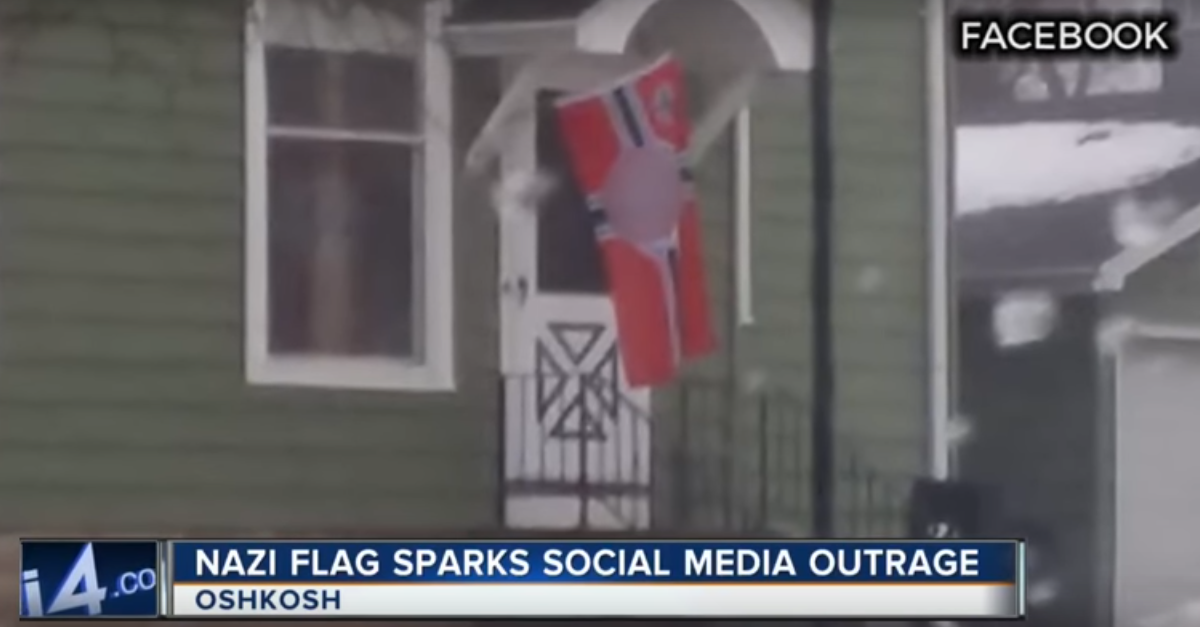