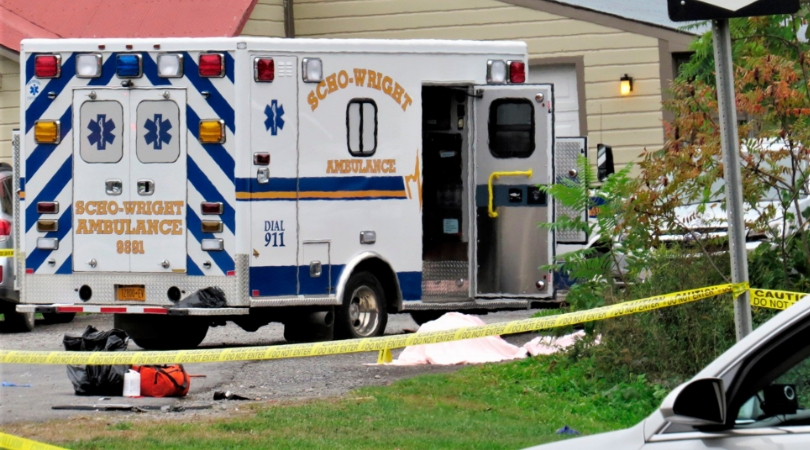 The New York State Police say that the operator of a limousine company involved in a deadly crash has been arrested. The arrest was announced in a brief press release Wednesday afternoon. It says Nauman Hussain was taken into custody following a traffic stop on a highway near Albany. No further details were released on the charges, and it was unclear whether the arrest was related to the crash investigation.

A phone call to Hussain’s lawyer was not immediately returned. Saturday’s limo crash in rural Schoharie killed 20 people. State officials say the limo involved in the wreck failed an inspection last month and shouldn’t have been on the road. The limo company had said problems with the vehicle had been corrected.

The driver of a limousine involved in a deadly crash in upstate New York was stopped in August by a state trooper in the same vehicle and told he lacked the proper license to drive the limousine. State police said Wednesday that a 2001 Ford Excursion limousine operated by Prestige Limousine and driven by Scott Lisinicchia was stopped by troopers on Aug. 25 in Saratoga Springs.

Lisinicchia was among 20 people killed in the same limousine on Saturday after it ran through a stop sign in rural Schoharie. Police say the trooper issued violations, advised that Lisinicchia could not operate the vehicle and “took steps to ensure that the vehicle was taken off the road.” The incident was originally reported by the Times Union of Albany.

Services are set for some of the 20 people killed when a limousine crashed off a rural upstate New York road last weekend. Savannah Devonne Bursese’s family will receive relatives and friends Thursday at a funeral home in Gloversville. The 24-year-old from nearby Johnstown was the youngest victim of Saturday afternoon’s crash in Schoharie (skoh-HAYR’-ee). A private service is planned for Friday.

The wife of a limousine driver involved in a New York crash that killed 20 people says her late husband expressed concerns about the company’s vehicles. Kim Lisinicchia ( lihs-ih-NIHK’-ee-uh) tells CBS in an interview broadcast Wednesday that her husband, Scott, stated several times that he needed a different vehicle but then trusted the company’s assurances that its “cars were all right.”

Prestige Limousine has been criticized for maintaining vehicles rife with violations and for employing a driver lacking a commercial license. Prestige’s lawyer, Lee Kindlon, says safety issues had been corrected. He says the driver might have misjudged his ability to stop at the bottom of a hill Saturday in Schoharie (skoh-HAYR’-ee), New York. Lisinicchia says her husband was “in excellent health” and drove a tractor-trailer for 20 years.


SCHOHARIE, N.Y. (AP) — The supersized limousine involved in a crash that killed 20 people outside an upstate New York country store recently failed a safety inspection and shouldn’t have been on the road, and the driver wasn’t properly licensed, Gov. Andrew Cuomo said Monday. The state ordered the owner, Prestige Limousine, shut down while an investigation continues into what caused Saturday’s wreck in Schoharie.

“In my opinion, the owner of this company had no business putting a failed vehicle on the road,” the governor said while attending a Columbus Day Parade in New York City. “Prestige has a lot of questions to answer.” The National Highway Transportation Safety Administration also said it was investigating the crash, which involved a stretch limo that Cuomo said had been rebuilt in a way that violated federal law.

A call to Prestige Limousine’s office in Gansevoort rang unanswered Monday. Federal records show the company has undergone five inspections and had four vehicles pulled from service in the last two years. The crash killed two pedestrians and 18 occupants of the limousine, which was carrying four sisters, relatives and friends to a brewery for a birthday party, according to relatives.

Amanda Halse sent her own sister a text around 1 p.m. saying she and her boyfriend, Patrick Cushing, had gotten in the limo and the group was headed to Brewery Ommegang in Cooperstown, according to her sister, Karina. The crash happened before she got a chance to reply. “My heart is sunken. It’s in a place where I’ve never felt this type of pain before,” Karina said as she visited the crash site Monday.

Amanda, 26, a waitress at a retirement community, was “a very strong and independent person” who didn’t like people to do things for her, according to her sister. “She would be the one to initiate things,” she said.

Authorities didn’t say whether the limo occupants were wearing seatbelts, give the speed of the limo or speculate what caused the limo to run a stop sign at an intersection and slam into a parked SUV by the Apple Barrel Country Store and Cafe. Autopsies were being performed, including on the driver, to see if drugs were alcohol were a factor. The intersection is a known danger spot that has long worried locals, even after an overhaul following a deadly 2008 accident there, according to Apple Barrel manager Jessica Kirby.

Since the reconstruction, three tractor-trailers have run through the same stop sign and into a field behind her business, she said. Officials worked with the state to outlaw heavy trucks, she said, but there are still wrecks. “We have been asking for something to be done for years,” she said in an email.

The 2001 Ford Excursion limousine was traveling southwest on Route 30 in Schoharie, about 170 miles (270 kilometers) north of New York City when it failed to stop at a T-junction with state Route 30A, state police said. The limo went across the road and hit an unoccupied SUV parked at the Apple Barrel, a local institution and popular stop for autumn leaf-peepers. The impact killed two pedestrians standing nearby. Relatives said the limousine was bound for a 30th birthday celebration for the youngest of the four sisters.

“They did the responsible thing getting a limo so they wouldn’t have to drive anywhere,” their aunt, Barbara Douglas, said Sunday. “They were wonderful girls. They’d do anything for you and they were very close to each other and they loved their family.” A vigil will be held Monday night in Amsterdam, where some victims lived. Grief counseling is being offered at the Amsterdam school district, where victim Abby Jackson taught.

The crash appeared to be the deadliest land-vehicle accident in the U.S. since a bus ferrying nursing home patients away from Hurricane Rita caught fire in Texas 2005, killing 23. And it is the deadliest transportation accident overall since February 2009, when a plane crash near Buffalo, New York, killed 50 people, said Robert Sumwalt, chairman of the National Transportation Safety Board. The Board is investigating the crash, including whether the limo had any mechanical problems.

There was no information Sunday on the limousine, its origin or its integrity. But safety issues on such vehicles have arisen before, notably after a wreck on Long Island in July 2015 in which four women were killed. They were in a Lincoln Town Car that had been cut apart and rebuilt in a stretch configuration to accommodate more passengers. The limousine was trying to make a U-turn and was struck by a pickup.

Watch: The Best Way to Remove a Fish Hook…