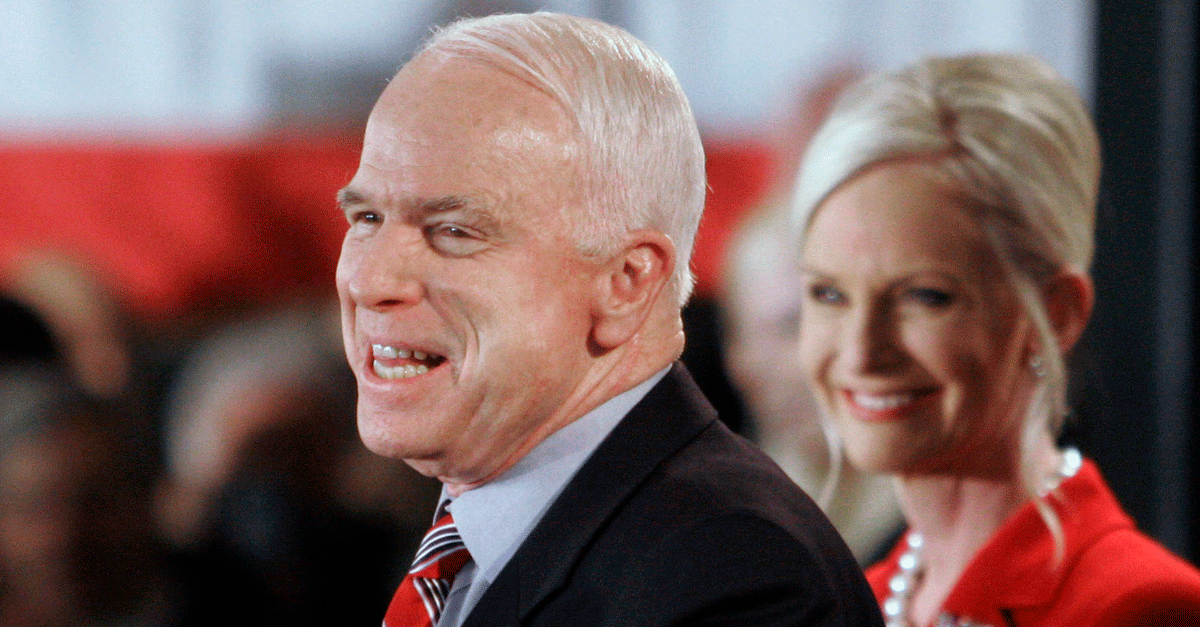 Staff will update this post as more information becomes available.

WASHINGTON (AP) — John McCain, the six-term Arizona senator and 2008 Republican presidential nominee, has chosen to discontinue medical treatment for his brain cancer, his family said Friday. In a statement, the family said McCain had surpassed expectations for survival, but “the progress of disease and the inexorable advance of age render their verdict.” The family added, “With his usual strength of will, he has now chosen to discontinue medical treatment.”

The senator, who would be 82 next week, has been away from the Capitol since December. If he should resign his seat or die soon, Republican Arizona Gov. Doug Ducey would name a replacement through the 2020 election. The winner of that election would serve the remainder of McCain’s term through 2022. The GOP currently holds a bare 51-49 Senate majority.

McCain has been a frequent target of criticism from President Donald Trump, especially for his vote against a Republican replacement for “Obamacare,” the health care law approved under President Barack Obama.
Trump signed a military policy bill this month named for McCain, but in a sign of their testy relationship the president made no mention of McCain’s name in remarks at a signing ceremony.

The son and grandson of Navy admirals, McCain is a former Navy pilot and was held as a prisoner of war in Vietnam for more than five years. He was elected to Congress in the early 1980s and elected to the Senate in 1986, replacing Barry Goldwater who retired. McCain gained a reputation as a lawmaker who was willing to stick to his convictions rather than go along with party leaders. It is a streak that draws a mix of respect and ire. Senate Majority Leader Mitch McConnell said on Twitter that he was “very sad to hear this morning’s update” from McCain’s family.

“We are so fortunate to call him our friend and colleague. John, Cindy, and the entire McCain family are in our prayers at this incredibly difficult hour,” McConnell said.

Arizona Gov. Ducey called McCain “an American hero” who always put his country before himself. Ducey said a “spirt of service and civility” guided McCain’s life, standing as a model for Americans regardless of political affiliation.

McCain’s wife, Cindy, tweeted: “I love my husband with all of my heart. God bless everyone who has cared for my husband along this journey.”

McCain underwent surgery in July 2017 to remove a blood clot in his brain after being diagnosed with an aggressive tumor called a glioblastoma. It’s the same type of tumor that killed Sen. Edward M. Kennedy at age 77 in 2009.

McCain rebounded quickly, however, returning to Washington and entering the Senate in late July to a standing ovation from his colleagues. In a dramatic turn, he later cast a deciding vote against the Republican health care bill, earning the wrath of Trump, who frequently cites McCain’s vote at campaign events.

McCain’s condition worsened last fall and he has been in Arizona since December. A source close to McCain who asked not to be identified said Friday the senator was at his Arizona ranch with his family. He is a long-term survivor of melanoma, a deadly skin cancer. Doctors classified his brain cancer as a “primary tumor,” meaning it’s not related to his former malignancies.

McCain ran unsuccessfully for the Republican presidential nomination in 2000, then won it in 2008 before losing the general election to Obama. He returned to the Senate, determined not to be defined by a failed presidential campaign in which his reputation as a maverick had faded.

When Republicans took control of the Senate in 2015, McCain, the scion in a decorated military family, embraced his new influence as chairman of the Senate Armed Services Committee, pushing for aggressive U.S. military intervention overseas and eager to contribute to “defeating the forces of radical Islam that want to destroy America.”

Asked how he wanted to be remembered, McCain said simply: “That I made a major contribution to the defense of the nation.”

Former Connecticut Sen. Joseph Lieberman, a close friend, said Friday that “becoming John McCain’s friend has been one of the great blessings of my life. Today I am praying for him and his family.”

Mitt Romney, the GOP’s 2012 presidential nominee, said on Twitter, “No man this century better exemplifies honor, patriotism, service, sacrifice and country first than Senator John McCain. His heroism inspires, his life shapes our character. I am blessed and humbled by our friendship.”
___
Associated Press writer Laurie Kellman contributed to this story.
___
This story has been corrected to say McCain’s term ends in 2022, not 2020.