Thousands Line up to Say Goodbye to John McCain 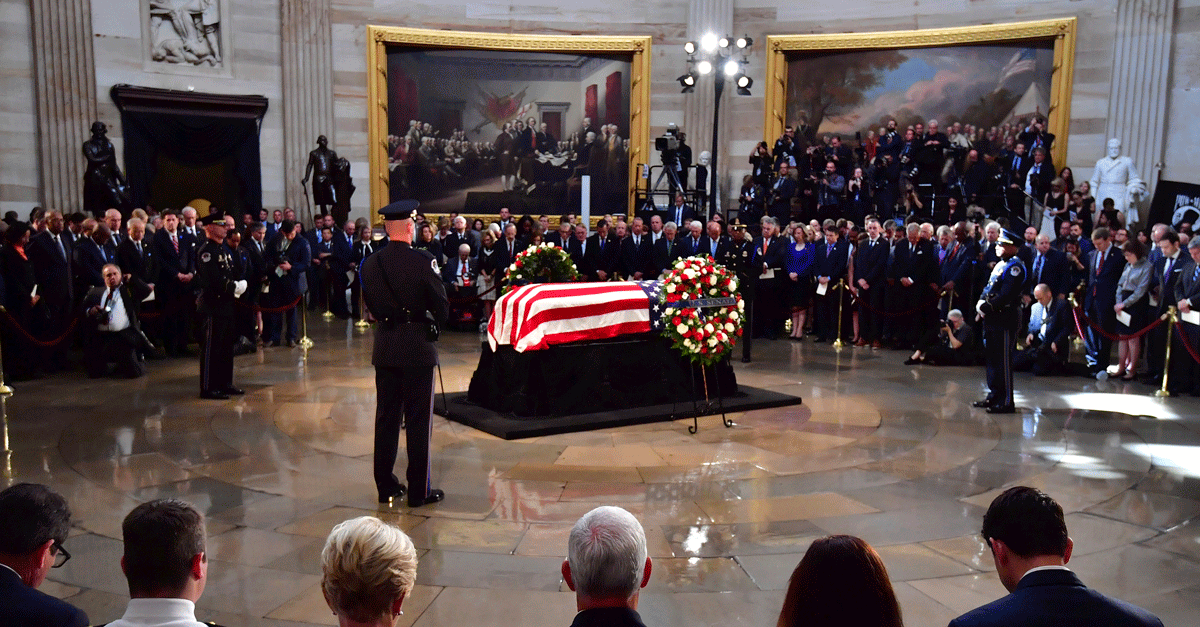 WASHINGTON (AP) — Thousands of people lined up for blocks outside the U.S. Capitol Friday to say goodbye to John McCain as officials, relatives and friends paid their tributes inside to the Vietnam hero and longtime senator lying in state under the majestic dome. Earlier, Vice President Mike Pence, lawmakers and guests paid tribute at an emotional ceremony surrounding McCain’s casket in the vast rotunda. A light rain fell as McCain’s casket was carried into the Capitol by members of America’s military services. His family watched from the steps.

“It is only right that today, near the end of his long journey, John lies here, in this great hall, under this mighty dome, like other American heroes before him,” said Senate Majority Leader Mitch McConnell. “We thank God for giving this country John McCain.”

House Speaker Paul Ryan called McCain “one of the bravest souls our nation has produced.” McCain, a former Navy aviator, really did “talk like a sailor,” Ryan said, drawing smiles from the crowd. “But you see, with John, it wasn’t feigned disagreement. The man didn’t feign anything. He just relished the fight.”

Trump, who has mocked McCain for being captured during the Vietnam War, was asked to stay away from the Capitol service, people close to the White House and the McCain family said.

After the service, McCain’s wife of 38 years, Cindy, bowed over the casket, clasped her hands and appeared to pray there. Later, she sat at her husband’s desk with Sen. Lindsey Graham at her side in the semi-darkened Senate. Graham plucked two roses from the vase on the late senator’s desk and gave them to her, according to two people close to McCain with knowledge of the private moment.

The ceremony was the first of two days of services in Washington honoring the Arizona senator, who served in Congress for 35 years. On Saturday, McCain’s procession will pause by the Vietnam Memorial and head for Washington National Cathedral for a formal funeral service. At McCain’s request, two former presidents — Democrat Barack Obama and Republican George W. Bush — will speak.

McCain’s funeral puts him back in the spotlight a few miles from Trump’s doorstep, in the city where the senator, who died last Saturday days short of his 82nd birthday, worked and collected friends and enemies — some in both camps at different times. The procession was highlighting what McCain found important, some of which contrast with Trump’s style and priorities.

McCain chose a Russian dissident as a pallbearer, though Trump has professed repeatedly his affinity and admiration for Russian President, Vladimir Putin — praise that came amid special counsel Robert Mueller’s probe into Russian meddling in the 2016 presidential election. The procession’s pause at the Vietnam Veterans Memorial, where McCain’s widow, Cindy, is expected to lay a wreath, will highlight McCain’s military service and his more than five years as a prisoner of war.

Trump obtained deferments during the Vietnam War for his college education and then for bone spurs in his heels. Trump on Friday was expected to leave Washington in early afternoon, to head to North Carolina for an event on retirement security about the same time the public will start filing past McCain’s casket.

The McCain farewell began Wednesday and Thursday in Arizona, where he and Cindy McCain raised their family. Former Vice President Joe Biden and others provided a preview of the tributes to come. None of the speakers at the North Phoenix Baptist Church on Thursday uttered Trump’s name. But Biden, who is considering challenging Trump in 2020, made what some saw as a veiled reference to the president. He talked about McCain’s character and how he parted company with those who “lacked the basic values of decency and respect, knowing this project is bigger than yourself.”

Biden said McCain “could not stand the abuse of power wherever he saw it, in whatever form, in whatever country.” Biden advised McCain’s friends and family to remember snapshots of him, such as a glance or a touch. “Or when you saw the pure joy the moment he was about to take the stage on the Senate floor and start a fight. God, he loved it.”

At the end of the nearly 90-minute ceremony, McCain’s casket was wheeled out of the church to “My Way,” in tribute to a politician known for following his own path. Trump and his wife, Melania, danced to the same song at the new president’s inauguration in 2017.

By LAURIE KELLMAN and MATTHEW DALY, Associated Press
___
Associated Press writers Juliet Linderman and Lisa Mascaro in Washington, and Anita Snow, Jacques Billeaud and Terry Tang in Phoenix contributed to this report.
___
Follow Kellman on Twitter at http://www.twitter.com/APLaurieKellman
___
This story has been corrected to change Thursday to Friday in lead paragraph