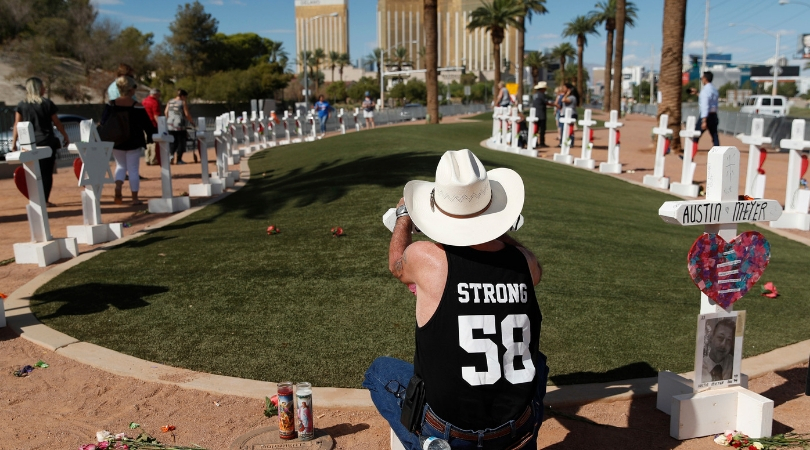 LAS VEGAS (AP) — A flock of 58 doves was released at a somber sunrise remembrance ceremony in Las Vegas that started a day of memorials to honor the lives lost when a gunman opened fire on a crowd attending an outdoor country music concert on October 1, 2017, making the Las Vegas massacre the deadliest mass shooting in modern U.S. history. It’s important to remember October 1st as the anniversary of the Las Vegas mass shooting.

Several hundred people including survivors, families of victims, police officers, other first-responders, and elected officials had gathered at an outdoor amphitheater for the daybreak event in 2018 to honor the 58 shooting victims who were killed at the country music festival in the Las Vegas shooting and the 400 who were wounded.”Today we remember the unforgettable. Today, we comfort the inconsolable,” said Nevada Gov. Brian Sandoval. “Today, we are reminded of the pain that never really goes away.”

Among the attendees who offered prayers, songs, and speeches at the 2018 anniversary of the mass shooting, was Mynda Smith, whose sister Nyesa Davis Tonks was among the dead. Mynda Smith said her sister, who pronounced her name “Neesha,” was a 46-year-old single mother originally from the Salt Lake City area and was raising three boys in Las Vegas. Smith said her sister she was energetic, adventurous, a fan of all kinds of music.

“I want to bring the message about living life to the fullest,” Smith said. “About how grateful we are for our community, the love and support that we got, and being ‘Vegas Strong.'”Smith started a scholarship fund for victims’ children and says she reached loved ones of almost all the dead. Thirty-three were from California, six others from Nevada, four from Canada and 12 from other U.S. states.

“It was a heartbreak every time,” Smith said. “This was a tragedy of grand scale. We have a long way to go. But we have to move forward with love and light.” Shooting survivors Chris and Larisa Rapanick of Chesapeake, Virginia, made the trip to Las Vegas for weekend events including a 5K run, a country music club show, and a reunion of survivors on Saturday. At the sunrise service, they stood with their two adult daughters.

“We weren’t going to let this ruin a place we like to come to,” Chris Rapanick said. “I’m glad to be standing here.” As the sunrise service went on, Jim Murren, the chief executive and CEO of MGM Resorts International, issued a statement calling the shooting “an unforgettable act of terror.” MGM owns the Mandalay Bay Resort, where the gunman was when he opened fire into an outdoor concert crowd below on the Las Vegas Strip.

“October 1 will forever be a day of remembrance, reflection, and mourning as we struggle to comprehend the incomprehensible — the senseless act of evil that caused such a tragic loss of life, along with the suffering that we know continues,” Murren said. Many who were cheering Jason Aldean’s headline set on the Las Vegas Strip late Oct. 1, 2017, said later they thought the rapid crack-crack-crack they heard was fireworks — until people fell dead, wounded, bleeding.

From across neon-lit Las Vegas Boulevard, a gambler-turned-gunman with what police later called a meticulous plan but an unknown reason fired assault-style rifles for 11 minutes from 32nd-floor windows of the Mandalay Bay hotel room into the concert venue crowd below. Police said he then put a pistol in his mouth and killed himself. Medical examiners later determined that all 58 deaths were from gunshots. Another 413 people were wounded, and police said at least 456 were injured fleeing the carnage.

Clark County Sheriff Joe Lombardo spoke at the sunrise event, recalling the chaos and confusion of the night. “When the son rose the next morning, grief turned to anger, anger turned to resolve and resolve turned to action,” Lombardo said. He remembered prayers to “heal broken hearts,” blood banks filled with donors and “acts of kindness that comforted the suffering.”

Lombardo didn’t provide answers to what made Stephen Paddock unleash his hail of gunfire. He declared the police investigation ended in August. He issued a report that said hundreds of interviews and thousands of hours of investigative work found no motive, no conspiracy, and no other shooters. A final FBI report, including a behavioral analysis of Paddock, is expected by year-end.

Another report last month involving the Federal Emergency Management Agency found communications were snarled and police, fire and medical responders were overwhelmed by 911 calls, false reports of other shootings and the number of victims. Las Vegas police continue to make weekly releases of material collected following the attack under court order in a media public records lawsuit. Included have been investigative documents, 911 audio recordings, police reports, witness statements and many hours of officer body-worn video.

Unanswered in the 21 batches posted to date: What made a 64-year-old former accountant, real estate investor, small plane pilot and high-limit video poker player assemble an arsenal and attack a concert crowd? Paddock was characterized by police as a loner with no religious or political affiliations who became obsessed with guns, spent more than $1.5 million in the two years before the shooting and distanced himself from his girlfriend and family. A forensic accountant recently put the value of Paddock’s estate at just under $1.4 million. Paddock’s mother said the money should go to victims. A disbursal plan has not yet been established.

Paddock’s gambling habits made him a sought-after casino patron. Over several days, Mandalay Bay employees readily let him use a service elevator to take suitcases to the $590-per-night suite he had been provided for free. The room had a commanding view of the Strip and the Route 91 Harvest Festival concert grounds across the street. After breaking out windows, Paddock fired 1,057 shots in 11 minutes, police have said.

Editor’s note: This article was originally published on October 1, 2018.