Arizona — Yeah, Arizona — Got Pounded with Snow Over the Weekend and Texas is Next 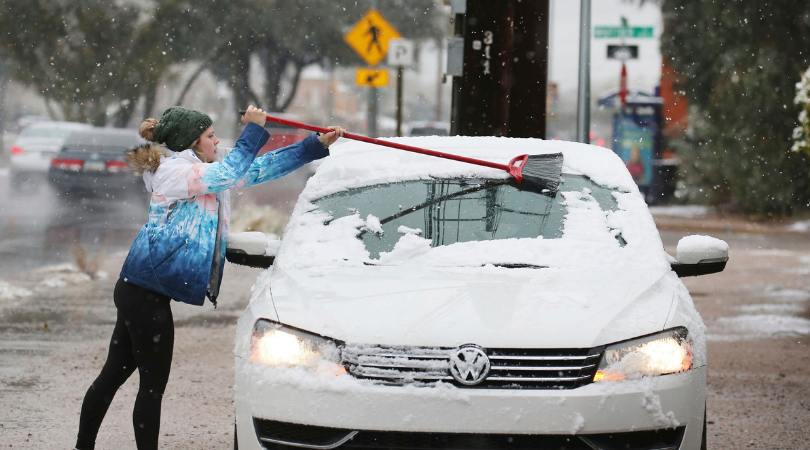 A winter storm dumped record-breaking amounts of snow in Arizona and forced the closure Friday of roads, schools and government offices across the Southwest.

The storm was pushing through eastern Arizona and heading for New Mexico and Texas after dumping nearly 3 feet (0.9 meters) of snow Thursday at the Flagstaff airport during the city’s snowiest day on record, and more than 2 feet (0.6 meters) in Payson, a town that logs that much snow as its yearly average.

Residents were digging out from the weather that the National Weather Service characterized as “not your average” storm.

Chad Williamson cleared his driveway in Flagstaff multiple times over the past two days and watched as icicles hanging from his roof fused together and formed a large spike.

“My biggest thing is our gutters because of the ice,” he said. “I don’t know how they’re going to hold up.”
Roofing companies were busy answering calls to clear roofs to avoid a collapse under the weight of the snow. Officials in Arizona and Durango, Colorado, urged homeowners not to delay the work.

“If snow sits on your roof, when it starts to melt, that’s when it turns to ice and water and gets real heavy,” said Larry Cook, owner of Big Sky Roofing in Flagstaff.

Schools across northern Arizona, southern Nevada and southwestern Colorado were closed — many for a second day — because of threats posed by snow-packed or slick roads. Government offices either closed or delayed the start of their day.

“It is by no means over for us,” meteorologist Mark Stubblefield said in Flagstaff. “It’s still dangerous to travel.”

The freeze-and-thaw cycle after a storm will keep roads icy, and melting snow trapped by a stable air mass will create foggy conditions early next week, the weather service said.

“We’re not looking at warm enough temperatures to melt 40 inches of snow,” meteorologist Dan Leblanc said.
Payson, about 90 miles (144 kilometers) northeast of Phoenix, essentially was shut down Thursday when state highways in and out of town were closed.

The Walmart in town was reopened Friday for people with emergency needs after being shuttered overnight while crews checked snow accumulation on the roof. The American Red Cross said about 55 stranded travelers slept at a shelter Thursday in Payson.

Farther south, snow accumulated Friday in central and downtown Tucson, surprising many people in the city where snow is rare. Mount Lemmon, a popular hiking spot outside the city, got 38 inches (97 centimeters) of snow and was closed — even to residents.

A Navajo Nation utility company restored power to 8,000 people after heavy snow and ice built up on electric lines.

In Colorado, a stretch of highway north of Durango was closed for avalanche control. The storm dropped nearly 30 inches (0.76 meters) of snow at Wolf Creek, a popular ski area. It was expected to hit Denver around rush hour Friday causing traffic headaches.

The Flagstaff airport was closed Friday, and Southwest Airlines warned that flights in Denver and Tucson could be disrupted by the weather.

Forecasters were calling for 8 inches (20 centimeters) of snow in pockets of far northern New Mexico.

:Watch: Watch This Guy Eat it HARD on Some Black Ice