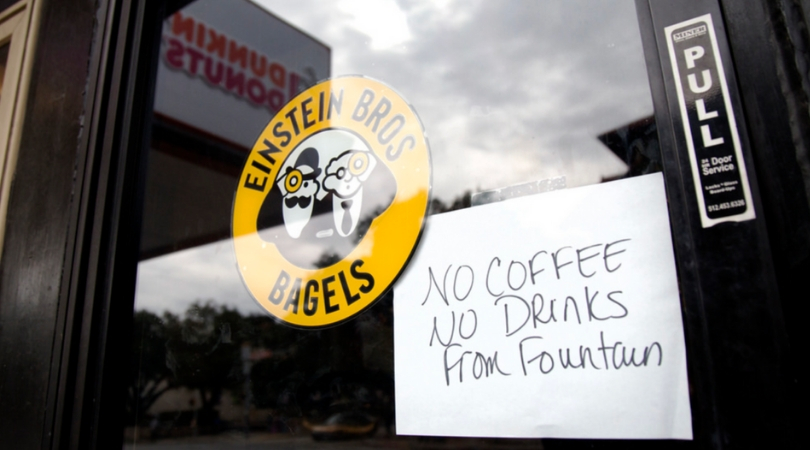 Recent flooding and heavy waters have prompted Austin officials to take immediate action by alerting Texans to boil their water before consuming. Officials are urging Austin citizens to reduce the amount of water they use until health experts can confirm the water is drinkable. The city?s warning sent hundreds of people to stores to buy bottled water, stripping store shelves clean.

The boil water notice was given on Monday, October 22 by City of Austin officials. Health officials are saying the tap water may contain bacteria and virus’ that could make people sick. The organisms found inside the bacteria are extremely small, and even potentially a droplet of water that is affected could cause an illness. Travis County emergency management says the boil-water order could last 10 to 14 days, as the city’s water treatment system tries to restore normal output. The order is affecting at least 888,000 people in the city.

Live in Austin? Boil yo’ water. And read this. https://t.co/Nk4LBrElYA

Heavy rain has caused flooding to occur and has washed silt, mud, and other contaminants to the Colorado River and nearby lakes that supply Austin?s water. The city shut down a portion of its three treatment plants for cleaning. Officials state that customers in Austin typically use 120 gallons of water daily.

Normally, water plants produce 300 million gallons a day, but the past two days, the plant hasn?t produced over 100 gallons. Unfortunately, the issue is affecting coffee shops and restaurants the most, forcing to close their door until they can safely reopen.

As of October 23, there has been no positive test for bacterial infiltration of the water system, but there is still a slight chance people could get sick. CDC states most household water filters typically do not remove any viruses or bacteria, which is why you should boil water for a minimum of three minutes to make it safe for drinking, cooking, or making ice.

One should be concerned with pets since they can also get sickened by the bacteria and can spread the disease to humans or anyone who comes in contact with their feces. Brushing teeth water needs to be purified beforehand. As for showers, one should be fine as long one doesn’t drink it. One might also want to consider turning off the water line to your fridge and avoid ice cubes since they might be contaminated with the water.

Water for drinking, cooking and making ice should be boiled and cooled prior to consumption. To rapidly cool your boiled water, mix water and salt in a pitcher and add ice. This is the first time a citywide boil-water notice has been issued in the history of the water utility. Until further notice, Austin Water says residents may not:

Watch: How Much Do You Know About Topo Chico?