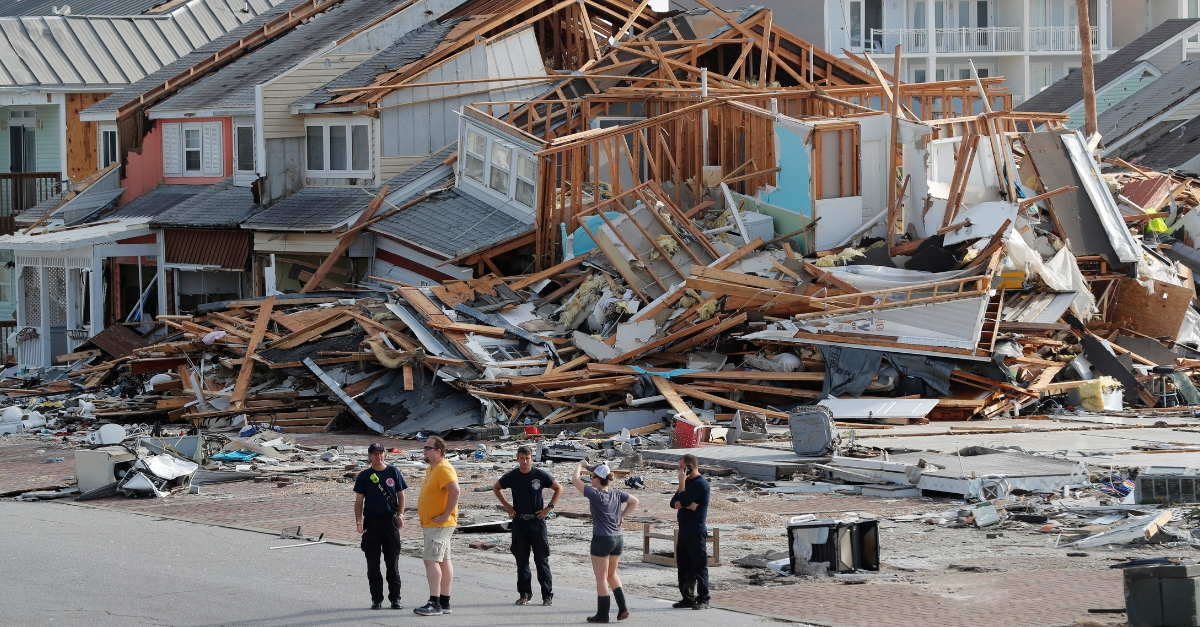 MEXICO BEACH, Fla. (AP) — Search and rescue teams looked for bodies through a ruined landscape of smashed homes and piles of sand Friday, while more deaths were reported in Virginia, 600 miles (965 kilometers) from where Hurricane Michael made landfall.

Michael, so powerful that it remained a hurricane for 12 hours after making landfall in Mexico Beach, thrashed the Carolinas and Virginia and was growing stronger again over the Atlantic, where the National Hurricane Center predicted it would eventually menace Britain with tropical-storm force winds.

Linda Marquardt and her husband somehow survived the very worst of it in Mexico Beach, where Hurricane Michael’s eye passed directly over their home.

Surging water filled their first floor, now muddy and ruined. They’re surrounded now by devastation: fishing boats and cars tossed like toys, empty slabs where people hopefully escaped before houses exploded in 155 mph (249 kph) winds and were washed away by the storm surge.

Row after row of beachfront homes were obliterated by the epic Category 4 hurricane. The destruction along Florida’s white-sand northern Gulf Coast was called catastrophic. Officials predicted rebuilding costs in the billions.

“All of my furniture was floating,” said Marquardt, 67. “A river just started coming down the road. It was awful, and now there’s just nothing left.”

All told, more than 900,000 homes and businesses in Florida, Alabama, Georgia and the Carolinas were without power.

Thousands of National Guard troops, law enforcement officers and rescue teams still had much to do in the hardest hit area: Florida’s Panhandle. Families living along the Panhandle are now faced with a struggle to survive in a perilous landscape of shattered homes and shopping centers, the storm debris spread far and wide.

Most of Panama City’s homes were still standing, but no property was left undamaged. Downed power lines and twisted street signs lay all around. Aluminum siding was shredded and homes were split by fallen trees. Hundreds of cars had broken windows. Patients were moved out of hurricane-damaged hospitals and nursing homes.

Tyndall Air Force Base “took a beating,” so much so that Col. Brian Laidlaw told the 3,600 men and women stationed on the base not to come back. Many of the 600 families who live there had followed orders to pack what they could in a single suitcase as they were evacuated.

A small “ride-out” team that hunkered down as the hurricane’s destructive eyewall passed directly overhead ventured out to find nearly every building severely damaged, many a complete loss. The elementary school, the flight line, the marina, the runways — all were devastated.

“I will not recall you and your families until we can guarantee your safety. At this time I can’t tell you how long that will take, but I’m on it,” Laidlaw said.

Florida Gov. Rick Scott, who was going out with the National Guard Friday to survey the damage from the air and on the ground, called it “unimaginable destruction.”

“So many lives have been changed forever. So many families have lost everything,” he lamented.

An insurance company that produces models for catastrophes estimated the damage at $8 billion. Boston-based Karen Clark & Company included privately insured wind and storm surge damage to residential, commercial and industrial properties and vehicles in its number. It doesn’t include losses covered by the National Flood Insurance Program.

A man outside Tallahassee, Florida, was killed by a falling tree was the first of “four storm-related fatalities” announced by the Gadsden County Sheriff’s office. An 11-year-old girl in Georgia died when Michael’s winds picked up a carport and dropped it through the roof of her grandparents’ home. A driver in North Carolina was killed when a tree fell on his car.

Michael then blew through Virginia, where authorities said five people were killed. Four of them drowned, including James King of Dry Fork, Virginia. A sheriff’s deputy and a local resident tried to save him after his vehicle got caught in high water, but “the floodwaters were too deep and two swift,” state police said Friday.

A Virginia firefighter — Lt. Brad Clark — was killed when a tractor-trailer slammed into his fire truck on a slick road in the storm.

Other people were pulled to safety from wrecks and flash floods across the Carolinas and Virginia as tropical-storm force winds downed trees and power lines, leaving hundreds of thousands without power.

Some fear the toll can only rise as rescue teams reach isolated areas and work through storm debris.

More than 375,000 people up and down the Gulf Coast had been ordered or urged to clear out as Michael closed in. But emergency authorities lamented that many ignored the warnings. At ground zero in Mexico Beach, state officials said 285 people defied a mandatory evacuation order.

Now they have the grim task of accounting for all who stayed behind. National Guard troops found 20 survivors initially Wednesday night, and more rescue crews are arriving. But the fate of many residents was unknown.

Mishelle McPherson and her ex-husband searched for a friend’s elderly mother who thought she would be OK in her small cinderblock house just 150 yards (meters) from the Gulf. That home is now smashed, with no sign of the woman.

“Do you think her body would be here? Do you think it would have floated away?” McPherson asked.