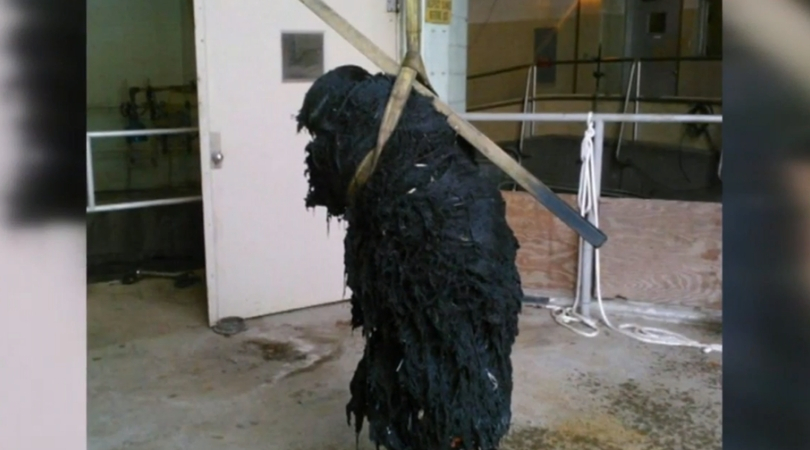 In today’s “things I don’t want to see, but I ran into it on the Internet, and now I’m really really grossed out”, water plant experts in South Carolina shared unbelievable images of how wipes can wreak havoc on a sewer system. Yes, the gross image shows what baby wipes can do when flushed down the toilet, causing them to clog up and create what can only be described as a black large gooey clump of hideous trash straight out of a ‘goosebumps’ book.

The Plum Island Wastewater Treatment plant in Charleston sent divers 80 to 90 feet deep into a ?raw sewage? to clear heaping piles of wipes that were clogging the system. Crews reportedly worked 24/7 to get the wipes out, three days later clearing the pathway. The crew collected thousands of pounds of baby wipes.

Then we sent divers 80-90 feet deep into the wet well/raw sewage to search in complete darkness with their hands to find and identify the obstruction. As we expected, they came up with these large masses of wipes in their first two loads, with more to come. pic.twitter.com/XcmZXf9ECF

According to officials, crew members also found other items such as string, hair, tampons, makeup pads, baby wipes, fat and grease, and oil. The Charleston Water System shared the pictures of the blackened mass on Twitter, warning residents that wipes do not disintegrate, even though the packaging claims they are ?flushable?.

Divers swam through ?wet/raw sewage? in complete darkness using their hands to find the source of obstruction. They came up with large masses of wipes in their first two loads, with more to come. Divers also removed a big piece of metal and a baseball that was obstruction the way. How a baseball fits inside a toilet is beyond me, but that’s pretty impressive.

They also found a baseball and a big piece of metal. Don't flush stuff like this. Joking of course, but you should only flush #1, #2, and toilet paper. The photo looking down into a pool of wastewater shows many other non-flushables. We made this pic low-res for your benefit. pic.twitter.com/fInq5YWU5a

The Charleston Water System stated the divers were are all hosed down with bleach before they are able to remove the dive suit to avoid all sorts of contamination. Why is this a huge problem? Well, unlike toilet paper, wipes have trouble breaking apart after they are flushed, which causes serious damage to city sewer systems. The issue even prompted one Minnesota city to file a complaint against any major consumer good company, including Procter & Gamble in 2015.

So…maybe next time try and avoid flushing a wipe down the toilet and just put it in the trash. Save these men a trip down under. What can go down your toilet? Simple…number 1 and number 2.

Watch: How To Make A DIY Camping Toilet