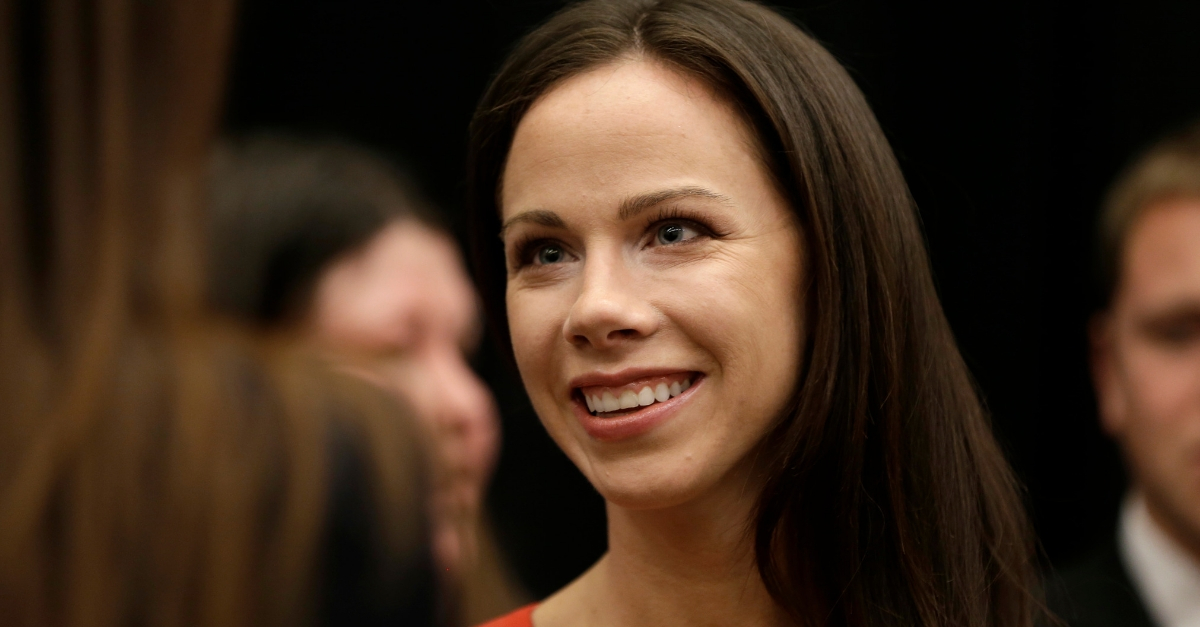 Only 20 family members witnessed the simple yet romantic ceremony, which was held at the Bush family compound in Kennebunkport, Maine, in the backyard overlooking the ocean.

“A very short, sweet ceremony” is how Barbara, 36, described it to PEOPLE.

After Barbara’s father walked her down the aisle, the bride and groom exchanged vows in front of their immediate family, including former President Bush, Mrs. Bush, and Barbara’s grandfather, former President George H.W. Bush, 94. Barbara’s twin sister, Jenna Bush Hager, served as matron of honor, and her daughters, Margaret, 5, and Poppy, 3, were flower girls along with Craig’s niece, Emma, 5. Poppy did double duty at the ceremony, also serving as the ring bearer.

Congrats to #BarbaraBush and #CraigCoyne! The couple tied the knot in a secret and romantic ceremony at the Bush family compound in Maine over the weekend. Link in bio for all the pretty pics! | 📷: Paul Morse

Though Barbara’s grandmother, former First Lady Barbara Bush, died at 92 in April, the bride accessorized her custom Vera Wang gown of ivory silk crepe with a sentimental reminder of her namesake.

“It’s really sweet. The ‘something borrowed’ that I’m wearing is this bracelet that my grandfather gave to my grandmother on their 70th anniversary,” Barbara told PEOPLE.

The former first daughter also revealed that she and Coyne — who has acted in the 2005 hit Jarhead, as well as independent films such as Look at Me and The Snowtown Murders — tied the knot after a whirlwind, five-week engagement and in the same week when Coyne relocated from Los Angeles to make his new home with Barbara in Manhattan.

The couple, who have kept their romance under wraps until now, were set up by friends on a blind date last November and committed as a couple by New Year’s Eve — despite living on opposite sides of the country, with Coyne in Los Angeles and Barbara in New York.

Barbara says it was during a family gathering at Kennebunkport this summer that she and Coyne were walking along the oceanside rocks when he suddenly dropped to his knee in the same spot where Barbara’s grandparents got engaged almost exactly 75 years earlier, in August 1943.

“It’s just been a very sweet romance,” Barbara says. “And we’ve been long-distance for most of it — he’s been in LA and I’ve been in New York — but we’ve gotten to spend a lot of time together.”

While her more gregarious twin, Jenna, also 36 and a correspondent for NBC’s Today show, married Henry Hager in 2008 and had two daughters, Barbara has kept her love life intensely private as she devoted time to building from scratch a nonprofit group that trains and deploys young professionals to address community health problems in under-served areas in the U.S. and Africa.

As CEO of Global Health Corps, which she co-founded in 2008, Barbara revealed to PEOPLE in 2013 just how little her work allowed for time at home. In the past year she’d been to Rwanda, Burundi, Malawi, Uganda, Zambia and several U.S. cities.

“I’ve spent so much time in Africa,” she said at the time, “I know the taxi drivers at the airports.”

Being the unmarried twin brought with it raised eyebrows, which Barbara addressed in her 2017 memoir Sisters First, co-written with Jenna.

“I have heard every variation of the question: ‘Why aren’t you married?’ My answer is always the same: ‘If I wanted to be married, I would be.’ I’ve had wonderful partners but there was always too much work to do, too much of the world to be seen.”

During a September, 2017 interview with PEOPLE at her downtown Manhattan apartment, Barbara was asked if she was ready to take a step back and make more time for a partner and children of her own.

“I’m definitely at a different place. It’s not a startup anymore,” she said. “I would love to have a family, if that’s right for me.

“I don’t think it’s either/or,” Barbara continued. “I still think there’s too much work to do and too many places to see and too much to experience in life.”

At the time, she was in the midst of what would be a year-long search to find her replacement as CEO. In January, Barbara announced that Daniela Terminel would take the reins as CEO while she would remain involved as Global Health Corps’ board chair.

“To be able to step away from something we’ve worked so hard to build means…that we did it!,” she wrote in the announcement published on Medium. “Or rather that we’re doing it and that we’ll keep it up.”

In her 2013 PEOPLE interview, Barbara said that she wanted to give Jenna’s then-baby daughter Mila a cousin one day, but it’s “just not what I am focused on right now.”

At the time, she was 31. Barbara later wrote in Sisters Firstabout her “first devastating breakup” while in her early 30s: “I’d ride the subway, wondering if anyone could see that inside my chest, my heart was torn in two.”

In the alternating chapters of Sisters First that Jenna wrote, she lamented how strangers were more interested in Barbara’s lack of a husband than her important work with GHC.

“When people stop me and inquire about my more elusive sister, they typically ask ‘Is she married?” Jenna wrote. She always wanted to tell people about her Barbara’s global accomplishments but held back. Until one day she didn’t.

At an event before Sisters First went to press, a woman asked Jenna, “Why isn’t your sister married?”

She wrote: “I took a deep breath and responded, ‘She is married. To her work, Global Health Corps. You can Google it.”

Read: You’ll Never Guess What Happened During This Father-Daughter Dance!

About the author: PEOPLE.com