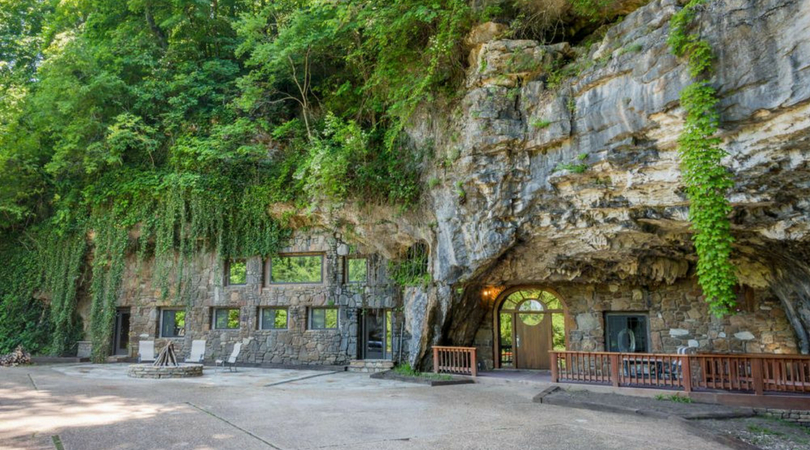 You know that saying, “I just want to run away and live in a cave?” Well, today is your lucky day, because indeed, the Beckham Creek Cave is on the market, and it is an actual cave! Undergoing several transformations since its ‘inception’ in the 1980’s, the bat cave is listed for $2.75 million. The unique estate is carved into the side of a slab of the Ozark Mountain in Arkansas and has a very intriguing story.

Beckham Cave is special to so many people for so many reasons! It's truly an indescribable place! Share you reasons with us and #yourcavestory next time you post.

Celestial Tea co-founder John Hay, purchased the cave in 1983 when the nuclear war between the US and USSR began. He, like all of us pretty much do, thought living in a cave would be the perfect doomsday shelter. Hay purchased the 240-acre spread for $146,000 in 1983 and has reportedly spent 2 million to convert the cave into a full-on fallout shelter. He did a pretty great job if you ask me. Look at all that woodwork!

Hay sold the property in 1987 to a man known only as, “Mr. Richardson”, in which he converted the bomb shelter into a nightclub. And like every rich person buying a cave for a nightclub (that happens, right?), Richardson added a helipad for VIP guests. Updated in 2007, and then again in 2014, the 5,800 square foot cave currently has four ‘luxury’ bedrooms and four bathrooms. All rooms have natural rock formations, as most of the cave was preserved during the remodeling and construction. Can we just talk about the fact that there is an upstairs?

So, though it is a cave, the high ceiling and large open spaces kind of make the home…well, homey. It is completely remodeled with contemporary furnishings with a state of the art kitchen, high-end gas appliance, and double convection ovens. The property also has access to activities such as canoeing, fishing, and helicopter rides and includes a horse stable and barn with an apartment. Because you know, who doesn’t need one? The Lodge was voted top 10 most unique places to stay in the world, right up there next to the underwater ocean lab converted into a lodge. Yes, that’s a thing, you actually have to scuba dive down to it! That’s another listing though, so we’ll tell you about that next Friday!

And in case you don’t want to buy the whole cave, you can stay there as a visitor and rent it out for a few days. Price is $1,200 a night in low season and $1,600 a night in high season. The Beckham Creek Cave is usually used for company retreats, weddings, family reunion, or couples traveling together. What do you say? Are you ready to live out your dreams of becoming Batman?

Watch: Tiny Houses You Wish You Could Live In