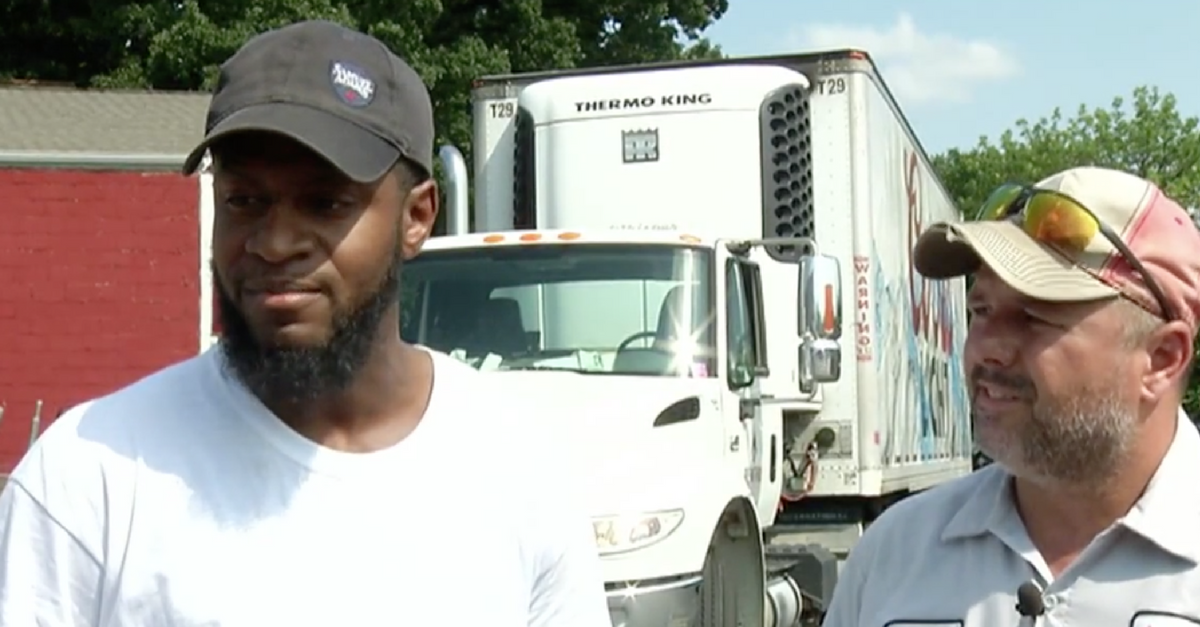 Two beer truck drivers, Jason Gaebel and Kwame Anderson, were driving their truck Wednesday morning in St. Paul, Minnesota, on the Earl Street Bridge over Interstate 95, when they spotted a suicidal man hanging off the fence of the bridge, ready to end it all.

Gaebel, who was driving, stopped the truck and Anderson, who was in the passenger seat, immediately hopped out and approached the man.

According to TwinCities.com, Anderson immediately figured out what was going on and engaged the man.

“Hey, what are you doing?” Anderson asked. “If you’re thinking of jumping, you don’t have to jump.”
The man at first, however, did not believe Anderson truly cared.

“You don’t know me, you don’t care. Why are you trying to save me?” the 29-year-old recalled saying when interviewed later.

Anderson assured the man that he did care, and if he did not he wouldn’t have gotten out of the car.
Being an apparent genius and badass as well as an obviously good person, Anderson decided to implement tactics he learned from watching Denzel Washington play a police hostage negotiator in the Spike Lee film Inside Man. Based on what he saw in the film, Anderson knew he had to create a rapport with the man.

That probably wasn’t too difficult (although certainly harrowing nonetheless) for Anderson, who is also a standup comedian.

Anderson quickly learned the man’s name and that he was from Chicago. Anderson assured him that he’d had a tough life as well, and he knew where the man was coming from.

Finally, Anderson pulled the ultimate “Life is worth living” card. He offered the man a beer. Anderson ran back to the beer truck, pulled out a pack of Coors Light, and told the man to come off the bridge so he could have one.

Finally, the man on the bridge agreed, and he inched his way back off the ledge.

Unfortunately but I guess understandably the man was not able to have a beer right at that moment, as the EMTs and police who’d already arrived insisted he be taken to the hospital for evaluation first. Which, fine, but also, booooooooo.

Anderson said he hopes to reconnect with the man as soon as he can, and invite him out to one of his stand-up shows.

St. Paul police credited both Anderson and the offer of beer with saving a life that day. Anderson’s co-worker Gaebel, who said he was not a religious man, also credits divine intervention. Why?
That morning the pair were taking a route they do not normally take.

If you or someone you know needs help, the National Suicide Prevention Lifeline number is 800-273-TALK (8255). Or visit Save.org or additional information.

Watch: The 6 Best Beer Towns in the U.S. for a Relaxing Beercation