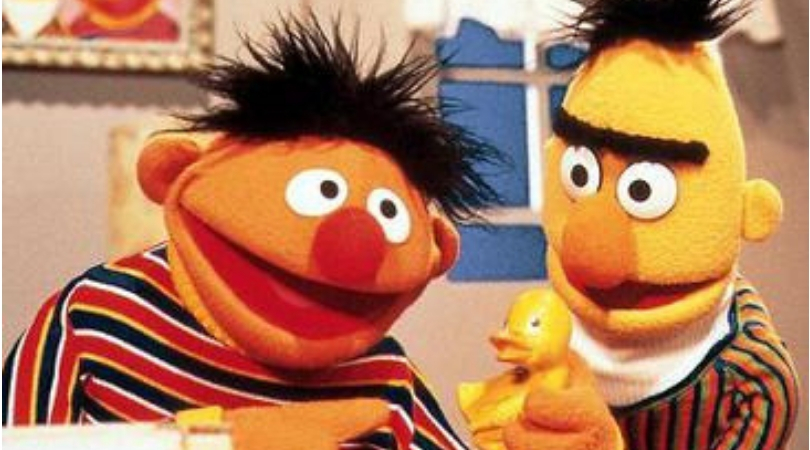 It?s a bright day for Sesame Street fans after one of the writers finally “confirmed” what fans have suspected for years. The world’s most beloved puppet roommates, Bert and Ernie, are apparently more than friends. Yes, according to an interview with former Sesame Street writer Mark Saltzman by LGBTQ lifestyle website Queerty, he wrote Bert & Ernie keeping in mind they were a gay couple.

The two puppets have been living together as roommates at 123 Sesame Street for the past 49 years but slept in separate beds. Bert and Ernie have been considered icons in the LGBTQ community for years, but Saltzman stated he didn?t write their same-sex relationship with an agenda, rather drew from his experiences. He based the characters on his real-life relationship with acclaimed editor Arnold Glassman.

The creator, who joined the show in 1984, stated he didn?t know how else to write them but as a loving couple, basing sketches on his partner’s life experiences, such as his OCD. The sketches would create friction with how chaotic he was, giving a Bert & Ernie dynamic, becoming analogs for his relationship. For example, things that would tick Arnie, his partner, would be things that ticked off Bert.

This isn’t the first time Bern and Ernie’s relationship has been questioned. In fact, several creators and writer have denied the relationship throughout the years. In 1994, Gary Knell, Sesame Street Workshop head denied the rumors, saying there were not gay or straight, rather just simple puppets, stating, ?they don?t exist below the waist.? That’s not harsh at all (insert sad emoji face here).

In 2011, producers also released a statement through Facebook saying Bert and Ernie were just ?best friends? and don’t have a sexual orientation. These characters were created to teach preschoolers that people can be good friends with those who are very different from themselves. Now, the Sesame Workshop also doubled down on Tuesday after Saltzman’s interview, releasing a similar statement through Twitter.

?Even though they are identified as male characters and possess many human traits and characteristics (as most Sesame Street Muppets do), they remain puppets, and do not have a sexual orientation.?

Please see our statement below regarding Bert and Ernie. pic.twitter.com/6r2j0XrKYu

This was not the only news this week involving Sesame Street, after pampers made headlines due to rumors stating they were going to get rid of Sesame Street diapers. According to outlets, parents have been complaining about the characters shown on the products, due to them coming off as “too masculine” and the products did not appeal equally to young girls and boys.

Procter & Gamble, the diaper brand’s parent company, replied to the allegations, saying the characters of their Pamper Baby Dry diapers always displayed a range of characters, male and female. Some of these characters include Zoe, Cookie Monster, Elmo, Rosita, Big Bird, and Oscar.

We want to assure you that you can still do this! We still feature Sesame Street on our Baby Dry diapers. We also wanted to offer a variety of prints to parents who are looking for a choice in graphics. They will be able to find these in Cruisers and Swaddlers.

On September 18th, Pampers’ verified Twitter account said they will still feature the characters on the diapers and will offer a variety of new prints with colorful graphics so parents can continue to trust the same Pampers protection they love.