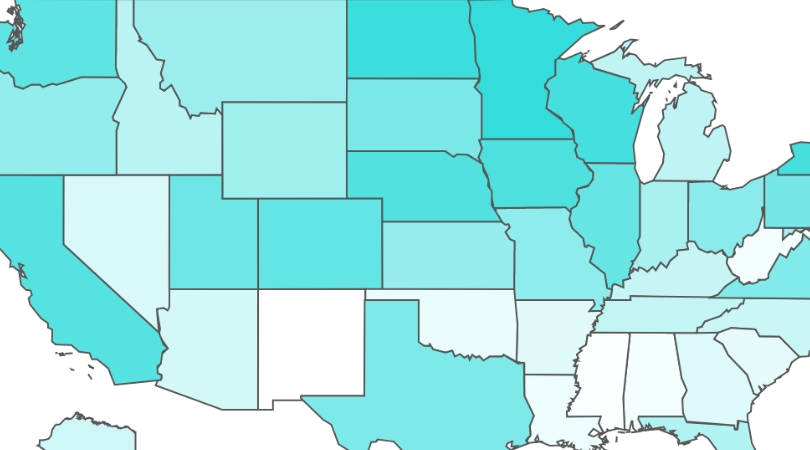 The numbers are in! Wallethub has released a list of the best and worst states in the United States to raise a family in 2018. Sometimes, as parents, we are forced to move whether it’s because of a career transition, due to a financial challenge or due to wanting a better school for our children. There are many factors to consider when moving out of a state, such as community diversity and cost to name a few. Wallethub released a survey of which states offer “the best combination of qualities that matter most to parents and children.”

For the survey, the personal finance website ranked each state using the accumulation of factors including unemployment rate, child care cost, family salary, infant mortality rate and affordable housing. They also calculated a total score based on the rankings which are based on metrics such as quality of local public schools and the quality of school systems, high school graduation rate, housing cost, healthcare cost, number of playgrounds and other attractions, and crime rate. The dataset ranged from median household income to unemployment rate, to housing affordability in the United States.

Overall, the study showed that the top five states to raise a family, starting 1 to 5, are Massachusetts, Minnesota, New Hampshire, North Dakota and Vermont. Massachusetts ranked at the top of the list for reasons such as great child care, education and it is ultimately affordability. The city also has the lowest infant mortality rates and is considered the healthiest state to live in. This year, Massachusetts was also recognized for having the best schools in the country. Go Massachusetts, you’re surely doing something right!

In second place, it’s no surprise it was Minnesota, due to it having the highest median family income. The state also has one of the lowest divorce rates and percentage of families in poverty. As for health and safety, no need to worry about that, since it is high up in numbers, as well as socio-economic.

New Hampshire, which was in first place last year, was placed in fourth this year in five dimensions: education, health, and safety, childcare, socio-economic, and affordability. The Northern state also has the lowest percentage of families in poverty, infant mortality rate and fewest violent crimes per capita rates.

North Dakota is the fourth state, placing high in median family salary, affordable housing, a lower percent of families in poverty, and lower divorce rates. The state also takes two of the highest five dimensions, which is education and childcare and socio-economic.

Lucky number five in the best states to live in is Vermont. The state has one of the lowest infant mortality rates, fewest violent crime per capita rates, and took the top spot for in the Health and Safety dimension. Which, is no surprise since the State was named the third healthiest state of 2017, by the United Health Foundation.

New Hampshire's economy has surged ahead of the other New England states in 2017. Going forward we will continue to make sure the Granite State is the best state to live, work, and raise a family #603Pride https://t.co/Jwdl5qwJL8 pic.twitter.com/VOzxqOHBQw

Now, I have to admit, the top five worst states to raise a family was a bit shocking to me. Starting at 46 and ending with 50, the states are Louisiana, West Virginia, Alabama, Mississippi, and New Mexico. Louisiana ranked poorly in four areas in total, having on the highest infant mortality rates, most violent crime rates per capita, highest divorce rates, and the highest percentage of families in poverty. The Shreveport Times also scored Louisiana low in affordability and education, meaning low graduation rates. But, there is still some good news for the state, due to it having the second lowest child care cost of all 50 states, so, it’s not entirely bad if you ask me.

Alabama landed in 48th place after it had one of the highest percentages of families in poverty and one of the highest infant mortality rates of all 50 states. Just like Louisiana, it also has one of the lowest childcare costs, showing us out of something bad comes something good. Last year, according to CNBC, Alabama was the worst place to live in, due to its quality of life score.

WalletHub survey ranks West Virginia at No. 47th in the best and worst states to raise a familyhttps://t.co/a8OIEeKjtI

Mississippi finds itself at 49 with the highest percentage of families living in poverty, and one of the highest divorce rates, as well as infant mortality rate. The state does have the lowest childcare cost for families, so if it’s affordability you are looking for, that might be your choice.

Last but not least, for the second year in a row, WalletHub ranked New Mexico as the worst state to raise a family. Last year, the state ranked amongst the lowered due to affordable and education (when it came to graduation rates) and child care cost. This year, the pattern doesn’t really shift, but the study also shows New Mexico has one of the most violent crimes per capita rate, one of the highest childcare costs, and highest percentage of families in poverty in the United States.

Check out the full list here to see where your state stands!