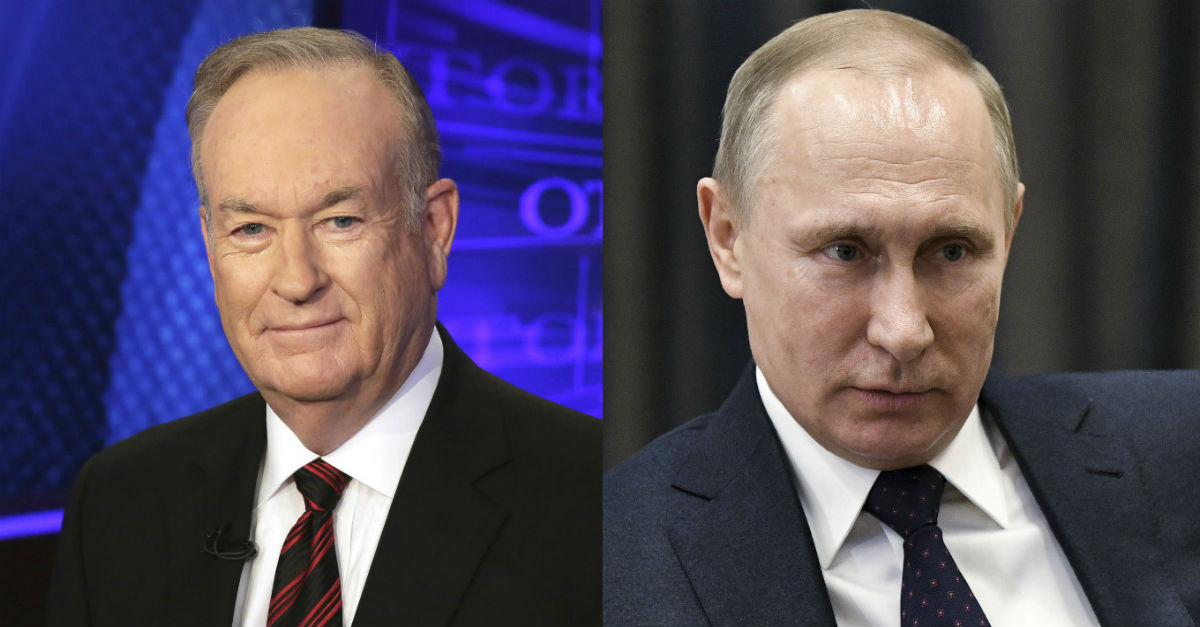 AP Photo/Richard Drew; Alexei Nikolsky, Sputnik, Kremlin Pool Photo via AP
FILE - In this Oct. 1, 2015 file photo, Bill O'Reilly of the Fox News Channel program "The O'Reilly Factor," poses for photos in New York. O'Reilly responded on his show Tuesday, July 26, 2016, to first lady Michelle Obama's remarks during her speech at the Democratic National Convention Monday that she wakes up "every morning in a house that was built by slaves." O'Reilly said the slaves who helped build the White House "were well-fed and had decent lodgings provided by the government." (AP Photo/Richard Drew, File); Russian President Vladimir Putin listens during a meeting in Moscow, Russia, Monday, Feb. 6, 2017. The Kremlin is indignant over the comments of a Fox News journalist who called Russian President Vladimir Putin a "killer" in an interview with President Donald Trump. (Alexei Nikolsky, Sputnik, Kremlin Pool Photo via AP)

In new clips from an interview taped with Donald Trump and aired on the O’Reilly Factor, Bill O’Reilly revealed new insight from Trump on immigration, sanctuary cities, and former president Obama. He aired additional footage from Trump’s answers on Russia, the Iran Deal, and California.

RELATED: White House releases the list of terror attacks they feel were not properly covered by the media

But first came an update on an item that developed as the day went on: Russia had contacted Fox News after Sunday’s segment and demanded on an apology after the host called Russian President Vladamir Putin a “killer.”

“We consider such words like that coming from the Fox  TV company to be unacceptable and insulting, and we would prefer to get an apology from such a respected TV company,” said a Russian spokesman.

“I’m working on the apology,” he said, jokingly, before noting that he “might need a little time” and suggesting an apology would come in “2023.”

Then, the host moved on to the segments he wanted to air. They began with Trump’s position on the Iran deal, which he touched in the Sunday portion of the show.

“The deal should’ve never been negotiated, there was no reason to do it,” he said. “We have the worst of everything.” He slammed the amount of money Iran received as part of the conditions of the Iran deal, and says sanctions are “on the table.” As far as military action on Iran, don’t expect a word until after the fact. Trump has made his contrast with former president Obama clear on this issue: don’t expect anything in advance.

After airing a re-run of comments on Mexico and California’s “sanctuary state” idea, they moved onto Kate’s Law. O’Reilly asked Trump why he thought Democrats opposed the law, since it was “so logical.”

They closed tonight’s segment with questions about Donald Trump’s relationship with Barack Obama. O’Reilly asked if the pair were as friendly on Inauguration Day as they seemed to be. Trumps says the two are friendly: “We get along, I don’t know if he’ll admit it, but he likes me.”

The president went on to say that though the pair had said “horrible things” about each other on the campaign trail, “now we don’t talk about it […] politics are amazing.”