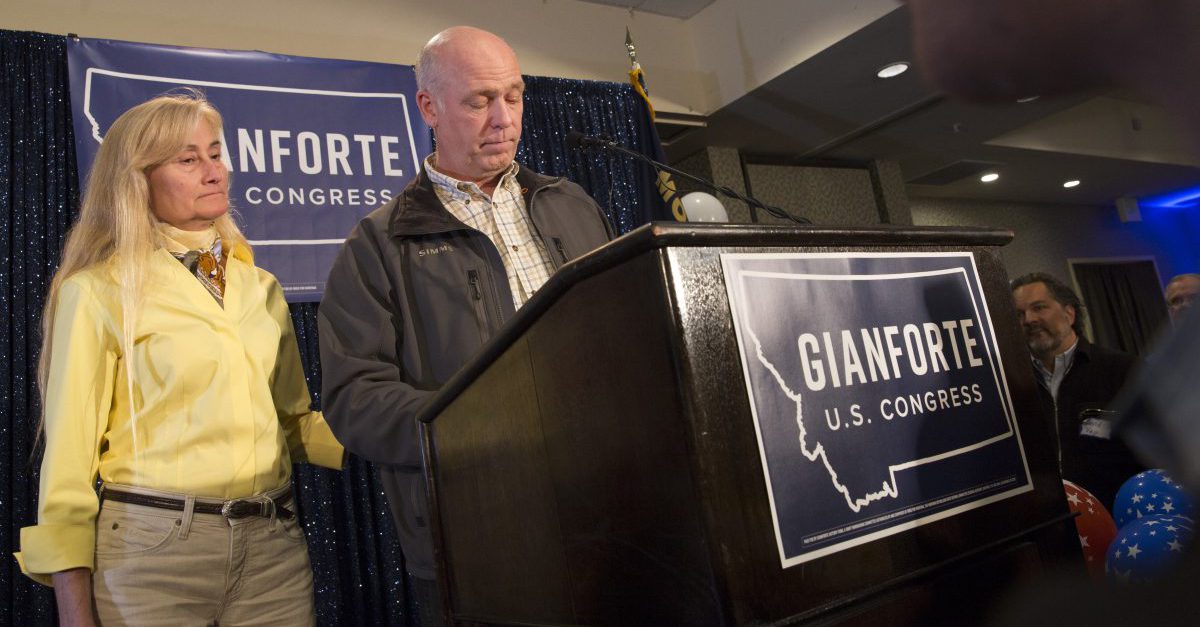 Janie Osborne/Getty Images
BOZEMAN, MT - MAY 25: Republican Greg Gianforte speaks to supporters after being declared the winner at a election night party for Montana's special House election against Democrat Rob Quist at the Hilton Garden Inn on May 25, 2017 in Bozeman, Montana. Gianforte won one day after being charged for assaulting a reporter. The House seat was left open when Montana House Representative Ryan Zinke was appointed Secretary of Interior by President Trump. (Photo by Janie Osborne/Getty Images)

Montana Republican and Congressman-elect Greg Gianforte has plead guilty to assaulting Guardian reporter Ben Jacobs in a May 24 incident that Jacobs recorded and released.

A Montana judge sentenced Gianforte to 40 hours of community service, a fine of $385 and 20 hours of anger management sessions. While Gianforte’s misdemeanor assault charge can carry jail time, Judge Rick West said that “did not want the congressman-elect to go to jail.”

Judge West initially considered sentencing Gianforte to four days in jail, but declined, noting that Gianforte was eligible for a work program that would keep him out of jail and grant him community service instead.

Judge West also “repeatedly” asked Gianforte if he believed he’d caused injury to Jacobs, according to The Guardian, which Gianforte admitted to.

“Although it was not my intention to hurt him, I understand Ben was injured,” Congressman-elect Gianforte said.

RELATED: “Body-slamming” a reporter just made Greg Gianforte a whole lot of money

Since the incident, Gianforte has apologized to Jacobs and pledged to donate $50,000 to the Committee to Protect Journalists, a nonprofit that says it works to protect press freedoms and the rights of journalists.

BREAKING: West gives Gianforte 4 days in jail, but he is eligible for the jail work program and will spend two days working instead. #mtpol

That’s according to Whitney Bermes, a court reporter for Montana’s Bozeman Chronicle.

The apology, charges and subsequent sentencing are contrary to comments from Gianforte’s team in the immediate aftermath of the incident.

A statement from Gianforte campaign spokesman Shane Scanlon picked up by Fox News attempted to paint the incident as Jacobs’ fault. In part, Scanlon’s statement reads:

After asking Jacobs to lower the recorder, Jacobs declined. Greg then attempted to grab the phone that was pushed in his face. Jacobs grabbed Greg’s wrist, and spun away from Greg, pushing them both to the ground. It’s unfortunate that this aggressive behavior from a liberal journalist created this scene at our campaign volunteer BBQ.

A statement issued by the Democratic Congressional Campaign Committee in the wake of his plea has called for Gianforte to step down before taking the oath of office, calling him “unfit and unworthy of the honor of representing Montana in Congress.”

Simple: Greg @Gianforte should not be sworn in. Full statement below: #MTpol pic.twitter.com/OLhdpPnmTX