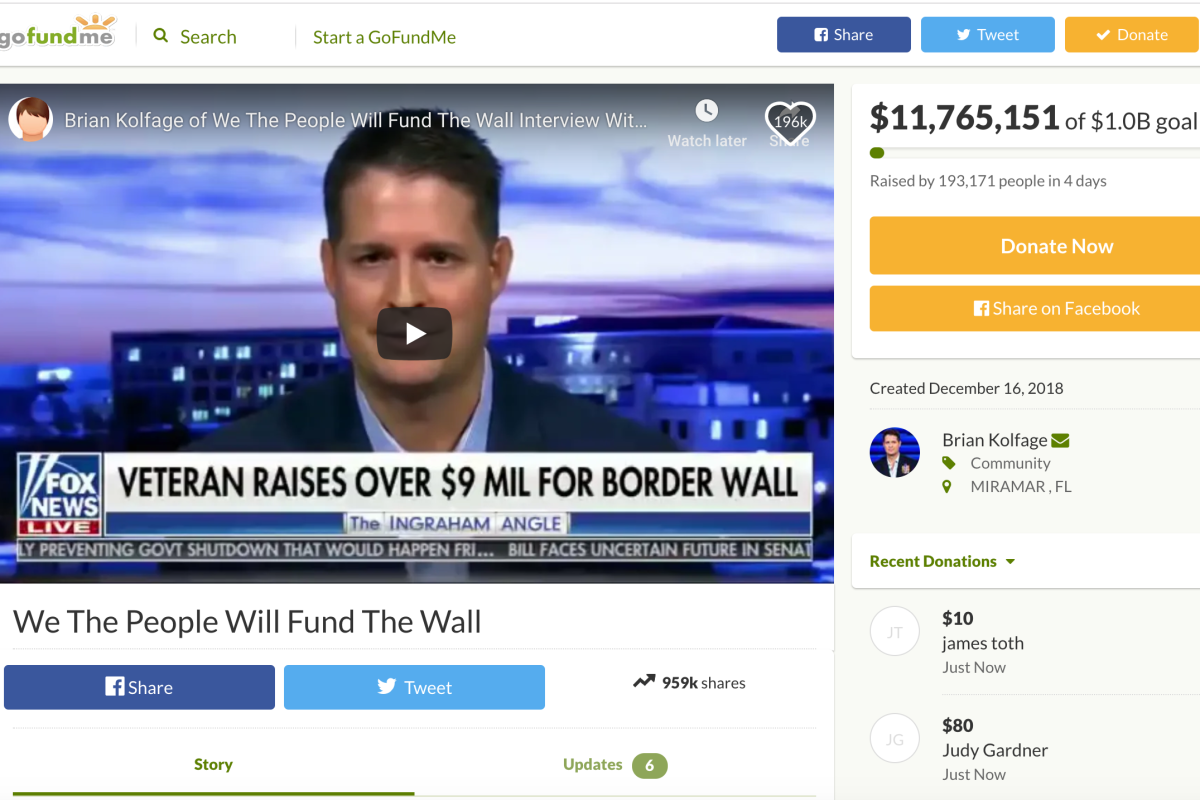 Who needs to go through all the jargon of bureaucratic red tape when you could raise all the money you need for a specific government project via the internet and kind strangers? That’s exactly what one Florida man took into his own hands this week, asking the internet for 1 billion dollars to build the border wall between the United States and Mexico.

Brian Kolfage is a purple heart recipient, a retired United States Air Force member, and a triple amputee veteran from his tour in Iraq. He voted for Trump to Make America Great Again, which included President Trump’s main campaign promise to build the wall. Now, the government is at a standstill, and with the funds not easily accessible (because you know, checks and balances), Brian decided to take to GoFundMe to raise 1 billion dollars to donate to the American government to construct the wall. As of today, December 21st, people have raised over $11 million dollars, roughly 11% of what Brian is asking. And only 1.1% of what it might cost to construct the wall. In the past President Donald Trump has estimated that the wall would take $25 billion to construct.

I have to commend Veteran Brian Kolfage for starting this GoFundMe campaign, but there are still a lot of questions that have to be answered, especially since the company just went through a public fraud claim just a few months ago when a New Jersey couple conned $400,000 out of generous donors raising money for a homeless man.

The GoFundMe page, which is called, “We The People Will Fund The Wall,” answers a few questions weary donors may have about the money and where it will go. Brian assures that the government has accepted large donations before, most recently a billionaire donated $7.5 million to fund half of the Washington Monument repairs.

Getting down to the nitty-gritty, while it is admirable that the GoFundMe campaign has already raised millions of dollars, the rate at which it is growing would take 571 days to reach the goal to fund Trump’s border wall according to Snopes.

The Air Force Veteran states that he has been talking to the Trump Administration to ensure all funds will go towards the border wall. If the goal is not met, he promises to refund all of the money.

The White House has not yet commented on the funding page for the Trump wall along the US-Mexico border.