Child Dies After Bounce House is Blown Into Power Lines 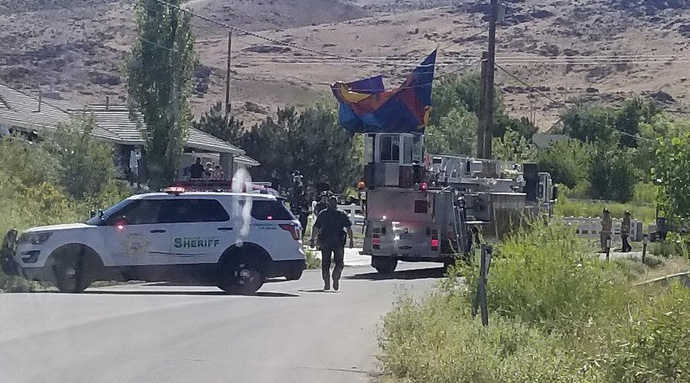 A 9-year-old Reno girl has died from injuries she suffered when strong winds blew an inflatable bounce house with three children inside into power lines last weekend.

The family of Elizabeth “Lizzy” Hammond issued a statement Friday confirming her death from the incident last Sunday, and thanking first-responders and law enforcement for their help and support.

The Reno Gazette Journal reported law officers and emergency personnel were among the hundreds of people who lined the hallways of Renown Regional Medical Center Friday when Hammond’s family donated her organs for transplants during an honor walk.

The Washoe County Sheriff’s Office says the bounce house was uplifted about 10 feet (3 meters) and got caught on the lines in a south Reno neighborhood.

Deputies and firefighters rescued the children. They treated two for minor injuries at the scene and transported Hammond to the hospital, where she had been since Sunday.

Emergency crews responding to the accident directed NV Energy to turn off power in the area, leading to a power outage for about 3,000 customers for about two hours. No other details have been released.

Washoe County Sheriff’s spokesman Bob Harmon told The Associated Press on Friday the accident remains under investigation but that he had no new information to report. Authorities told KOLO-TV the bounce house seemed to be secured to the ground but was caught by an especially strong gust of wind.

“We are truly heartbroken for the family,” he said in a statement. “I speak on behalf of every deputy, firefighter, trooper, dispatcher, and medic who responded to this incident as well as all area first responders when I say to the family ‘our prayers are with you, our thoughts are with you and we are here to help in any way that we can.’ ”

Hammond’s family said dozens of children would benefit from the donation of her organs. “We believe that her beautiful spirit will carry on within those individuals that she helps,” they said.

Her family said she was an active volunteer in the local community who helped feed the homeless, built care packages for local soldiers deployed overseas and provided school supplies for less-fortunate children.

“Lizzy loves all first responders,” the family said in the statement. “She was extremely patriotic and wholeheartedly supported the U.S. military, as well as her local police, sheriff and fire departments. She was a warm, kind, and selfless girl who loved everything and everyone.”

Watch: Turn Your Backyard into a Waterpark with This 75-Foot Water Slide