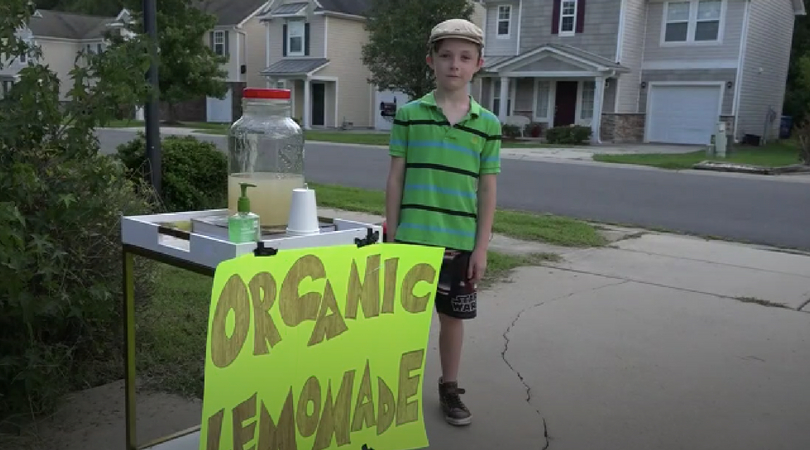 An especially entrepreneurial 9-year-old North Carolina boy was working a lemonade stand in Union City, in order to save up enough money to buy a new lawnmower for his other business when, while making change for someone he thought was a customer, he was robbed of all his earnings at gunpoint.

I mean, c’mon, Lemonade Stand Bandit, no one needs meth that badly. I don’t like to break Godwin’s Law but you, sir, are worse than Hitler. Stabbing a Salvation Army Santa Claus and taking his bucket of change is more acceptable than robbing a 9-year-old boy’s lemonade stand. How can you look at that rickety wood table, with its posterboard sign, and then decide that is where you’re going to commit armed robbery?

I mean, damn. Just knock off an animal shelter or something.

The boy, named Mark, says that while he was making change for the robber, North Carolina’s worst human caught a glimpse of how much money was in Mark’s tin, snatched it, then showed Mark a gun stashed in his waistband and ran off. The Union County Sheriff’s Office later found a camouflage hat, what turned out to be a BB gun, and a stolen metal tin in some nearby woods not far from Mark’s house. Clearly, the Danny Ocean of robbing children had an escape route in mind from the start.

Mark’s father Phillip made the most obvious statement of the day when told NBC Charlotte that he was shocked someone would rob a little boy’s lemonade stand.

But all’s well that ends well, and thankfully this story has a happy ending. After hearing about Mark’s brush with danger a nearby Lowes donated a big, badass riding lawnmower to Mark so he could continue to pursue his lawnmowing business. A quick perusal of Lowes’ website shows that the average price of a riding mower is over a thousand dollars, so it feels like Mark came out ahead here. Wait. Could this be an inside job?* Cui Bono Mark! CUI BONO!

*It is probably not an inside job.

If anyone Grand Theft Auto’s this kid’s riding mower vigilante justice will be authorized.*

*Vigilante justice will not actually be authorized.

This story was originally published August 7, 2018.