Bridezilla Cancels Wedding After Guests Refuse To Pay $1,500 Each 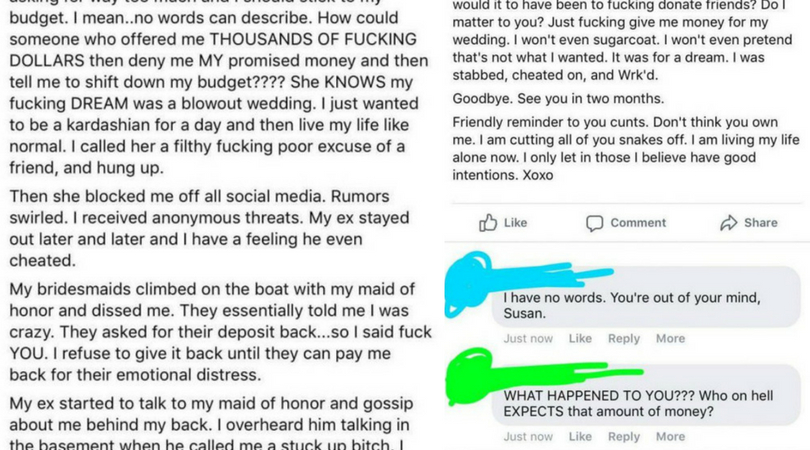 Bridezillas. Everyone’s worst nightmare, because let’s face it, there is nothing worse than a terrible bride who bosses their guests and wedding party around. Now, imagine a bride that forces her guest to give the couple $1,000 to attend the “once in a lifetime” wedding, only to cancel when realizing that, well, not everyone has $1,000 lying around.

Yes, this is actually a true story. A woman’s petty Facebook post has gone viral, blaming her friends and family for canceling her $60,000 dream wedding. (She totally didn’t read our article, btw.) The story has received a massive response on Twitter and Facebook, capturing attention worldwide. To make this long story short, the post explained that she called off her wedding, dumped her ex-fiancé, and was planning to delete her Facebook account and backpack around South America for two months to get away from all the “toxic energy.” But of course this story is too good to just be a “short story”, so brace yourself, because you’re about to read a mini-novel. Grab that popcorn!

If you have a solid 10 mins to absorb this, I present a very real status shared in a wedding shaming group I'm a part of

The post, which was shared by the woman’s cousin on Twitter, starts off by saying that the bride, who has been identified as Susan from Canada, has broken up with her fiancé and canceled the wedding 4 days beforehand. She goes on to explain how due to “recent and irreparable problems”, by problems she means friend and family not paying them money, have ruined their marriage and ultimately, their life.

The couple managed to save up $15,000 for the wedding since their love was like a “fairy tale,” and they wanted an extravagant blowout event. When the two started touring venues, they were torn between two, but the couple went to a local psychic in which she told them to go with the more expensive option. I quote, “A local psychic told us to go with the more expensive option, and we thought why the hell not?” So, they did what any couple in love will do. Stack up their debt and pay for that venue, spending that 60K, and even paying for some flights to Aruba. (If that’s not a red flag, I don’t know what it, but sure, let’s go on.)

Of course, it doesn’t end there. She goes on during her foul-mouthed rant, saying that this is where her friends and family need to help them to cover their expenses because overall, they were their wedding guests. Okay, Susan, you’re just causing my eyes to hurt a little bit from all the rolling here. If you can’t afford a $15,000 wedding, what makes you think you can afford a $60,000 wedding? (Insert ‘I don’t know’ emoji here.)

The 17-paragraph, let’s call it an outburst, said the pair had “specifically asked for cash gifts” from all their guests. The bride explains how she had “made it CLEAR” if you couldn’t contribute to the wedding, well, you were banished from it all! GOOD DAY, SIR. Much to their dismay, the bride and her fiancé quickly realized that (of course) people weren’t willing to pay that $1,000 to attend the wedding. Only 8 people replied to their RSVPs and actually sent them checks. Which props to them by the way, I hope they got their money back.

The couple also created a GoFundme page, in which they gathered $250. But wait, it doesn’t end there. Her fiancé, who someone realized that this whole thing was delirious, suggested the couple get married in Vegas to save money. The bride’s response? “

“He wanted those cheap, raggedy, filthy, whore like Vegas weddings,” she wrote. “Am I some Hooch piece of f—ing trash, a hooker? My ex left the room and didn’t apologize for his horrid suggestion.”

Wow Susan, wow. Let the man live, Susan. He’s just trying to marry you, despite you being a psycho, Susan.

The psycho, I mean ex-bride, wrote how she took her frustrations on her Maid of Honor who had promised her $5,000 before ultimately backing out. In which, made things even crazier, calling her MAID OF HONOR, a filthy f-ing poor excuse of a friend.

“How could someone who offered me THOUSANDS OF F—ING DOLLARS then deny me MY promised money and then tell me to shift down my budget???? She KNOWS my f—ing DREAM was a blowout wedding. I just wanted to be a Kardashian for a day and then live my life like normal. I called her a filthy f—ing poor excuse of a friend.”

I mean, I don’t know, I might be wrong but, I’m pretty sure the Kardashians would be pretty disappointed in your actions, Susan. Even they wouldn’t act like this. It’s unseemly and selfish, and that’s not how you treat people, sweetie. Several individuals have commented on the post, shocked at their bride’s actions, calling the outrageous expectation embarrassing. The post has even gathered attention from local media and celebrities. Yes, queue in Chrissy Teigen.

So, would you pay those $1,500? What a truly incredible tale, dream wedding for sure.

* You must pay $1500 or more to attend our exclusive and once in a lifetime wedding *
Me: pic.twitter.com/VWCFErvUP9

All her friends. Also-is she just leaving her child for two months while she recovers from her self imposed drama? pic.twitter.com/tDiItMNaLR

me reading through this pic.twitter.com/3zyFMHNp66

Watch: The World’s Hottest Pepper Can Kill You