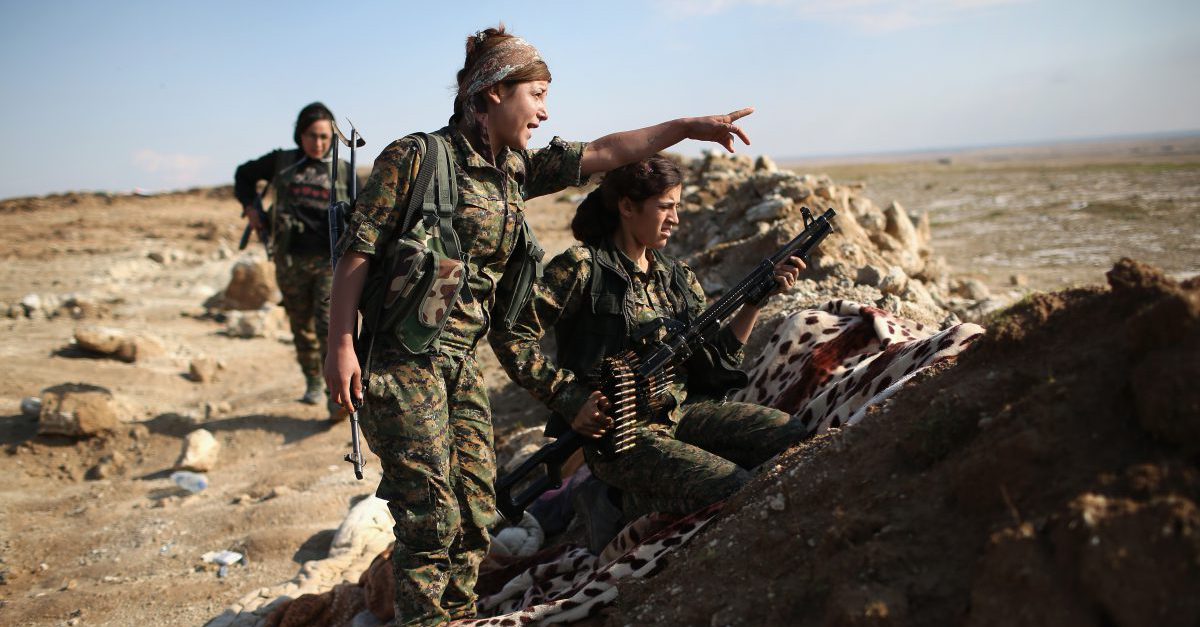 John Moore/Getty Images
HOLE, SYRIA - NOVEMBER 10: Female Troops from the Syrian Democratic Forces take up positions near the frontline on November 10, 2015 near the ISIL-held town of Hole in the autonomous region of Rojava, Syria. The forces, a coalition of Kurdish and Arab units, are attacking ISIL extremists in the area near the Iraqi border. The predominantly Kurdish region of Rojava in northern Syria has become a bulwark against the Islamic State. Their mostly Kurdish armed forces, with the aid of U.S. airstrikes and weapons, have been battling ISIL, who had earlier captured much of the region from the Syrian regime. (Photo by John Moore/Getty Images)

In a release published just hours ago, the Department of Justice announced the indictment of Rasheed Al Jijakli, a naturalized American, on charges that he smuggled “rifle scopes, laser boresighters, flashlights, bulletproof vests, and other tactical equipment” to Syria.

He is reportedly the CEO of a check-cashing business in Orange County, California.

The Department of Justice does not state which Syrian groups were the intended recipients.

RELATED: A Marine who secretly returned to the Syrian battlefield to fight ISIS has died

Al Jijakli is alleged to have worked with three others to transport the items by hand. Starting in Istanbul, Turkey, the group is said to have purchased and carried the items ? which are forbidden for export to Syria under American law ? over the border.

The Department of Justice statement clarifies that Al Jijakli has been charged with violations of the International Emergency Economic Powers Act (IEEPA):

In accordance with [IEEPA] authority, the President issued an executive order that included broad restrictions on exports to Syria. The U.S. Department of Commerce subsequently issued corresponding regulations restricting exports to Syria of items subject to the Export Administration Regulations.

If convicted on all counts, he could see a maximum sentence of fifty years in prison.