California wildfire devastates trailer park “in the blink of an eye” 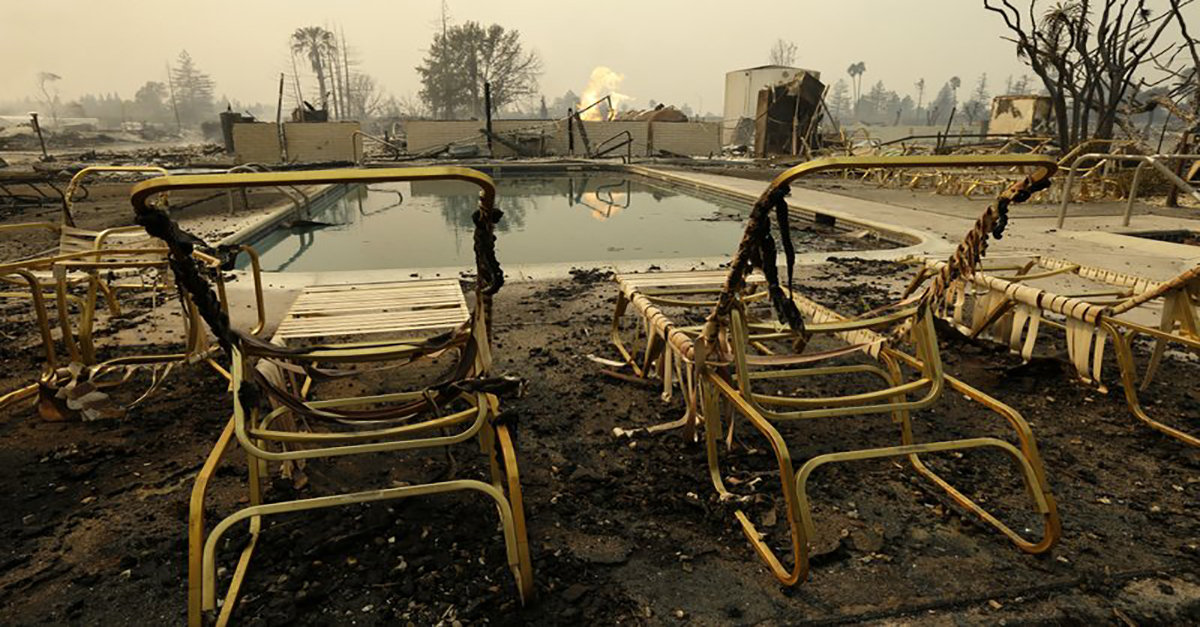 Nancy Cook’s dogs sounded the alarm in the middle of the night and she looked out the window to see the flames about a mile away. She never thought they’d reach the Journey’s End trailer park she called home.

But like many who made a pre-dawn dash for their lives in California’s wine country Monday, Cook discovered how fast a wind-driven inferno could arrive at the door.

“My husband and I both thought it wouldn’t get here,” Cook said. “It was way, way back there. A big gust of wind just sent it flying. … Just literally in the blink of an eye.”

By daybreak nearly all of the roughly 160 units in the park for residents over age 55 were reduced to ash and charred, melted metal as flames continued to sprout from gas lines. The homes next to U.S. Highway 101 at the northern end of this city of 175,000 were among more than 1,000 that were consumed by flames as more than a dozen fires burned statewide.

The wildfire stampeded into the city while people were sleeping, torching fast-food businesses, a Hilton hotel and catching residents off guard and, in many cases, little time to escape with more than the clothes — or pajamas — on their backs.

They left behind beloved pet cats, wallets and a vintage collector’s car.

It was smoky when Linda Johnson went to bed around 11 p.m. When she woke up a few hours later, it was glowing red outside.

RELATED: Ash from western wildfires is so bad, it’s being compared to an infamous volcanic eruption

A landmark round red barn on the hill nearby was burning “like a torch, like a candle,” she said.

Embers from the barn were carried by the wind and rained down on the park’s evergreen and palm trees.

Flames leapt from the trees to one of the trailers and then the residents were in a race for their lives.

Johnson struggled to get her partner, Frank Bautista, a heavy sleeper, up and moving.

They were able to get out, but in their haste left behind a cat named River.

Charlie Brown said he woke up several neighbors after seeing the bright glow and helped a woman who used a walker get out of her home. He got in his van and drove around honking his horn before leaving.

He planned to return to retrieve his hotrod 1964 Ford Galaxie. But by the time he got back, fire had claimed the classic car.

“There’s nothing,” Brown said. “These things burn hot. It melted my car, blew the gas tank up.”

Cook also had scrambled to alert others. She and her husband, Jim, pounded on neighbors’ doors.

She struggled to get a 94-year-old man to abandon his pickup truck as flames from his burning house threatened to ignite the vehicle. She gave up as he insisted on taking the truck.

“I just figured all the time I’m wasting trying to stop him,” she said, and told herself: “‘Just let him go and hopefully he gets it out of there.’”

The man managed to escape. Firefighters and police officers who forced Cook to leave told her they had checked every unit and were confident everyone got out.

She managed to gather the couple’s dogs and medications, but couldn’t find two pet cats.

The Cooks then joined other residents at the parking garage of the Kaiser Permanente medical center next door, where they watched the Journey’s End park — and their homes — go up in smoke.

Visit the Associated Press for a photo series of the devastation.