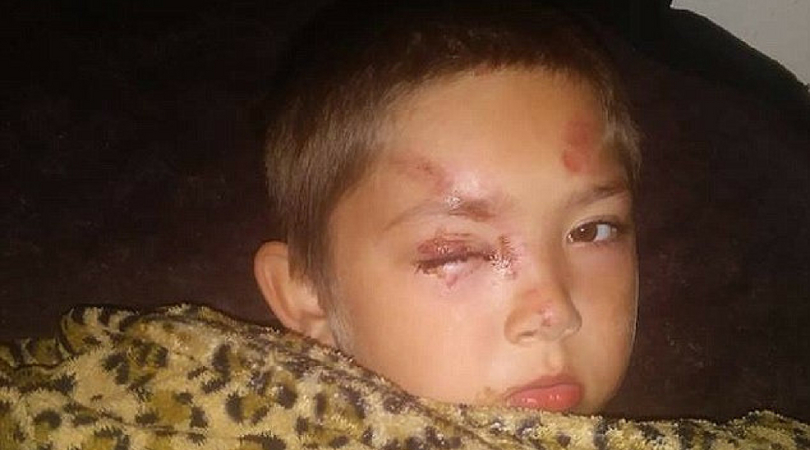 New light has come up in regards to 6-year-old Carter English’s case after the boy’s mother stated Carter was beaten up by young bullies. After the story went viral, detectives with the Olympia Police Departments began the investigation, developing information that the minor’s story wasn?t holding up and the injuries ?might not have been from the attack.? Detectives confirmed the suspicion on Thursday, August 30, 2018.

According to Olympia Police, the injuries were caused by a result of a fall which occurred at the family apartment complex. Authorities do not have a set date for when the incident occurred but did state there are no suspects of any age. The boy’s mother said she had initially found her son injured on her doorstep after a group of kids were bullying his friend and attacked him for defending him. She claimed the boy had sawdust rubbed in his eyes. The minor had to undergo several surgeries, which is why the family created a GoFundMe page for the boy, raising more than $45,000.

Authorities had identified a 5-year-old as a “primary aggressor” but didn?t file charged due to his age. After questioning, the officer went back to English, who admitted he made the story up. Investigators say no charged will be filed due to the boy’s age, but appropriate social service has been notified to ensure the safety and welfare of the child involved.

A 6-year-old boy from Olympia, Washington, was assaulted after he stood up to a group of kids who were bullying his friend. According to Dana English, when she went home during her lunch break on August 22, she saw her son Carter English, on the front steps of their home, bleeding and injured. Carter stated he was attacked by 7 kids around his age at their Olympia apartment complex. Carter was trying to defend his friend, but the kids turned on him by throwing rocks, hitting him with sticks, and rubbing sawdust in his eyes.

English immediately took him to the Harborview Medical Center, where doctors told the mother he had multiple hematomas on his forehead, a minor concussion, lacerations to his eyelid and eyeball, a fractured elbow, and a broken arm. Carter immediately underwent emergency surgery to pull beauty bark out of his eye, but doctors stated he is still at risk of losing his left eye and will need another surgery on his arm. On August 24, Carter was officially released.

“This bullying needs to stop.” Olympia mom says her 6-yr-old was beat up by several kids when he tried to stand up for a friend. He just got out of surgery where doctors sewed his eye back together. #komonews pic.twitter.com/HqBzDcBo4C

Olympia Police are now investigating the case and have identified a 5-year-old boy who they believe started the fight. The case was briefly presented to the prosecutor’s office, and officials are planning to get social services involved. Due to the age of the children involved, the case will not result in any criminal referral. Friends of the family have set up a GoFundme page for Carter to help the family with medical expenses, and have raised more than $13,000.