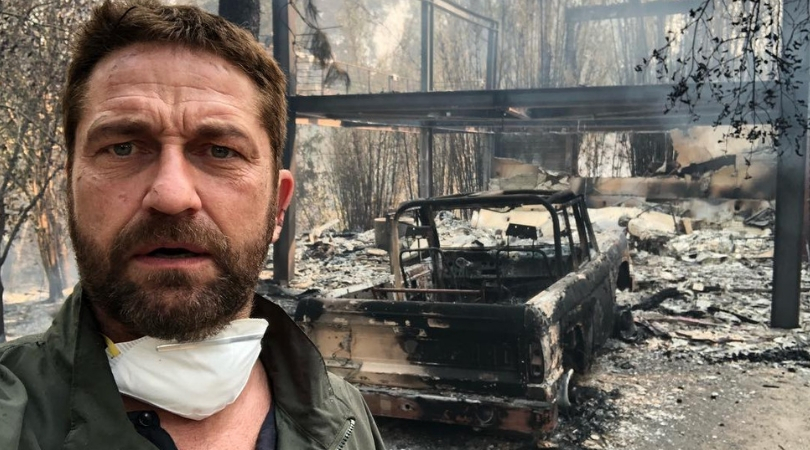 The Southern California wildfire has forced tens of thousands of people to flee their homes, including several celebrities who are using their voice to urge social media users to help any way they can. The most recent celebrity who tweeted about the fire was Miley Cyrus, known for her previous work with Disney Channel.

The singer took to Twitter to thank her followers and update them on her situation, saying she felt “grateful” for what remained. Cyrus said she was devastated by the fires affecting her area, but is one of the lucky ones. Her animals and the “love of her life” made it out safely. She stated, “My house no longer stands but the memories shared with family & friends stand strong. I am grateful for all I have left.” The 25-year-old then thanked first-time responders.”

all I have left. Sending so much love and gratitude to the firefighters and LA country Sheriff’s department! If you are interested in getting involved see next tweet….
Donate $ , Time , Supplies
I love you more than ever , Miley

Neil Young also took to Twitter to reveal he left his home to the wildfire. On his personal website, he criticized President Donald Trump’s tweet attribution to the fires to “bad forest management.” Neil stated California is vulnerable not because of poor forest management, rather because of Climate Change.

Gerard Butler called the situation “heartbreaking” as he stands next to his home, completely destroyed, showing its charred remains. The Woolsey fire started Thursday night and had pushed toward Malibu and the Pacific ocean by Friday, prompting an evacuation in Aurora Hills, Calabasas, Malibu and other nearby areas. The wild blaze was torched over 85,000 acres of Los Angeles and Ventura counties, claiming at least 150 homes.

According to authorities, the blaze virtually burned down the town of Paradise, destroying thousands of structures and homes. Over 228 people are unaccounted for and at least 31 people have died.

Returned to my house in Malibu after evacuating. Heartbreaking time across California. Inspired as ever by the courage, spirit and sacrifice of firefighters. Thank you @LosAngelesFireDepartment. If you can, support these brave men and women at SupportLAFD.org. Link in bio.

Our home is just to the left! Praying

Sadly my house couldn’t be saved. The courageous firefighters were able to save my cars and personal items recovered from my home. I thanked the fire chief and his team of firemen for all of their hard work. He took the time to explain what happened and I’m grateful for all of their hard work trying to save my home. Sad we lost our home but grateful that my family is safe. Luckily we quickly evacuated our house yesterday after a patrol car drove up the street announcing mandatory evacuations. I’m grateful for my lovely neighbors and friends who kept me informed and for their help this evening. 🙏 Thank you all for caring 💜 #woolseyfire #malibu. Special thanks to Fire Chief Rash and his brave team of firefighters. 🙏

this is my street as of two hours ago praying for the safety of all my malibu fam, grateful to our brave firefighters please stay safe 🙏🏼

Nearly all celebrities gave shout-outs to the firefighters struggling to contain the fire, that was described as difficult conditions. In addition to the homes destroyed, Paramount Ranch “Western Town,” a film location dating back to 1927 burned to the ground. The TV series “Westworld” is among the many products that filmed at the ranch in West Los Angeles.

Thank for your Twitter love. We are safe and sound (oversees), our animals were rescued and our house (barely) spared. The fire roared down the creek bed behind our house and missed it by a dozen yards! pic.twitter.com/pHkkqFHuIH

Getting ready for show.Such an Unreal experience. 🔥Fires across The St.From My House, Cant See Neighbors House Through The 🔥. & It’s All on
VIDEO 🙄

Praying for everyone in California affected by these terrible fires. We have been evacuated for almost 48hrs now and need the angels to keep surrounding our home. Thank you to the brave firefighters who have protected our home so far. 🙏🏻 pic.twitter.com/pG98LQMvLx

I heard the flames have hit our property at our home in Hidden Hills but now are more contained and have stopped at the moment. It doesn’t seems like it is getting worse right now, I just pray the winds are in our favor. God is good. I’m just praying everyone is safe 🙏🏼

Sad for fans of @WestworldHBO and shows like Dr Quinn Medicine Woman, the Paramount Ranch western town movie set has burned to the ground in the Woolsey Fire @CBSLA #westworld #Woolseyfire pic.twitter.com/DhZWaGbr6g