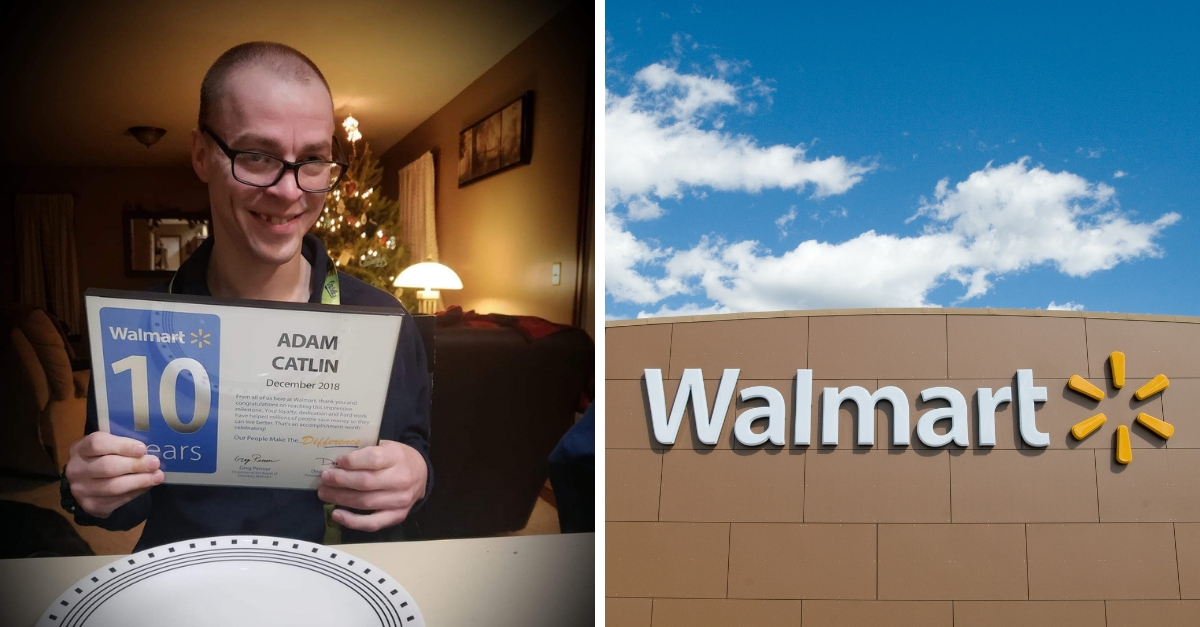 “Have a great day!” Adam smiles and waves, his Walmart badge beaming brightly against his blue shirt. Adam Catlin of Middleburg, Pennsylvania, has been a people greeter at his local Walmart for over ten years. However, he might have to hang up his name tag once and for all due to Walmart’s new greeter job requirements. Requirements he won’t be able to perform as a person with cerebral palsy.

In the middle of his shift, Adam was told that due to a change in Walmart’s corporate policy, the job description of “people greeter” would be changing to “customer host” and with it, employees under the role are required to lift 25 pounds, stand the entire shift, check receipts, and even assist customers with returns. Adam was heartbroken. “My favorite part of the job is meeting the people who come into shop and interacting with my co-workers,” he told Rare. “I feel like I was treated equally up until now. After this, I feel like they do not care about my disability or me.”

“It was a little bit of a shock. They just told me on Saturday. They called me into the manager’s office and said the job code was changing. They said I would have to lift 25 pounds, be able to walk a lot, extensive standing,” Adam shared with The Daily Item.

Adam has until April 26 to comply with the new company policies, otherwise he will be let go. A manager at the Selinsgrove Walmart told Newswatch 16 that he is unable to comment, however when reaching out to the corporate office, Walmart responded with,

“Over the last two years we’ve continue to expand this program and introduce more customer host roles in our stores, adding more responsibility and pay to the traditional People Greeter role. We’re committed to always providing our customers with a positive and safe shopping experience, and we know there isn’t a one-size-fits-all solution to staffing our entrances and serving customers. We look at the data from each store individually to structure the appropriate door coverage.As we have done in other locations where we’ve added Customer Hosts, our management team will continue to support our associates as they consider other open positions in the store and those in nearby locations.”

Cerebral Palsy affects approximately 500,000 Americans according to Cerebral Palsy Group. The developmental disorder occurs as a result of a sustained brain injury during fetal development and affects muscle control, fine motor skills, and coordination. Because of this, most people with CP rely on a walker or wheelchair to get around. When Adam applied to be a Greeter, using his walker and a chair were never a problem, however, the new job duties have made it clear that Adam is unable to perform all of the new requirements.

Is this ethical under the ADA?

According to Walmart’s latest CDI report, the company has received a marking of 100/100 on the 2017 Disability Equality Index. While it may seem unethical for a corporation like Walmart to pull the rug from under a long-term employee, the ADA does not require a company to create a position to accommodate people with disabilities. The only thing it does require is a transfer to an open position which the candidate is qualified for. While speaking with Adam he shared, “They also mentioned the option to apply for jobs if I was physically able to complete them, but I am not unless they accommodate them to my skills.”

However, that doesn’t mean that Walmart hasn’t had its fill of lawsuits from the  U.S. Equal Employment Opportunity Commission. In 2017 the federal agency sued on the allegation that Walmart fired a longtime store employee with a developmental disability and that same year Walmart fired an employee with Down Syndrome for showing up late to work after changing her work schedule after 15 years.

Adam isn’t the first Walmart greeter to be pushed out of a job due to his disability. Just 100 miles away in East Stroudsburg, Pennsylvania, Danny Ockenhouse knows exactly what Adam is going through. Back in 2016, the Walmart greeter was fired after twenty years of working with the company because (guess what) the company was changing the role of greeter and he could no longer perform his job in a wheelchair.

Danny, who also has cerebral palsy, shared that he loved his job, “Would I work all total 20 years for a place I didn’t?” he shared with NY Daily News. Management was unable to find him a new position at the company and ultimately had to let him go. Now Danny spends his time volunteering for the Salvation Army, greeting people as they shop.

Standing Up For Adam

Jose Lopez, a disgruntled neighbor, and friend, is sharing Adam’s story on Change.com, a website designed to share petitions and so far over 11,000 people have signed the petition. There’s a Facebook group sharing their support for Adam called, Team Adam. The social media group has been pushing to get Adam’s story out in the media and share the inequality he is facing. A recent post shared that Adam’s family is set to meet with Walmart management to discuss his working situation.

When asked if he could say anything to Walmart Adam answered thoughtfully, “I love Walmart and I love my job. All I want is to keep my job.”

A beloved, longtime Walmart greeter with cerebral palsy met with store management in Pennsylvania on Friday in a bid to keep his job but came away with no guarantees, and his family is girding for a fight.

Adam Catlin, who uses a walker and is legally blind, is worried he’ll be out of work after store management told him he would need to be able to lift heavy weights, read receipts and perform other tasks. The retailer has been replacing “people greeters” with “customer hosts” who are responsible for helping with returns, checking receipts to help prevent shoplifting, and keeping the front of the store clean.

Catlin, 30 — who has been a fixture at the Selinsgrove store since graduating from high school — and his family met with Walmart officials for two hours Friday afternoon. His mother, Holly Catlin, said management suggested several other open positions, including cashier and photo lab assistant, none of which he is physically capable of doing.

She said she insisted her son could do the host job if Walmart would make reasonable accommodations, as required by federal disability law. “Everyone was very nice, it wasn’t ugly at all, but we didn’t really get anywhere,” Holly Catlin said. “I don’t know where we stand, but I’m not backing down. He must still have a job. There’s just no way around it.”

Walmart said it’s working with Catlin on a resolution. “We recognize this is a unique situation and it will take time to explore possible solutions. As we phase the greeter role out of this store over a 60-day period, our store management and local human resource teams will be in regular contact with Adam and his family as we explore every available option to him,” said Walmart spokesman Kory Lundberg. “We will be thoughtful during the process in hopes of finding a way for Adam to stay with the store.”

At least a dozen disabled Walmart greeters in seven states — Illinois, New York, Pennsylvania, South Carolina, Texas, Utah and Wisconsin — say they were pushed out the door, forced to accept lower pay or otherwise harmed when the retailer replaced the greeter job with host, according to the National Disability Rights Network, whose state affiliates are working with impacted employees, and in some cases suing Walmart.

The issue exploded into public view after Catlin’s mother wrote an impassioned Facebook post this week, and thousands of people have since rallied to his cause.

Holly Catlin said she has personally heard from 25 or 30 disabled Walmart greeters who told her they have lost their jobs. “What makes me really sad is if we fix this for Adam, there are still those 25 or 30 people who are still out of a job and don’t know where to turn. It makes me sick,” she said. “I feel I need to go to bat for them.”