Maybe they’re seeking a miniseries or an after-school special. We don’t know, but this couple — er, ex-couple — sure have a flair for the dramatic.

Harrison Bach and his ex-girlfriend, Jackie, decided a simple breakup would not do. They captured their final, somber moment together with a very strange photo shoot.

The solemn shots of the two failed lovers quickly became an internet sensation and instant meme fodder when Bach posted them Monday.

“It ended up being really real emotions and we got kind of sad,” he told Mashable.

My buddy from wmu took "break up photos" ?? Like they broke up. And took photos pic.twitter.com/4G4HnagVeH

The couple actually called it quits a year ago. They were high school sweethearts who dated for more than three years, but split up when they were in college. Bach, 22, who attends Western Michigan University, had the idea for the shoot, and his ex was all for it.

RELATED: His girlfriend is about to lose it if she hears one more bad Disney pun out of him

He used a tripod to set up the camera, and the rest is breakup history.

“I see my friends who are in relationships doing really nice professional photography photo shoots,” Bach said. “I had the idea of doing the same thing in the same setting, but post-relationship, in a different way.”

Bach posted the photos to Facebook, and then a friend put them on Twitter, where they quickly became a sensation.

RELATED: This guy’s adventure with his drunk, nugget-diving girlfriend is legendary

when ur gf comes back from the war but she's not the same pic.twitter.com/RO8Xhdq8GE 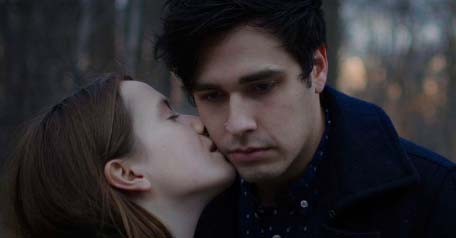