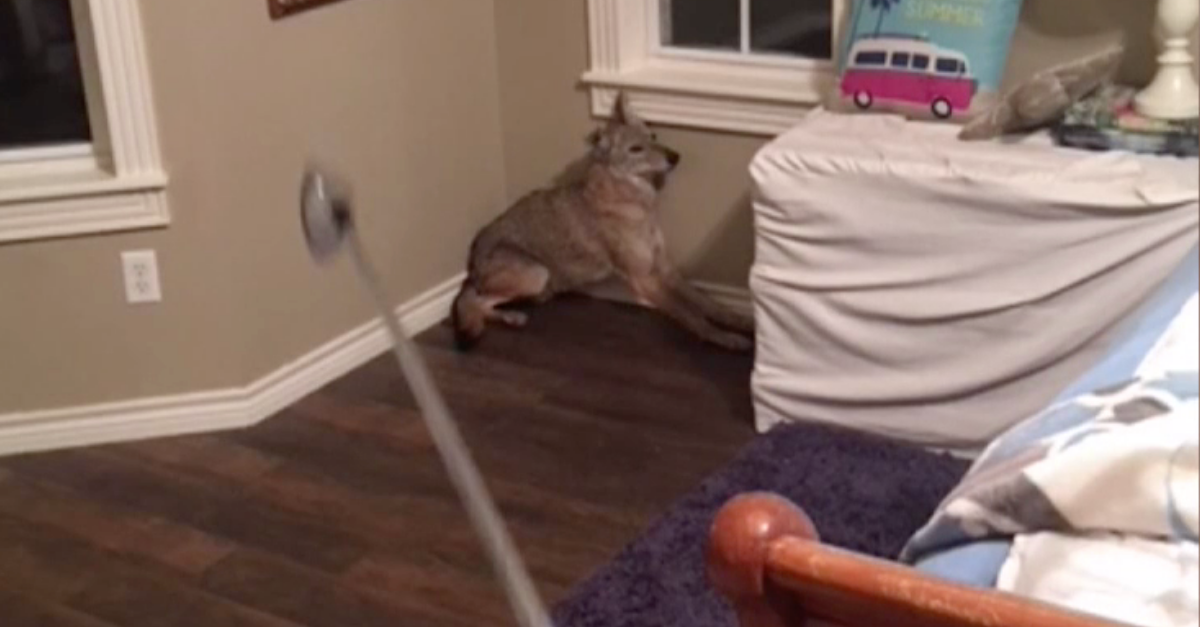 An Oklahoma woman wakes up to a decently unpleasant surprise at 4 a.m. the other night. A coyote. In her bedroom. Not fun! Not as terrifying as a bear or a mountain lion — that would likely end in the worst possible way to die in your sleep — but definitely worse than a raccoon or possum. Bonnie Moriarty of Bixby, Oklahoma, initially awoke to her cat screeching and the sound of a chase. She assumed it was her dog and cat getting into a scuffle in the middle of the night.

But nope. Instead of her miniature Schnauzer, a coyote ran into the bedroom after her cat for a cat fight. Bonnie jumped out of bed and grabbed a golf club for protection. The coyote, however, was now pretty nervous and stayed in the corner of the room. Bonnie was even less thrilled with the situation than the coyote. According to her, her screams woke up her kids.

According to FOX, after she collected herself (and snapped some pictures of the wild predator in her bedroom) Bonnie left her bedroom and trapped the coyote inside. Then she called the Bixby police officers.

When animal control came, corralled the wild coyote, and, presumably after cleaning up some nervous and smelly coyote pee, everything was back to normal in the Moriarty home. Bonnie thinks the coyote was in the backyard chasing her cat when it forced its way through the glass back door to get to her pet. Maybe that’s the real reason you don’t let the cat out at night anymore in rural Oklahoma in case? Are you trying to get it killed? That thing has got to be dodging coyotes and owls all night.

While it’s common for coyotes to attempt to attack people’s pets, it’s extremely unusual for them to actually go inside. Clearly this was one delicious looking cat, though, because the coyote went all velociraptor and figured out how to get through a closed-door. Clever girl.

Editor’s note: This article was originally published on September 10, 2018.