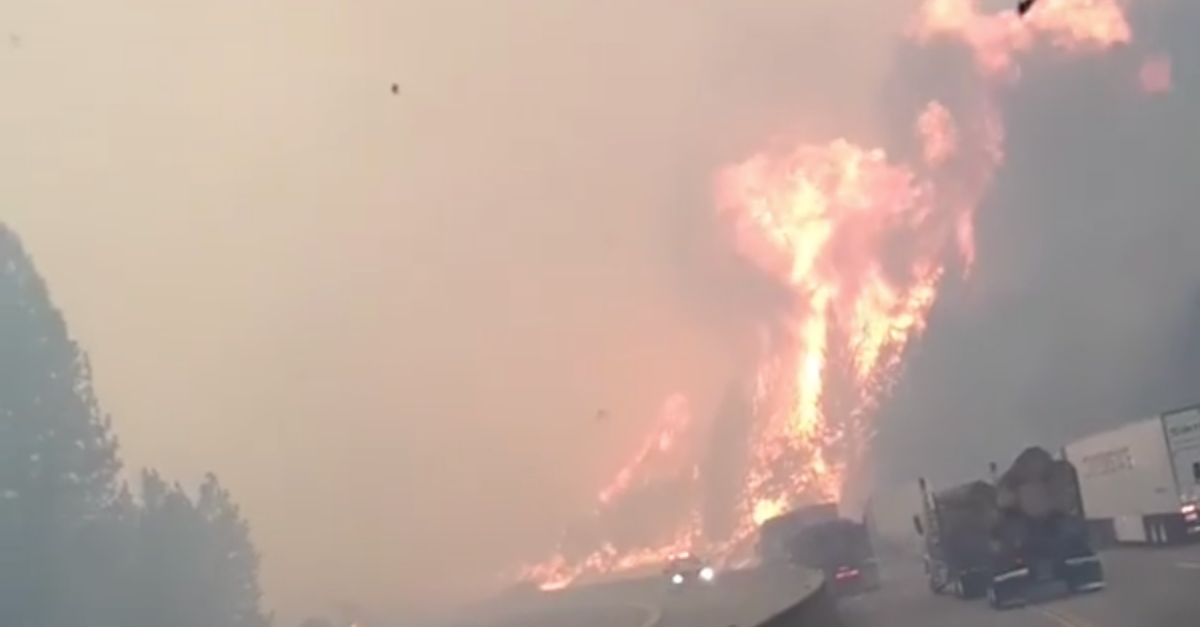 Ever drive into the mouth of hell? It probably looks something like what this woman saw while driving down Interstate 5 near Lakewood, California, right into the Delta Fire. The woman, Instagram user @narraf3000, recorded her ride toward the Northern California fire from the passenger seat while an unnamed, unseen male drove. In the videos, the woman goes from curious to concerned to scared absolutely shitless pretty quickly. A raging wildfire will do that.

Warning: The videos have NSFW language.

This is the correct reaction to a wildfire roaring in your direction. If anything it’s understated. This should be met with immediately throwing their car in reverse and slamming on the gas. There’s a wildfire coming right at them and they’re basically inside of a coffin that’s also a bomb. You can’t just sit there and watch that! Run!

Being chased by a tornado would be less terrifying. With a tornado, you can jump in a ditch or hide in a building that looks sturdy. There is nothing that allows you to hide from an inferno. It will cook you, or melt you, or roast you alive. Those are your only options.

The Delta Fire is a fast-moving wildfire 160 miles north of Sacramento. It’s currently burning on both sides of Interstate 5, near the highway’s Vollmers exit. It was first reported on Wednesday afternoon near Lakehead, California. As of now, the fire has shut down northbound and southbound sections of I-5, from 10 miles north of Redding at Fawndale Road to four miles south of Mount Shasta at Mott Road. It’s about ten miles from the Hirz Fire, another, larger wildfire in the area, roughly 46,142-acres in size and burning in the Shasta-Trinity National Forest.

Authorities believe the weather will continue to be hot and dry, with gusty winds moving through the area, and that the conditions mean the fire may continue to spread.

So, uh, if you’re in California and planning on driving up to Oregon this weekend, definitely don’t.