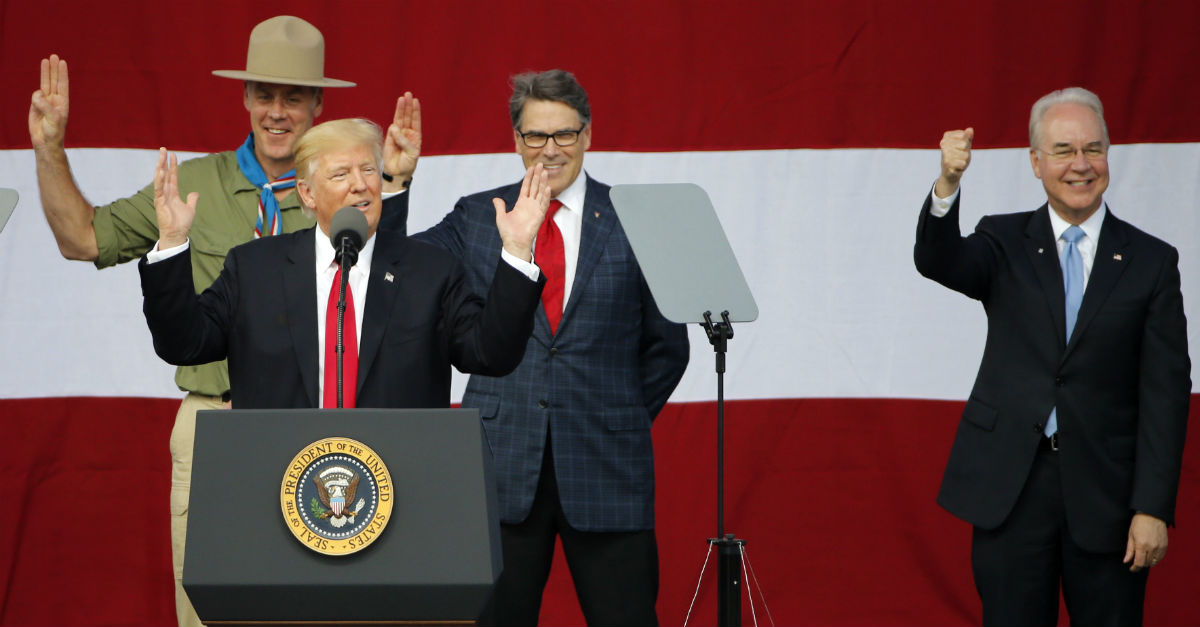 On Monday, president Trump ventured into West Virginia to speak at the annual Boy Scout Jamboree, which drew tens of thousands of scouts. During his speech, Trump bashed the media and Obama and boasted about his election victory, calling Nov. 8, 2016, “a beautiful date.” At one point, Trump mentioned meeting New York super-developer William Levitt at a cocktail party.

Trump seemed to win the support of the crowd from the beginning. He arrived to riotous applause and got the scouts to boo President Obama when he asked, “Did President Obama ever come to a jamboree?” Obama never spoke at one of the jamborees while he was president, though he did record a video message for the scouts on one occasion.

RELATED: Hours after Trump embarrassed Jeff Sessions, Lindsey Graham came out to stand up or his friend

The Boy Scouts of America Facebook page was flooded with comments by parents who blasted Trump’s appearance, even on posts unrelated to the rally. One woman wrote, “Done with scouts after you felt the need to have my kid listen to a liar stroke his ego on our time.” Another said, “I can’t believe the Boy Scouts booed a living American president.” There were a number of comments calling the speech “propaganda,” and some even made comparisons to Hitler’s youth rallies.

Tragically, #boyscouts in 2017 applaud Trump just like the all blonde blue eyed youth did for Hitler in the 30's.

I feel like I've seen what is happening at the #BoyscoutJamboree before… pic.twitter.com/BfdnB5XaQM

He's so far beyond the usual bounds of even vulgar politicians' vulgarity… https://t.co/hdHYsqPYwo

John McLaughlin, who led the CIA under George Bush, tweeted that the jamboree “had the feel of a third world authoritarian’s youth rally.” CNN’s Chris Cillizza published a list of “The 29 most cringe-worthy lines from Donald Trump’s hyper-political speech to the Boy Scouts.” The piece included included statements such as “You know we have a tremendous disadvantage in the Electoral College — popular vote is much easier” and “I went to Maine four times, because it’s one vote, and we won. But we won — one vote. I went there because I kept hearing we’re at 269.” New York Magazine published a similar list, though they only included 14 “inappropriate moments.”

However, Trump’s supporters backed the president’s appearance and branded the backlash as another attack by the mainstream media and “leftists.”

So Leftists who think Boy Scouts should include girls and tried to kill the org over gay scoutmasters are mad at Trump's #BoyScoutSpeech.

The Boy Scouts released the following statement after the backlash to Trump’s speech:

“the boy scouts of America is wholly non-partisan and does not promote any one position, product, service, political candidate or philosophy. The invitation for the sitting U.S. President to visit the National Jamboree is a long-standing tradition and is in no way an endorsement of any political party or specific policies.”