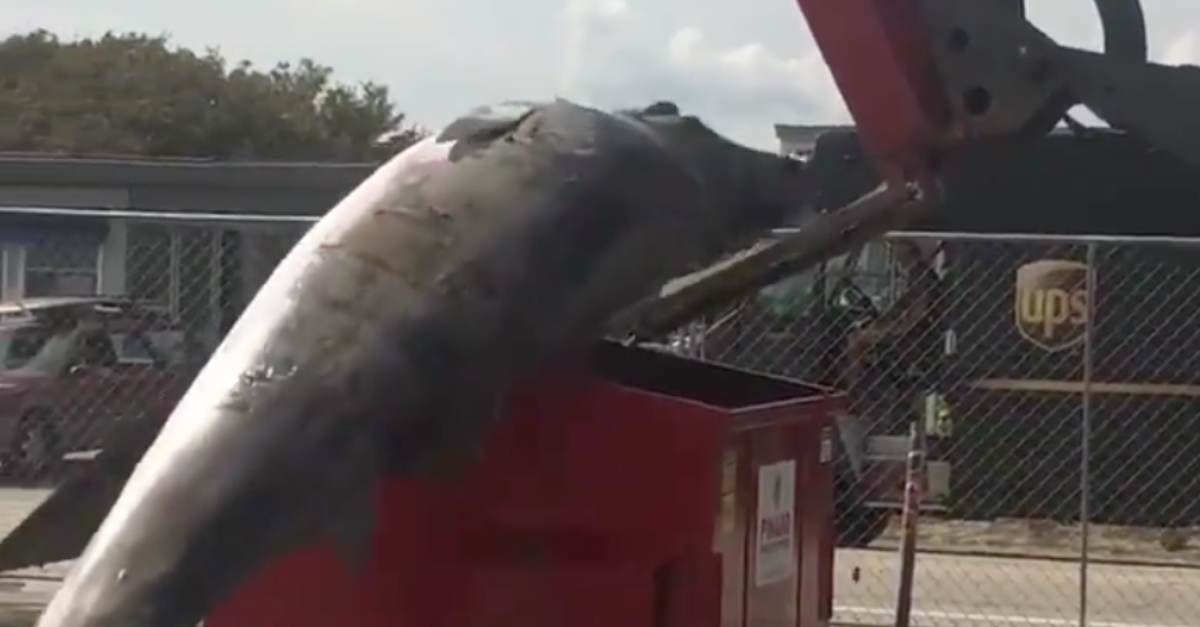 A dead juvenile male minke whale washed ashore at Jenness Beach in Rye, New Hampshire on the morning of Monday, September 17th and it, uh, did not appear to have the most dignified of disposals. Authorities were trying to drop the whale’s corpse into a dumpster, with a forklift, but the dumpster wasn’t quite big enough and the forklift driver didn’t exactly throw a strike with the dead baby whale’s corpse. (This whale had just about the Monday-est Monday ever.)

Though this video appears to be showing maybe the most disturbing and inappropriate way imaginable to dispose of a majestic sea creature‘s dead body short of filling a dead manatee’s mouth and butt with dynamite and blowing it into a million tiny pieces, there is actually a method to this madness. Don’t worry, it’s not standard operating procedure to ditch dead whales in KFC dumpsters and then peel out of there in your forklift.

It turns out the whale was being put in the dumpster so that it could be sent off to have a necropsy performed on it in order to determine the cause of death. The Seacoast Science Center’s Twitter account explained as much to a concerned viewer on the social media platform.

The whale was being put in a dumpster to transport it to an appropriate site to perform a necropsy, to try and pinpoint cause of death. Following the necropsy tomorrow, the whale's body will be composted at prearranged facility.

Still though, what a sight. Even the staunchest of proponents of, say, drilling for oil on a puppy farm without relocating the puppies in order to cut down on costs can’t watch this video and not feel a little queasy for the whale. Poor fella. It just wants to bloat and be eaten by seagulls and crabs in peace before finally exploding and rolling back into the ocean.

As the Sea Coast Science Center said, though, after the necropsy and other research on the whale is completed it will be laid to rest in a dignified, peaceful manner.

This story was originally published September 24, 2018.